In 1913 the Secretary of Agriculture, David F. Houston, was worried about the decline in the number of Americans living on farms and determined to make rural life more ‘comfortable, healthful, and attractive,’ so he sent out a survey asking farmwomen what the US Department of Agriculture might do for them. He got some surprising letters back.

There were plenty of requests for plans for efficient kitchens and methods for banishing pests, but there were also letters that revealed how much American women hungered for beauty in dress. A girl would not be so eager to leave the farm, wrote a lady from Tennessee, if she ‘could really see that there is an art in the farm life, and that she can dress as prettily and have her home as neatly furnished as the city girl can.’”

A 1915 report documented the results from this U.S. Department of Agriculture survey of rural women and men on their clothing needs: 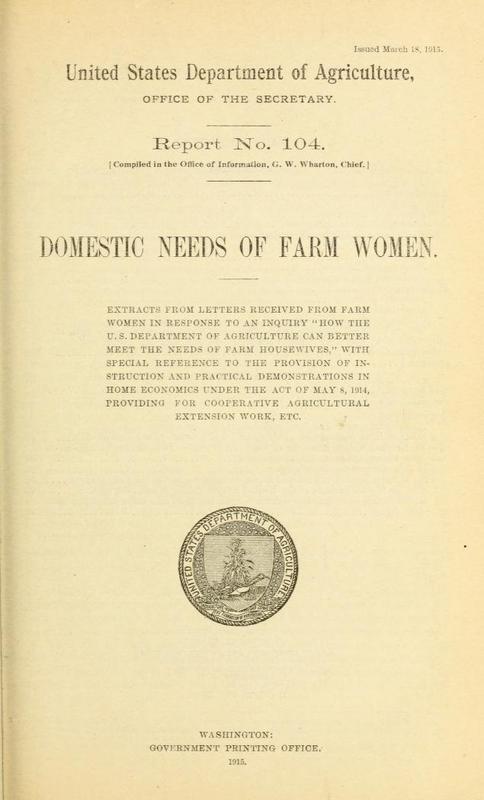 Extracts From Letters Received From Farm Women in Response to an Inquiry "How the U.S. Department of Agriculture Can Better Meet the Needs of Farm Housewives." With Special Reference to the Provision of Instruction and Practical Demonstrations in Home Economics Under the Act of May 8, 1914, Providing for Cooperative Agricultural Extension Work, Etc.

-- U.S. Department of Agriculture. Office of the Secretary. Report Number 104

Here are some sample comments:

As a farmer's wife and mother of two children, I feel that any help in regard to sewing would be greatly appreciated, as I find that as hard as any of the work that falls to my lot.

-- A woman from New York

Not more than 50 per cent of the country women know how to sew properly and this fact causes the farmer to lose many dollars every year, as many costly pieces of cloth are ruined, not being made right. The demonstration agent could render valuable service here by giving the farm women lessons in dressmaking and the best patterns to go by. This would tend to elevate the family as any family will go to church, and other places more if they are fixed neatly.

-- A man from Louisiana

In addition to "lessons in dressmaking," the Bureau's staff did indeed provide assistance in the "best patterns to go by." The Bureau's home economists developed sewing patterns for work clothes that were both functional and attractive.

Clarice Louisba Scott, a home economist in the Clothing and Textiles Division, layed out the Bureau's philosophy of clothing design in her piece, "Clothing That Works."

American women...want clothes planned and made for the different kinds of work they do--functional work clothes that are comfortable, safe, and practical, but handsome, too....Functional work clothes do more than just make work easier. They are planned so that keeping them in order takes a minimum of time and energy. They have to be pleasing to look at. To make this possible, simplicity is the thing....When the public realizes this and demands scientifically designed work clothes, manufacturers will make them. Meanwhile, homemakers who sew need not wait. For them, cooperating commercial companies have made patterns for designs developed in the course of this research. 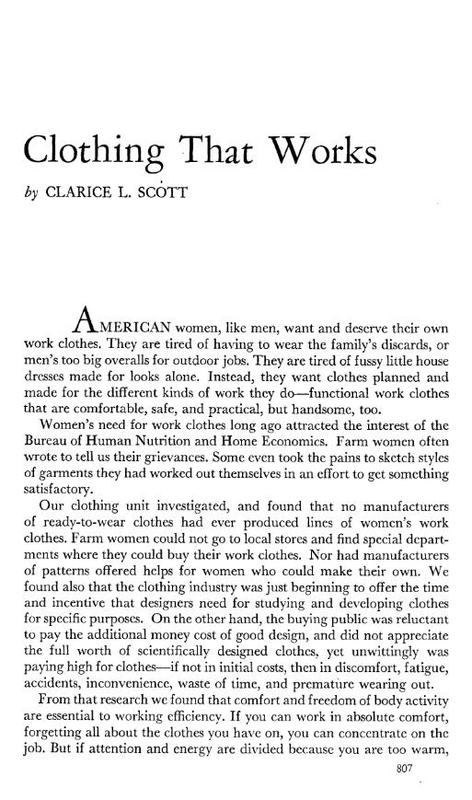 The research performed by the Division of Clothing and Textiles was documented in a series of articles, reports, and pamphlets.

The designs described in these publications were then commercially marketed by various pattern-makers.

The next section of the exhibit shows these patterns as they were sold to consumers, along with the way they were first described in the Bureau's publications.