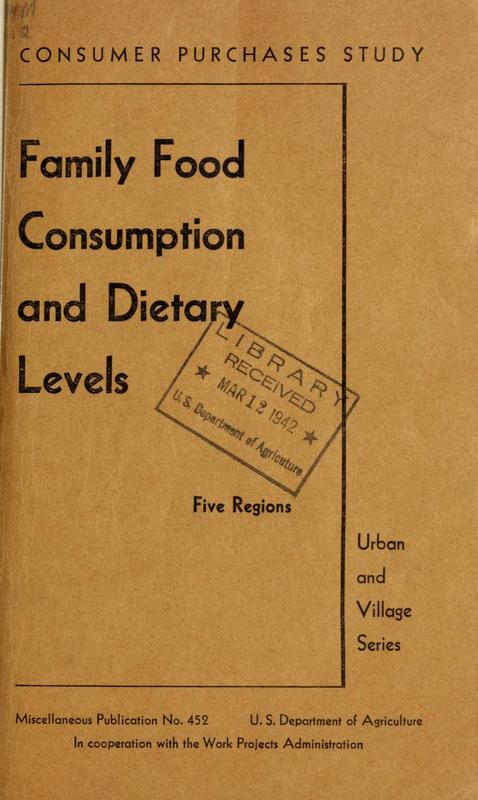 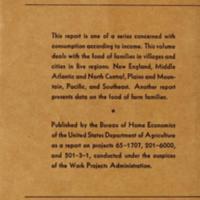 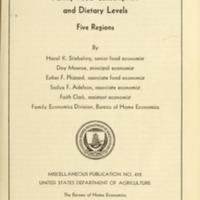 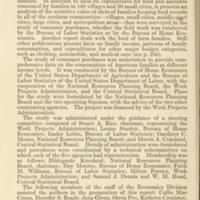 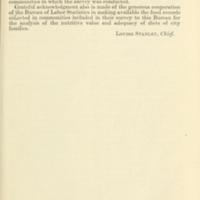 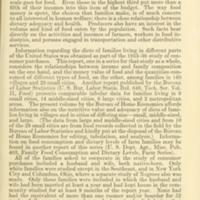 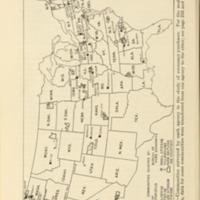 Food consumption is a subject of universal and perennial interest. About half of the income of families in the lowest third of the income scale goes for food. Even those in the highest third put more than a fifth of their incomes into this item of the budget. The way food money is spent, the choices that families make, is of much concern to all interested in human welfare; there is a close relationship between dietary adequacy and health. Producers also have an interest in the volume and kind of food eaten by the population. Such facts bear directly on the activities and incomes of farmers, workers in food industries, and persons engaged in transportation and other distributive services.

Information regarding the diets of families living in different parts of the United States was obtained as part of the 1935-36 study of consumer purchases. This report, one in a series for that study as a whole, considers the relationships between income and family composition on the one hand, and the money value of food and the quantities consumed of different types of food, on the other, among families in 140 villages and 20 small cities. Another report published by the Bureau of Labor Statistics (U. S. Bur. Labor Statis. Bui. 648, Tech. Ser. Vol. II, Food) presents comparable tabular data for families living in 9 small cities, 14 middle-sized cities, 6 large cities, and 2 metropolitan areas. The present volume by the Bureau of Home Economics affords information also on the nutritive value and adequacy of diets of families living in villages and in cities of differing size — small, middle-sized, and large. (The data from large and middle-sized cities and from 10 of the 29 small cities are from food records collected in the field by the Bureau of Labor Statistics and kindly put at the disposal of the Bureau of Home Economics for editing, tabulation, and analysis.) Information on food consumption and dietary levels of farm families may be found in another report of this series (U. S. Dept. Agr., Misc. Pub. 405, Family Food Consumption and Dietary Levels, Farm Series).

All of the families asked to cooperate in the study of consumer purchases included a husband and wife, both native-born. Only white families were studied except in the Southeast, and in New York City and Columbus, Ohio, where a separate study of Negroes also was made. Only those families were included in which the husband and wife had been married at least a year and had kept house in the com-munity studied for at least 9 months of the report year. None had had the equivalent of more than one roomer and/or boarder for 52 weeks of the report year, and none had received relief during that period.

The eligibility requirements just mentioned, and others, minor in character, served to eliminate from this study relatively more of the families with low incomes in each community than of those in the higher income classes. Common observation and special studies of the excluded groups indicate that the groups studied — the native-white, unbroken, nonrelief families — generally are in better circumstances than those omitted from the study — the foreign-born and the broken families, those receiving relief, the one-person families, the very large families, and Negro families (included in the Southeast). The differences between the groups studied and the total population should be recognized in using the expenditure and consumption data of this volume. (See Methodology and Appraisal, Applicability of Data from the Consumption Sample.)

The villages and small cities included in the study are situated in five broad geographic regions — -the New England, the Middle Atlantic and North Central, the Plains and Mountain, the Pacific, and the Southeast. 1 Within these regions the villages chosen are closely associated with the counties selected for the study of farm families. They are located either in the same or in nearby counties where agricultural conditions were similar. Each group of small cities selected was chosen to be representative of some of the outstanding characteristics of the area; for example, the group might include one with a State university or college ; one that was an important marketing center for an agricultural area ; and one that was an active industrial city. Economic activities, cultural patterns, proportion of native-white families in the population, and relationship to other cities within the region were among the factors considered in selecting specific cities for this study. Figure 1 shows the geographic location of the communities surveyed in this study by the Bureau of Home Economics and the Bureau of Labor Statistics.