The Division of Textiles and Clothing: Ruth O'Brien 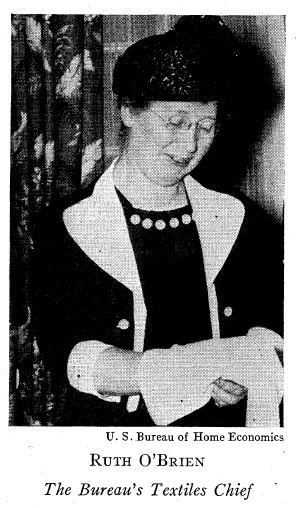 Ruth O'Brien was the first head of the Textiles and Clothing Division and eventually was named Assistant Chief to Hazel K. Stiebeling.

Her area of expertise was textile chemistry. She also worked on the development of standard sizes for commercially-sold clothing and fabric selection for the home sewer.

O'Brien held Bachelors and Masters degrees in chemistry, along with a law degree from George Washington University so she could engage "in negotiations with manufacturers, retailers, and other government agencies," (Goldstein, C. (2012) Creating Consumers: Home Economists in Twentieth-Century America. Chapel Hill: The University of North Carolina Press. p. 76).

Here is a sample of the publications she authored while working in the Bureau: 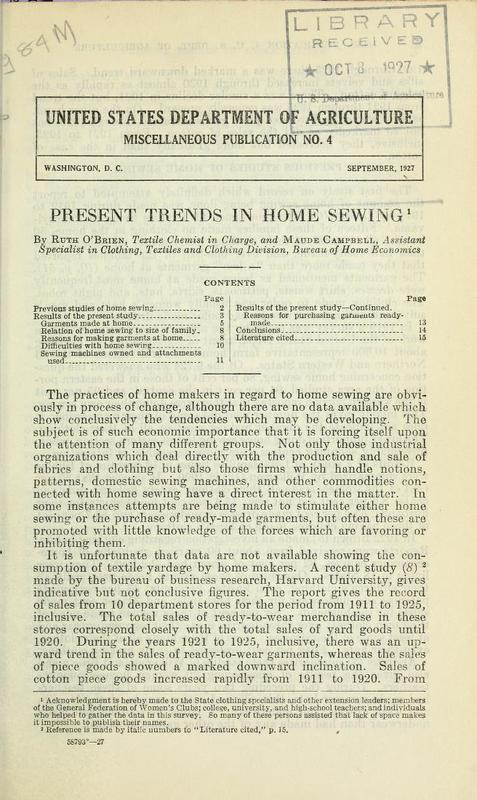 "The practices of home makers in regard to home sewing are obviously in process of change, although there are no data available which show conclusively the tendencies which may be developing. The subject is of such economic importance that it is forcing itself upon the attention of many different groups. Not only those industrial organizations which deal directly with the production and sale of fabrics and clothing but also those firms which handle notions, patterns, domestic sewing machines, and other commodities connected with home sewing have a direct interest in the matter. In some instances attempts are being made to stimulate either home sewing or the purchase of ready-made garments, but often these are promoted with little knowledge of the forces which are favoring or inhibiting them.

It is unfortunate that data are not available showing the consumption of textile yardage by home makers. A recent study (8) 2 made by the bureau of business research, Harvard University, gives indicative but not conclusive figures. The report gives the record of sales from 10 department stores for the period from 1911 to 1925, inclusive. The total sales of ready-to-wear merchandise in these stores correspond closely with the total sales of yard goods until 1920. During the years 1921 to 1925, inclusive, there was an upward trend in the sales of ready-to-wear garments, whereas the sales of piece goods showed a marked downward inclination. Sales of cotton piece goods increased rapidly from 1911 to 1920. From 1921 through 1925 there was a marked downward trend. Sales of silks and velvets increased through 1920 almost as rapidly as the sales of cotton. There was a similar decline in 1921, but the trend from 1921 through 1925 was generally upward. On the other hand, sales of woolen and worsted piece goods increased through 1920, but notso markedly as did the sales of cotton. From 1921 to 1925, inclusive, they decreased but more gradually than in the case of cotton." 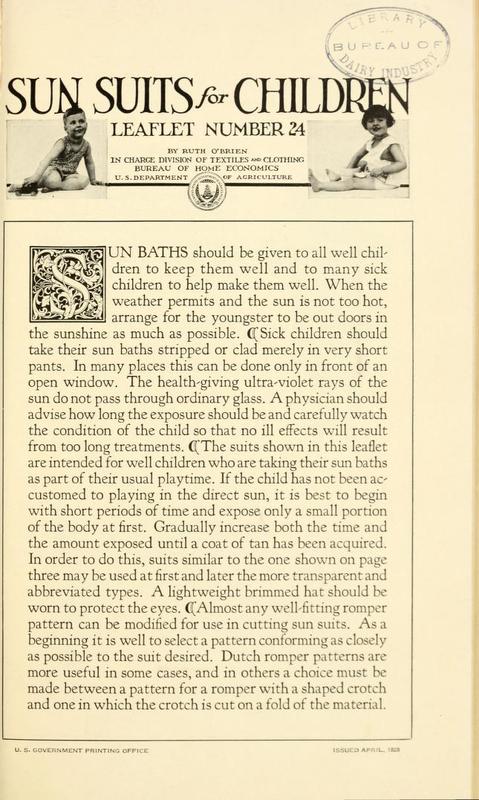 "Sun baths should be given to all well children to keep them well and to many sick children to help make them well. When the weather permits and the sun is not too hot, arrange for the youngster to be out doors in the sunshine as much as possible. Sick children should take their sun baths stripped or clad merely in very short pants. In many places this can be done only in front of an open window. The health-giving ultra-violet rays of the sun do not pass through ordinary glass. A physician should advise how long the exposure should be and carefully watch the condition of the child so that no ill effects will result from too long treatments. The suits shown in this leaflet are intended for well children who are taking their sun baths as part of their usual playtime. If the child has not been accustomed to playing in the direct sun, it is best to begin with short periods of time and expose only a small portion of the body at first. Gradually increase both the time and the amount exposed until a coat of tan has been acquired. In order to do this, suits similar to the one shown on page three may be used at first and later the more transparent and abbreviated types. A lightweight brimmed hat should be worn to protect the eyes. ((Almost any well-fitting romper pattern can be modified for use in cutting sun suits. As a beginning it is well to select a pattern conforming as closely as possible to the suit desired. Dutch romper patterns arc more useful in some cases, and in others a choice must be made between a pattern for a romper with a shaped crotch and one in which the crotch is cut on a fold of the material." 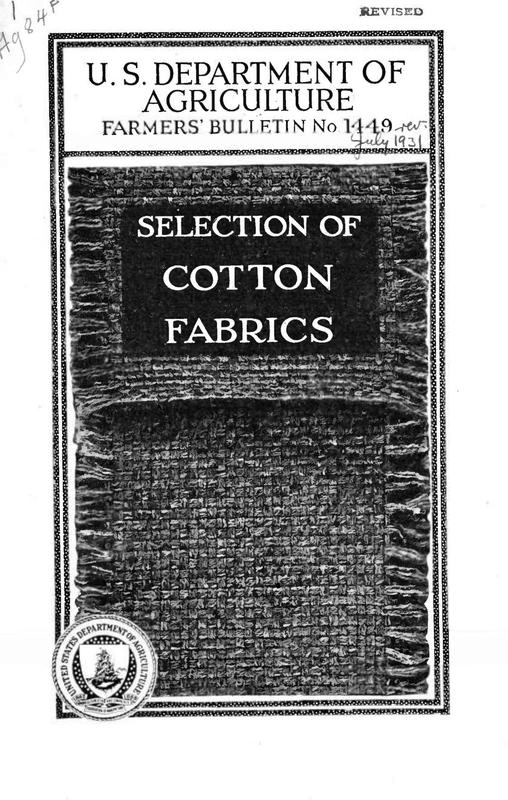 "The greater proportion of textiles bought by the average family and most of the garments made in the home are of cotton. Therefore, the careful selection of these materials means the saving not only of money but also of time and effort of the housewife. This bulletin gives information concerning those details of cotton-fabric composition and construction which determine the durability and general usefulness of such materials. It also contains a list of cotton fabrics classified according to their appropriate uses and a glossary of the more important materials." 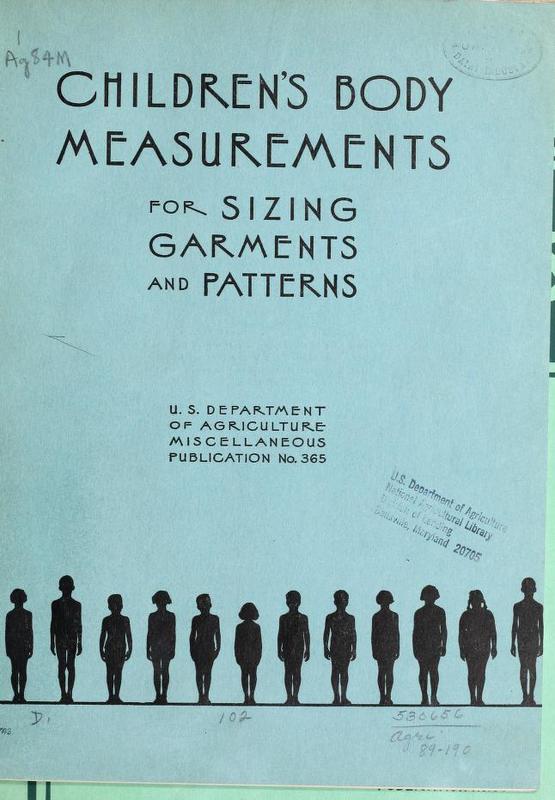 Children's Body Measurements for Sizing Garments and Patterns: A Proposed Standard System Based on Height and Girth of Hips (1939)

O'Brien, Ruth and Girshick, Meyer A.

"The rapid growth of the pattern and ready-to- wear industry in the United States has brought with it many difficulties in the proper sizing of garments and patterns, especially those manufactured for women and children. Any satisfactory American sizing system must be based on dimensions obtained by measuring large numbers of persons throughout the country. Each measurement must be made in exactly the same way by individuals carefully trained in a method that can be duplicated. The same kind of instruments must be used, and these must be constantly checked so that they are accurate.

Unfortunately no such large, scientific study of the body measurements used in the construction of women's and children's garments has ever been reported. When funds were made available by the Works Progress Administration in 1937, the Bureau of Home Economics, therefore, organized and directed such a cooperative research project. The measurements used in the construction of trunk garments were taken on 147,088 children, 4 to 17 years of age, inclusive, distributed in 15 States and the District of Columbia.

This proposed standard of body measurements is based on the results of that study. It recommends dimensions to be used in constructing a series of standard mannequins such as are used by manufacturers to size garments and patterns. The measurements were taken next to the skin. The proposed standard, therefore, does not give garment and pattern dimensions. Standards for these can be developed from this proposed basis by agreement in the trade on tolerances for construction, style, and other clothing features." 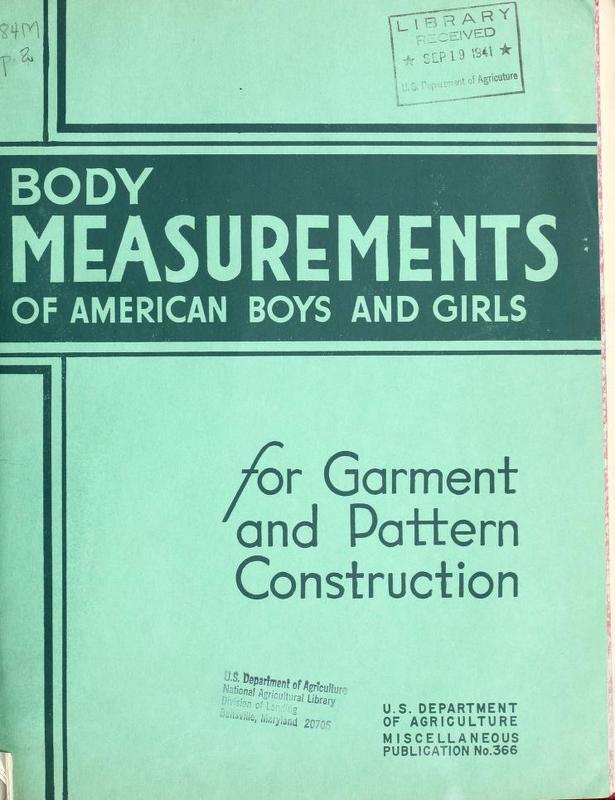 Comprehensive Report of Measuring Procedures and Statistical Analysis of Data on 147,000 American Children (1941)

"This study, financed by the Works Progress Administration and conducted as a W. P. A. project, was made in order to supply accurately taken body measurements for use in the construction of children's garments and patterns.

As a result of the difficulties in securing properly fitting children's clothing, retailers, especially mail-order companies, complain of huge annual losses due to large returns. These difficulties are caused partly by the lack of uniformity in the dimensions used by different manufacturers. Partly they are due to the fact that measurements for this purpose never have been taken with scientific accuracy on a representative sample of the child population of the country. Studies of body measurements have been restricted largely to growth and anthropological researches that have' not included the measurements used for garment sizes. The only published report of an American study of this kind with clothing construction definitely in view is the one made on 100,000 men during the demobilization at the end of the World War.

The idea has long prevailed that if a scientific study were made of the body measurements of a representative sample of children, the dimensions of a hypothetical "average" child of each age could be assembled. This together with perhaps an average chubby and an average slim child of the same age, might then solve the fitting problem. This study was initiated, therefore, not only to obtain scientifically taken measurements of a large and representative sample of children, but also to analyze the variations of these dimensions in order to determine the most satisfactory basis for sizing children's garments and patterns." 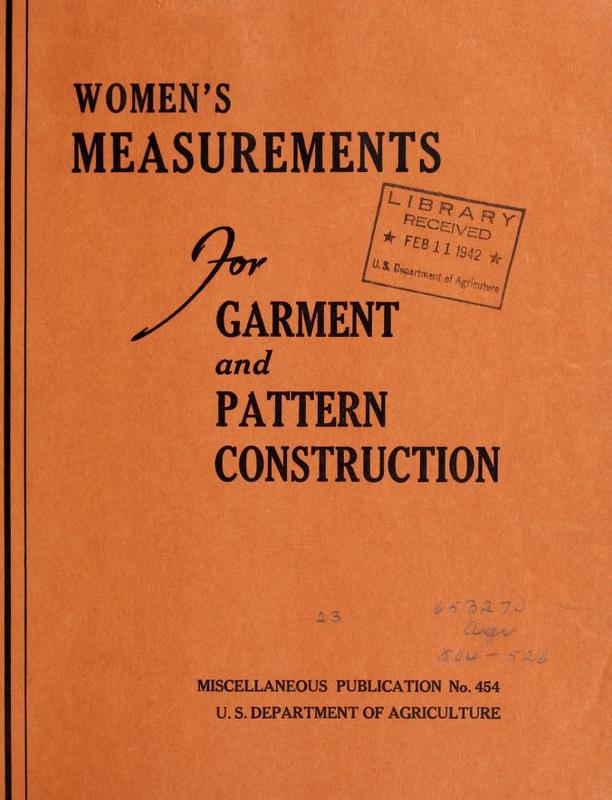 "This research project was undertaken in order to provide measurements which could be used for improving the fit of women's garments and patterns. No scientific study of body measurements used in the construction of women's clothing has ever been reported. The measurements used have grown up in the industry, apparently chiefly by trial and error, based on measurements taken on a few women by various inaccurate procedures. As a result, there are no standards for garment sizes, and retailers and consumers are subjected to unnecessary expense and harassed by the difficulties involved in obtaining properly fitting clothing.

Garments labeled the same size but made by different manufacturers vary greatly, and few of them fit without alteration. Women often have to add to the price of ready-made clothes large additional sums for alterations. In some cases, these may amount to as much as an additional 25 percent on the cost of a dress. Garments that cannot be fitted and altered where bought are often returned to the store because of wrong size. This means a loss of money and good will to the retailer and annoyance and waste of time to the woman purchaser. Mail-order houses have a large volume of such returns, which add to the cost of merchandise and work a hardship on rural homemakers who frequently must buy by mail.

To be satisfactory, garment and pattern sizing must be based on a practical and logical classification of body types. Therefore this study included not only the measuring of a large group of women, but also a detailed statistical analysis of the results. The latter was so planned as to provide data from which the garment and pattern industry can develop a system of sizes satisfactory to consumers and all branches of the trade. To this end, special attention was given to discovering key measurements of the body; that is, a few important measurements from which all the others can best be predicted.

Height seems to be the most practical vertical measurement to use in such a combination. It is the easiest one to take and is as accurate a predictor of other vertical measurements as is any other one measurement. However, no one girth measurement is as good a predictor of the other girths as is weight.
In other words, a stature-weight combination would be the best basis for classifying women's body types for the establishment of a standard system of garment and pattern sizes. Figures for setting up such a system are given in table 18. Data for alternative systems which would not be so generally satisfactory are also included in this report."