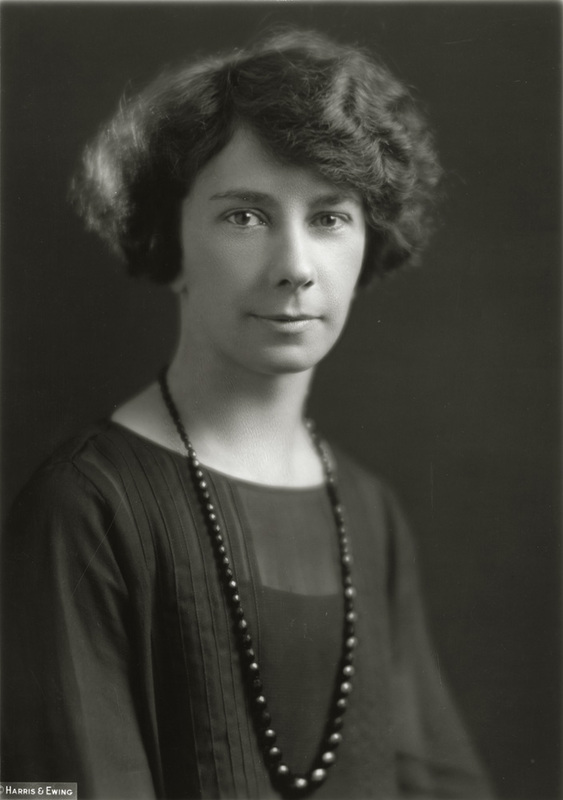 With the help of the extension and research staffs of several colleges, we have induced more than 2,000 homemakers to keep careful daily records of how they spent their time for seven days of a typical week. Most of these records came from middle-class homes—from farm and village women with whom the college extension service is in touch, and in smaller numbers from club-women in towns and cities....Five-sixths of these homemakers spent over 42 hours a week in their homemaking, more than half spent over 48 hours, and one-third spent over 56 hours. The average for all is slightly over 51 hours a week. If this be part-time work, what, one may ask, would be full-time?

The USDA Time-Use Studies produced several publications documenting the results of this research. Here are some representative items, along with some of their conclusions about homemakers' use of time. 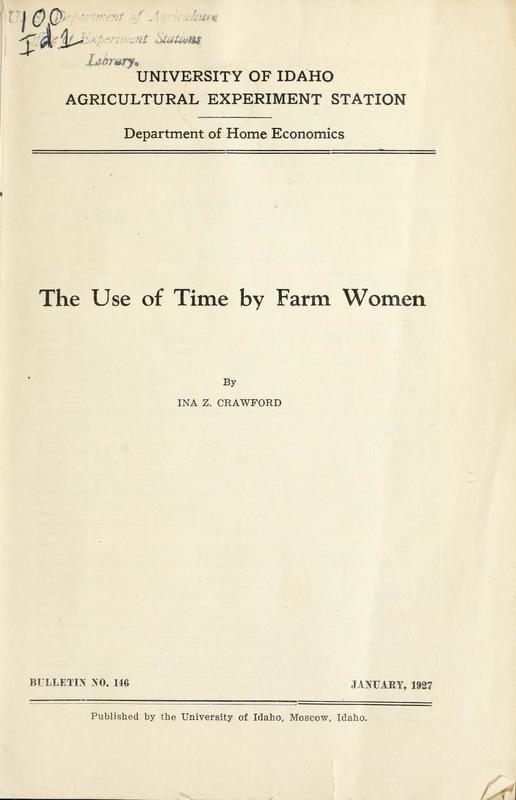 "The object of this investigation was to study the present use of time by homemakers, in order to further the more efficient management of time and to provide a greater amount of leisure. The University of Idaho Agricultural Experiment Station, with this purpose in view, made a survey of the use of time by Idaho homemakers, using the plans and blanks provided by the Bureau of Home Economics of the United States Department of Agriculture.

The procedure employed in making the study was to get seven-day reports from individual homemakers, in which were listed the activities which engaged their time for each of the seven days. Special blanks were used and the homemaker reported her activities in five- minute units, so that a detailed and complete record was available for the whole 24 hours a day for seven days. These specific entries were then tabulated, being put into 10 major classifications, as follows: Food, House, Clothing, Family, Management, Sleep and Rest, Self, Leisure, Other work, Miscellaneous." 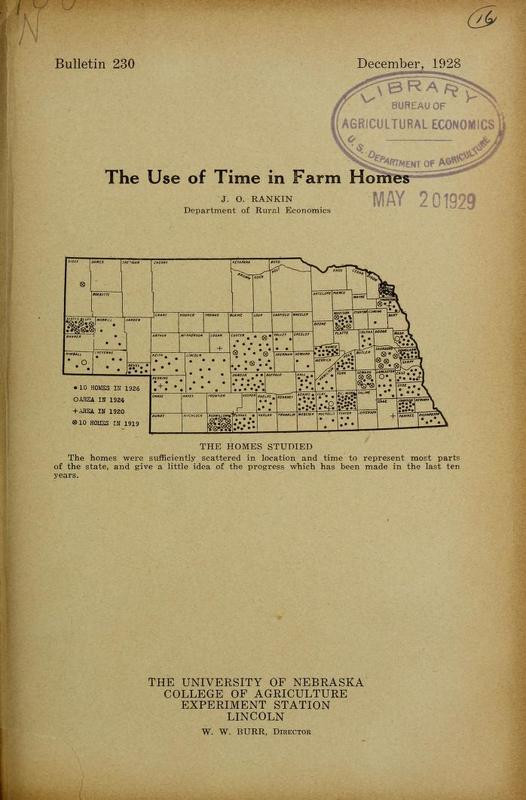 "How much time do farm people spend in the work of making a living and providing for the future, and how much in recreation, education, mere idleness, or in positively harmful practices? Nobody can give entirely satisfactory answers, but this bulletin attempts to throw some light on the problems involved. It presents part of the data gathered in a survey conducted largely for other purposes. It does not present a complete study of the use of time on farms but it does show in part how the men, women, and children on Nebraska farms use their time.

Time may be spent in (1) the business of getting the necessities of life, (2) accumulating a surplus, (3) recreation, (4) self-improvement, (5) mere idleness, or (6) harmful practices. Nebraska farm people probably spend more time in the first two and less in the last two of these ways than most non-farm people. Just what is the best use of time depends on circumstances and must be a matter of opinion. The purpose here is mainly to show how time is actually used rather than how it ought to be used." 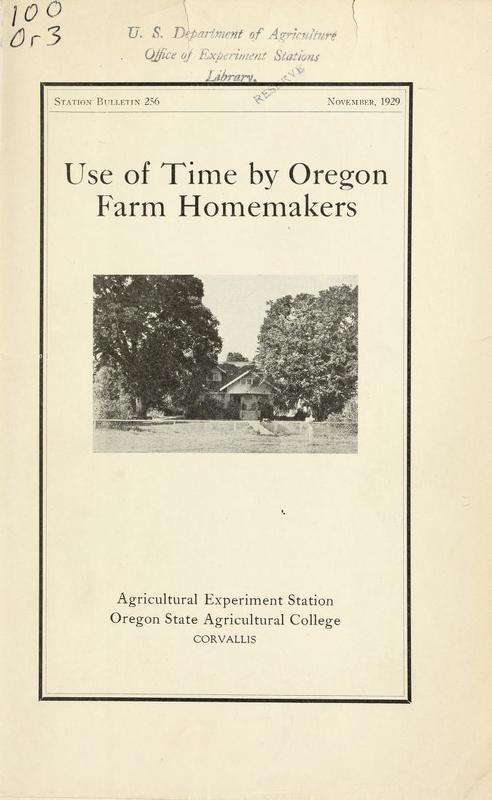 Use of Time by Oregon Farm Homemakers (1929)

The average work period of the farm homemaker was 63.7 hours per week, divided as follows: homemaking, 81 percent; farm work, 18 per- cent; other work, 1 percent. For 9 percent of the homemakers the work period was less than 50 hours; for 14 percent it was 75 hours or more. The average work day was 9.7 hours on week days and 5.5 hours on Sundays.

The 51.6 hours per week devoted to homemaking activities were distributed as follows: food activities, 47 percent; house, 18 percent; clothing and textiles, 22 percent; care of members of household, 7 percent; management, 3 percent; all other, 2 percent. Seventy-two percent of the homemaking time went to the routine activities of the household — meals, cleaning, fires, laundry, and mending.

Farm homemakers worked longer than non-farm homemakers, mainly because of their farm work in addition to their homemaking. Ninety-seven percent of them did some farm work, the average amount being 11.3 hours a week. The three farm enterprises to which the most time was devoted were dairying, poultry, and fruits and vegetables." 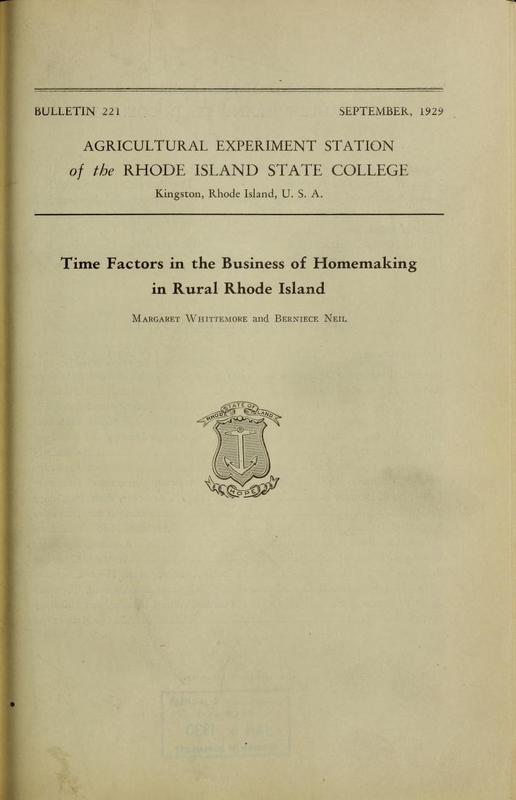 "A summary of the work of the rural Rhode Island homemakers whose records have been studied shows an average working day of 7 hours and 45 minutes in household activities. It should be remembered when comparing it with outside work that this is a 7-day per week schedule. A comparison with the figures quoted by Richardson 5 from a similar survey of the Bureau of Home Economics, U. S. Department of Agriculture, shows that the Rhode Island woman works nearly 3 hours a week more than the average. There is a daily average of 45 minutes work for financial gain. A few activities reported as miscellaneous would add a few minutes to the day’s record. According to the statements of the women who kept these records the old saying 'man works from sun to sun, but woman's work is never done' is no longer true." 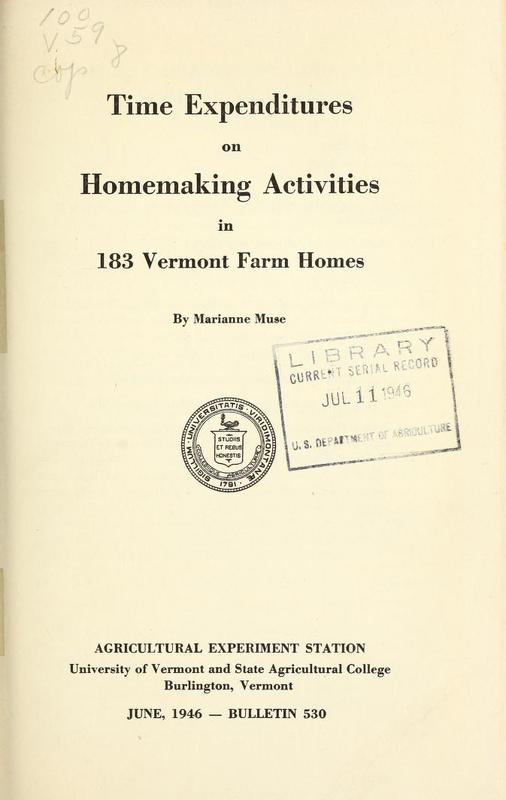 "The time spent on homemaking activities during a summer week on 183 farms in Chittenden County, Vermont, averaged 82 ½ hours.

The housewives contributed an average of 6454 hours, or 78 percent of all homemaking time. They spent 3 5 or more hours on homemaking activities in 96 percent of the cases. Their homemaking hours for the week ranged from 18 3/4 to 120 ¼.

Food preparation claimed a fourth of all homemaking time, and house cleaning, care, and upkeep received almost as much time. Dishwashing took 15 percent of the time. To these three classes of activities the housewife gave 28, 21, and 12 percent of her homemaking time and other persons 18, 25, and 28 percent of theirs. 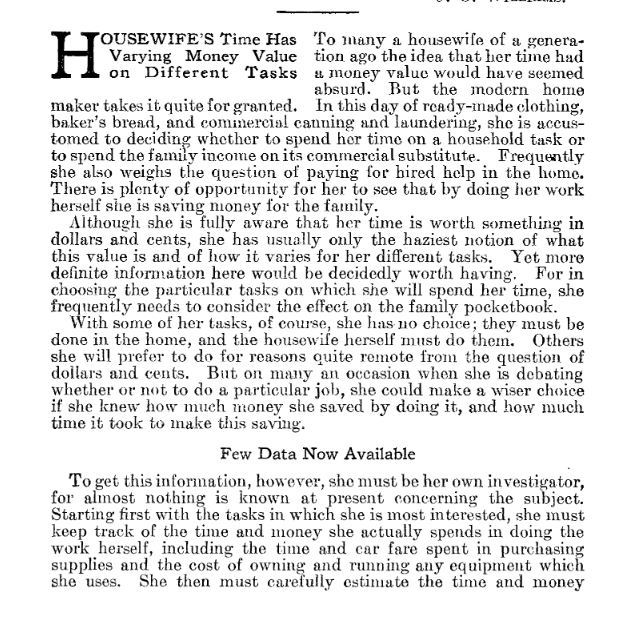 "To many a housewife of a generation ago the idea that her time had a money value would have seemed absurd. But the modern home maker takes it quite for granted. In this day of ready-made clothing, baker's bread, and commercial canning and laundering, she is accustomed to deciding whether to spend her time on a household task or to spend the family income on its commercial substitute. Frequently she also weighs the question of paying for hired help in the home. There is plenty of opportunity for her to see that by doing her work herself she is saving money for the family." 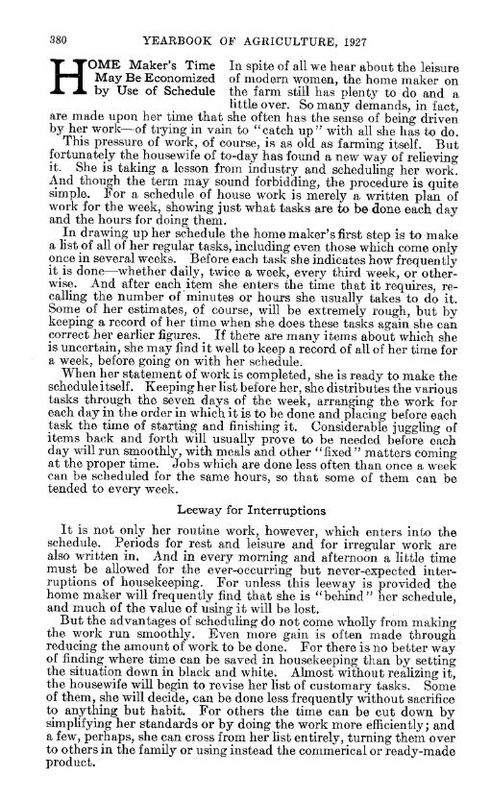 Home Maker's Time May Be Economized by Use of Schedule (1927)

"In spite of all we hear about the leisure of modern women, the home maker on the farm still has plenty to do and a little over. So many demands, in fact, are made upon her time that she often has the sense of being driven by her work--of trying in vain to "catch up" with all she has to do." 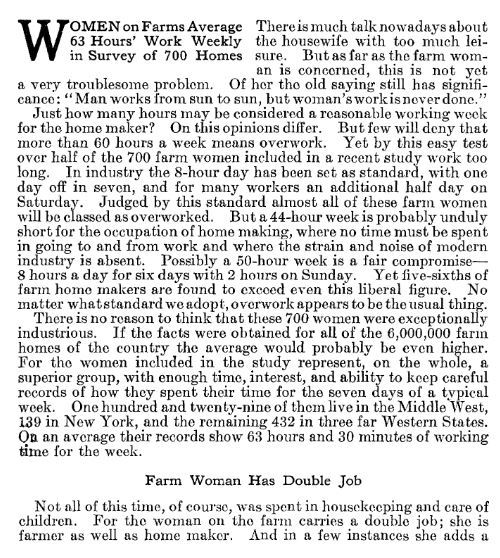 "There is much talk nowadays about the housewife with too much leisure. But as far as the farm woman is concerned, this is not yet a very troublesome problem. Of her the old saying still has significance: 'Man works from sun to sun, but woman's work is never done.'" 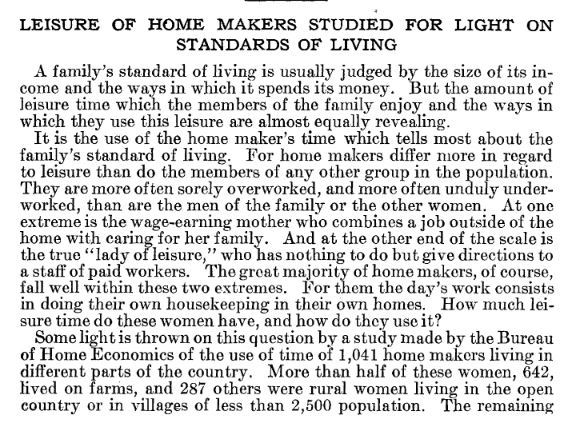