The U.S. Department of Agriculture created many publications that described the essential issues and requirements for different forms of crop development.

Here is a small sample of historical USDA documents that addressed issues of growing and developing peanuts for the small farmer, created around the time of Carver's bulletins. 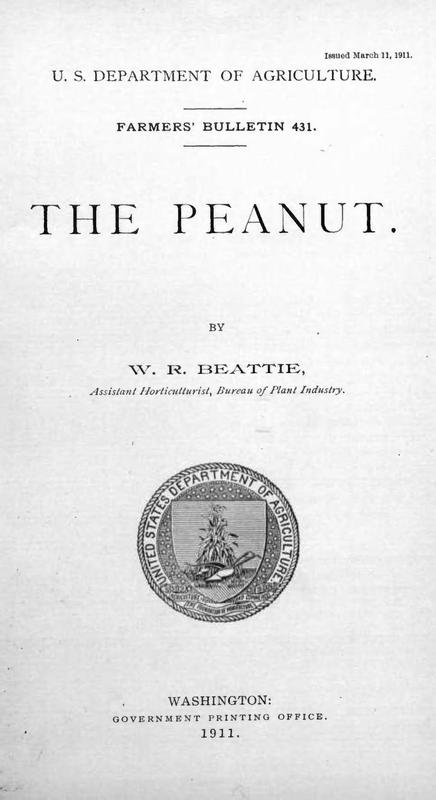 "It is not definitely known when and where the peanut was first cultivated. Several allied species of plants are natives of Brazil, and there is every indication that the common peanut originally came from tropical America. Peanuts were introduced into the United States during the earlier days of colonization, but did not become of commercial importance until about 1870. From that time until 1897 the growth of the peanut industry was gradual, but a great increase in the production and use of peanuts has taken place during the last eight or ten years. Botanieally the peanut belongs to the same group of plants as do the beans and peas, but it possesses' the character of maturing its fruit or nut beneath the surface of the soil rather than above ground, as do most other leguminous plants. The technical name of the peanut is Arachis Tiypogea, the name indicating the characteristic habit of the plant to mature its fruits underground. The peanut is known under the local names of 'goober,' 'goober pea,' 'pindar,' 'ground pea,' and 'groundnut.' The names 'goober' and 'goober pea' are more properly applied to an allied species having no true stem and only one pea in each pod which has been introduced and is frequently found growing wild in the Gulf Coast States. Properly speaking, the peanut is a pea rather than a nut, the term 'nut' having been added on account of its flavor, which is similar to that of many of the true nuts. The small yellow flowers of the peanut are borne in the little pocket where the leaves are attached to the stems, and as soon as pollination has taken place the visible portion of the flower fades and falls, after which the short, thick stem that supports the lower portion of the flower elongates and the sharp-pointed ovary is thrust downward into the soil, where the pod develops. Should the ovary fail to reach or penetrate the soil no pod will be formed. The value of the commercial peanut crop of the United States for the year 1908 was estimated at $12,000,000." 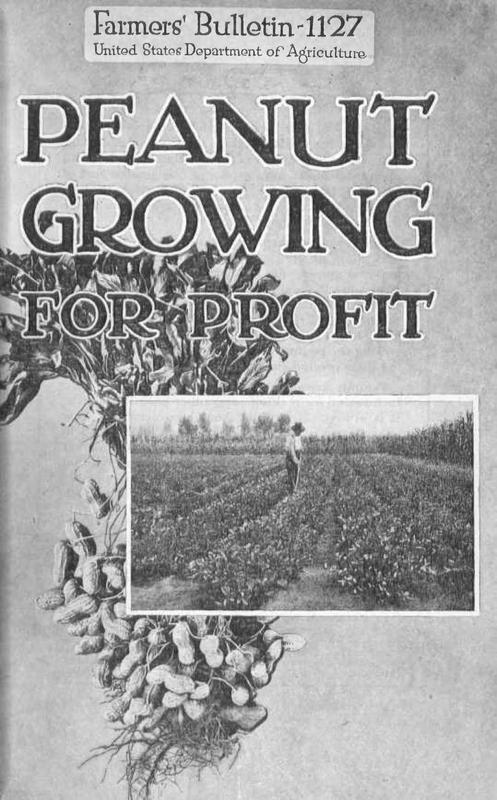 "Peanuts have become one of the best money crops for use in rotation with cotton and other farm crops in the fight against the boll weevil. Until recently peanuts were grown in the greater part of the Gulf coast region primarily for stock feeding, but now they are of commercial importance in no less than 12 Southern States.

Good seed, proper preparation of the soil, frequent cultivation of the crop, proper harvesting and curing, and grading the product according to standard grades are the main essentials to the realization of a profit from peanuts. Most failures have been due to the neglect of one or more of the above essentials. Many losses have resulted from the practice of wind-rowing the peanut vines for curing instead of stacking them around small poles.

Peanuts are in increasing demand for oil manufacture and for making many other peanut products. It is always safe for the Southern farmer to grow peanuts, as every part of the crop can be used to advantage for feeding on the farm in case the market does not justify their sale. A closer working relation between growers and dealers is desirable, and the establishment of standard grades will do much toward stabilizing the industry." 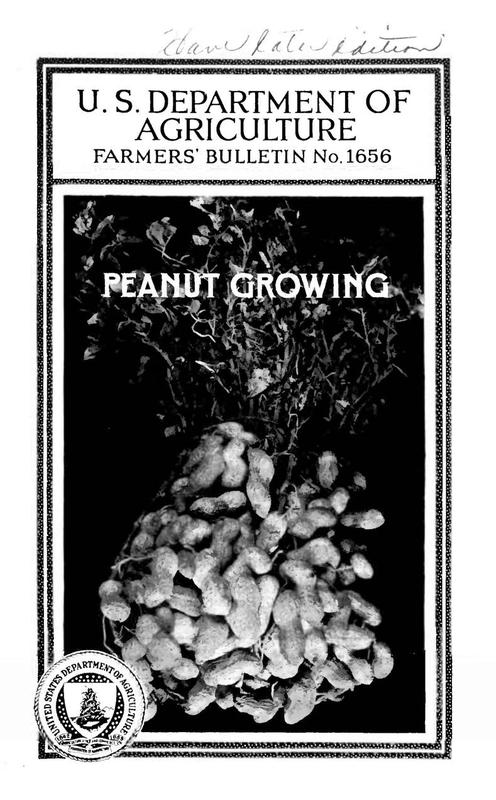 "Peanuts are an important farm crop throughout the greater part of the Southeastern States. The peanut is a native of the Tropics and was introduced into North America during the early colonization period, but its use has increased very greatly during recent years. Peanuts should be grown in a definite rotation, including at least two soil-improvement crops, such as cowpeas, velvetbeans, soybeans, bur clover, crimson clover, vetch, or any crop that will add organic matter to the soil. Peanuts should not be planted on the same land oftener than once in three or four years. Experimental results show that the kind and quantity of commercial fertilizer that may be profitably used for peanuts depend almost entirely on the fertility and character of the soil. Tests in Virginia have shown that large quantities of nitrogen used on a fairly fertile soil always produce a poor quality of peanuts without materially increasing the yield. On thin, sandy soils and those not in a good state of fertility 300 to 500 pounds per acre of a complete fertilizer may, as a rule, be used to advantage. Results obtained from the use of lime on peanuts by various investigators indicate that the quality of the peanuts is affected much more than the quantity. Peanuts grown on soils containing the proper amount of lime are usually better filled, the shells are whiter, and they have greater weight per bushel. Good seed is the foundation of a profitable crop of peanuts. The size of the peanut kernels depends largely on inherent qualities and not upon occasional large seeds. This bulletin is a revision of and supersedes Farmers' Bulletin 1127, Peanut Growing for Profit." 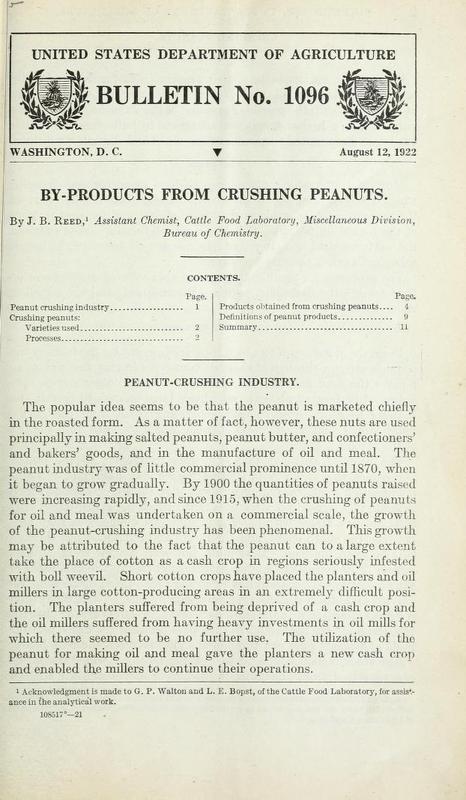 "The popular idea seems to be that the peanut is marketed chiefly in the roasted form. As a matter of fact, however, these nuts are used principally in making salted peanuts, peanut butter, and confectioners' and bakers' goods, and in the manufacture of oil and meal. The peanut industry was of little commercial prominence until 1870, when it began to grow gradually. By 1900 the quantities of peanuts raised were increasing rapidly, and since 1915, when the crushing of peanuts for oil and meal was undertaken on a commercial scale, the growth of the peanut-crushing industry has been phenomenal. This growth may be attributed to the fact that the peanut can to a large extent take the place of cotton as a cash crop in regions seriously infested with boll weevil. Short cotton crops have placed the planters and oil millers in large cotton-producing areas in an extremely difficult position. The planters suffered from being deprived of a cash crop and the oil millers suffered from having heavy investments in oil mills for which there seemed to be no further use. The utilization of the peanut for making oil and meal gave the planters a new cash crop and enabled the millers to continue their operations.

The Spanish variety is the one grown principally for the production of oil. The meats of this variety have a higher oil content than those of any other, with the possible exception of the Valencia, or Tennessee red. It has a higher proportion of meats to hulls than any other variety and is adapted to a wider range of soil and climatic conditions." 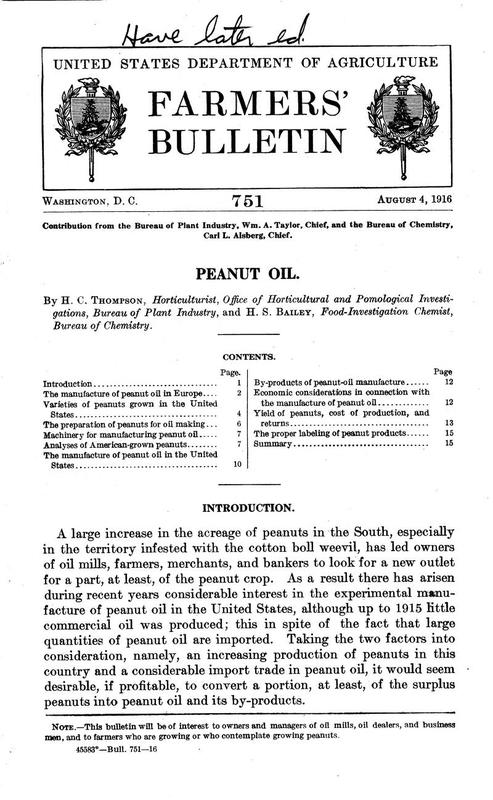 "A large increase in the acreage of peanuts in the South, especially in the territory infested with the cotton boll weevil, has led owners of oil mills, farmers, merchants, and bankers to look for a new outlet for a part, at least, of the peanut crop. As a result there has arisen during recent years considerable interest in the experimental manufacture of peanut oil in the United States, although up to 1915 little commercial oil was produced; this in spite of the fact that large quantities of peanut oil are imported. Taking the two factors into consideration, namely, an increasing production of peanuts in this country and a considerable import trade in peanut oil, it would seem desirable, if profitable, to convert a portion, at least, of the surplus peanuts into peanut oil and its by-products.

Peanut oil is one of the most important of the world's food oils, as is evidenced by the fact that in 1912 over 120,000 metric tons of peanuts in the shell, together with about 240,000 metric tons of shelled nuts, were crushed in Marseille, yielding 15,500,000 gallons of edible oil. In addition to this, about 23,000,000 gallons of inedible peanut oil were produced. The same year, Germany imported 68,765 tons of peanuts, practically all of which were used for making oil.

The imports of peanut oil entered for consumption in the United States for the year ended June 30, 1914, amounted to 1,332,108 gallons, valued at $915,939. Almost exactly one-half of this oil was imported through the port of Chicago, which would indicate that a large portion of it was used in the manufacture of oleomargarine." 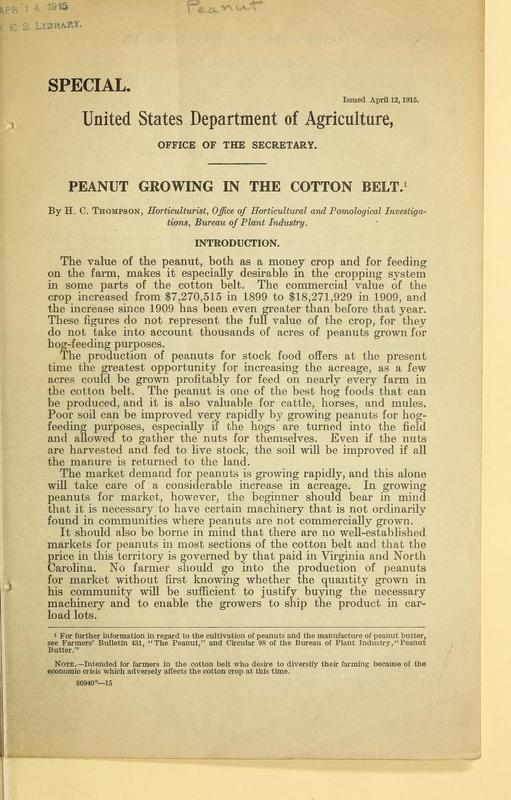 Peanut Growing in the Cotton Belt (1915)

"The value of the peanut, both as a money crop and for feeding on the farm, makes it especially desirable in the cropping system in some parts of the cotton belt. The commercial value of the crop increased from $7,270,515 in 1899 to $18,271,929 in 1909, and the increase since 1909 has been even greater than before that year. These figures do not represent the full value of the crop, for they do not take into account thousands of acres of peanuts grown for hog-feeding purposes.

The production of peanuts for stock food offers at the present time the greatest opportunity for increasing the acreage, as a few acres could be grown profitably for feed on nearly every farm in the cotton belt. The peanut is one of the best hog foods that can be produced, and it is also valuable for cattle, horses, and mules. Poor soil can be improved very rapidly by growing peanuts for hog-feeding purposes, especially if the hogs are turned into the field and allowed to gather the nuts for themselves. Even if the nuts are harvested and fed to live stock, the soil will be improved if all the manure is returned to the land.

The market demand for peanuts is growing rapidly, and this alone will take care of a considerable increase in acreage. In growing peanuts for market, however, the beginner should bear in mind that it is necessary to have certain machinery that is not ordinarily found in communities where peanuts are not commercially grown.

It should also be borne in mind that there are no well-established markets for peanuts in most sections of the cotton belt and that the price in this territory is governed by that paid in Virginia and North Carolina. No farmer should go into the production of peanuts for market without first knowing whether the quantity grown in his community will be sufficient to justify buying the necessary machinery and to enable the growers to ship the product in carload lots."