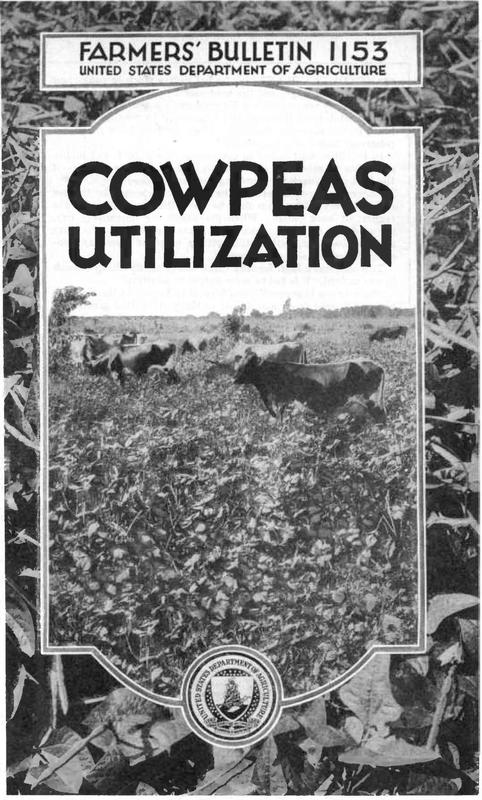 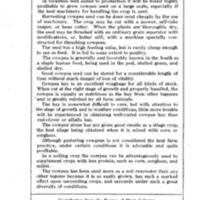 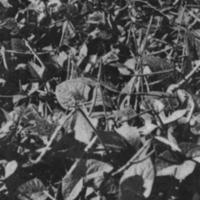 THE COWPEA PLANT may be fed to live stock as pasturage, hay, or ensilage, and the seed may be used as human food. Cowpeas are not grown for seed more generally because of the uncertainty of the crop, the expense of harvesting, and the low yield commonly obtained. These factors have created a relatively high price for the seed.

In localities well suited to production it will be found highly profitable to grow cowpea seed on a large scale, especially if the best machinery for handling the crop is used.

Harvesting cowpea seed can be done most cheaply by the use of machinery. The crop may be cut with a mower, self-rake reaper, or bean cutter. When the plants are 'thoroughly dry, the seed may be thrashed with an ordinary grain separator with modifications, or, better still, with a machine specially constructed for thrashing cowpeas.

The seed has a high feeding value, but is rarely cheap enough to use as feed. It is fed to some extent to poultry.

The cowpea is generally and favorably known in the South as a staple human food, being used in the pod, shelled green, and shelled dry.

Good cowpea seed can be stored for a considerable length of time without much danger of loss of vitality.

Cowpea hay is an excellent roughage for all kinds of stock. When cut at the right stage of growth and properly handled, the cowpea is equally as nutritious as the hay from other legumes and is greatly relished by all farm animals.

The hay is somewhat difficult to cure, but with attention to the stage of growth and to weather conditions, little more trouble will be experienced in obtaining well-cured cowpea hay than red-clover or alfalfa hay.

The cowpea alone has not given good results as a silage crop, the best silage being obtained when it is mixed with corn or sorghum.

Although pasturing cowpeas is not considered the best farm practice, under certain conditions it is advisable and quite profitable.

As a soiling crop the cowpea can be advantageously used to supplement crops with less protein, such as corn, sorghum, and millet.

The cowpea has been used more as a soil renovator than any other legume because it is so easily grown, has such a marked effect upon succeeding crops, and succeeds under such a great diversity of conditions.