Booker T. Washington did not bring George Washington Carver to Alabama merely to teach the hundreds of students who attended Tuskegee Institute each year. Rather, Washington expected Carver also to instruct the larger black community of Macon County, the state of Alabama, even the entire African American South.

The vast majority of black Southerners were mired in a culture of economic dependency on whites in the 1890s. Most blacks made their living as sharecroppers and tenant farmers, working for whites who continued to try to make a living off of growing the South’s still-dominant cash crop, King Cotton. Indeed, according to historian R. Douglas Hurt, even as last as 1900, four years after Carver’s arrival at Tuskegee, ‘tenancy in the South bound most of the 707,364 black farmers to the land…[A]bout 75 percent of all black farmers were tenants, usually sharecroppers. With more than half a million black farmers captive to the trinity of cotton, tenancy, and poverty, they were a desperate people with little hope.’

Carver wrote one bulletin specifically designed to help these poor farmers grow and market their cotton crop: How to Make Cotton Growing Pay (1908). The U.S. Department of Agriculture published many materials on cotton farming at the time of Carver's work at Tuskegee; this section of the exhibit includes a sample of these documents. 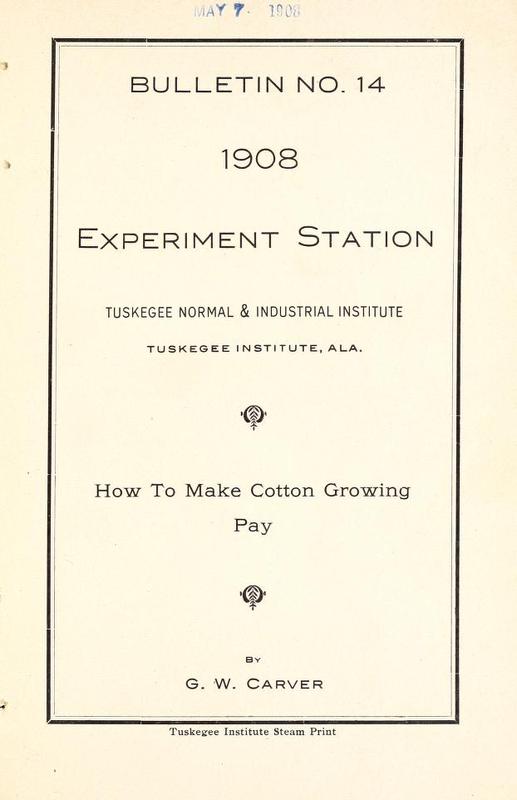 "Two years of cotton experimentation have come and gone since the issue of Bulletin 7 of this station, on Cotton Growing on Sandy Upland Soils; in that bulletin we took the position that every acre in Alabama capable of growing cotton , could and should be made to produce a bale of cotton to the acre.

The bulletin further shows that the above position was correct as it not only produced a 500-pound bale but 20 pounds in excess.

The years of 1906 and 1907 were such trying ones, and the output of cotton so satisfactory that we feel that it will be of special interest to every farmer to know just how it was done. Since the same laws which govern the successful production of cotton apply with equal force to other field and garden crops, we call attention to the following things of importance:

PREPARATION OF THE SOIL

In this it is safe to say that fully two-thirds of our farmers fail, they fail first, because they do not turn (broadcast) their land in the fall just as soon as the crop is off. Second, they do not plow deep enough." 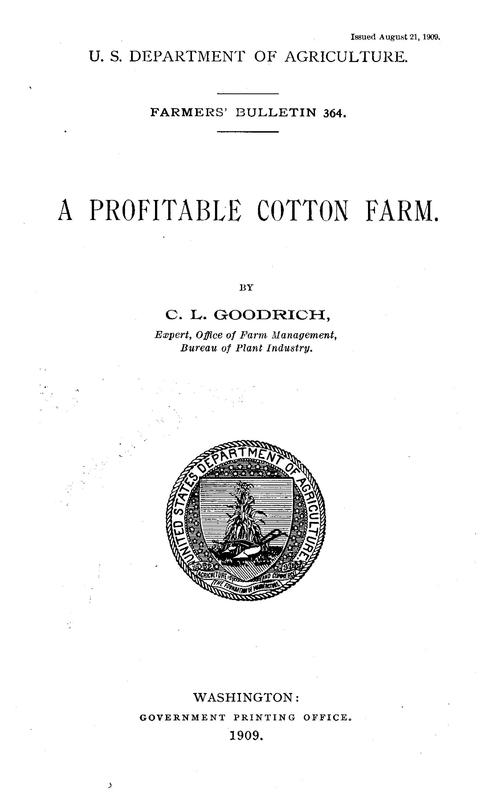 This bulletin is an account of the progressive and successful farm operations of a farmer of South Carolina who, by combining thorough tillage, crop rotation, barnyard manure, and a judicious use of commercial fertilizer, has changed a previously badly managed and run-down cotton farm into a very productive and profitable enterprise. The impulse prompting the writing of this bulletin is the belief that it may suggest to other farmers of the South ways and means by which they may so improve their methods of management as to make their farms more profitable.

DESCRIPTION OF THE COTTON FARM.

"The farm described is located in the east-central part of South Carolina. It lies on a low, sandy ridge having good drainage, the land sloping in all directions from the central ridge like a turtle's back. The soil is a gray sandy loam, in some parts quite loose and almost white in color. It is underlain at a depth of 12 to 15 inches by a yellow sandy subsoil. The forest growth is pine and scrub oak. There are 131| acres in the farm, of which 66 acres are under a system of rotation and 30 are occupied by tenant houses and their surrounding lots. The remainder is woodland. The farm has been under cultivation some eighty years, and for the eight or ten years previous to the present ownership had been rented.

Figure 1 gives some idea of the condition of the farm when the present owner took possession in January, 1902. Several tenant houses were scattered promiscuously over it, a number of bad gullies had been allowed to develop, a swamp hole occupied part of one field, and clumps of scrubby trees, bushes, and broom sedge had grown up, making the fields irregular in shape and giving the farm a rough and unthrifty appearance. The fertility of the soil had been reduced to the low ebb of producing 300 pounds of seed cotton and 5 to 8 bushels of corn to the acre.

Now this is all changed; the borders of the fields have been straightened, the tenant houses moved from the tillable lands, gullies filled up, and the swamp hole drained. The tillable land has been divided into three fields, of 22 acres each; the farm has been fenced; and a new house, barn, and other buildings have been erected. The farm to-day presents an appearance of neatness, thrift, and prosperity." 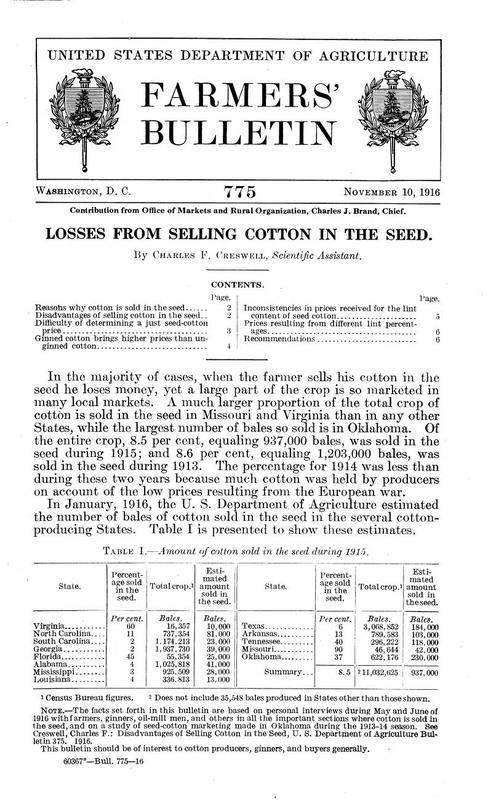 Losses From Selling Cotton in the Seed (1916)

In January, 1916, the U. S. Department of Agriculture estimated the number of bales of cotton sold in the seed in the several cotton-producing States." 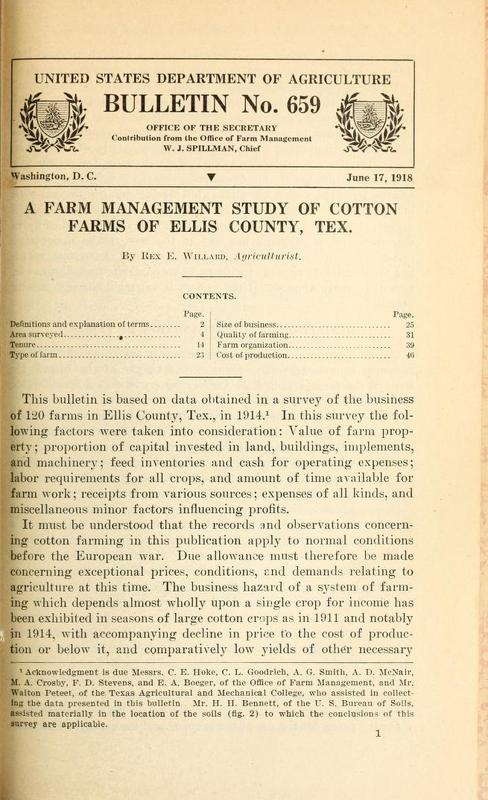 "This bulletin is based on data obtained in a survey of the business of 120 farms in Ellis County, Tex., in 1914. In this survey the following factors were taken into consideration: Value of farm property; proportion of capital invested in land, buildings, implements, and machinery; feed inventories and cash for operating expenses; labor requirements for all crops, and amount of time available for farm work; receipts from various sources; expenses of all kinds, and miscellaneous minor factors influencing profits.

It must be understood that the records and observations concerning cotton farming in this publication apply to normal conditions before the European war. Due allowance must therefore be made concerning exceptional prices, conditions, end demands relating to agriculture at this time. The business hazard of a system of farming which depends almost wholly upon a single crop for income has been exhibited in seasons of large cotton crops as in 1911 and notably in 1914, with accompanying decline in price to the cost of production or below it, and comparatively low yields of other necessary crops "which the farmer was compelled to buy at high prices. Be- sides, a system of one-crop farming as herein described exhausts soil fertility, and in the case of cotton it provides no means for employment of the farmer's time during a considerable part of the year. Incidentally, dependence upon cotton as a sole source of income with which to purchase the ordinary family and farm needs often results in denying the family a sufficient variety of wholesome food. During a considerable period of good prices for cotton this system is profitable if one considers profit to consist only of the returns from the year's operations; but during another period, with low prices prevailing, such a system would be disastrous. This survey, therefore, is to be taken as an analysis of the kind of farm described and as pointing the way to the, best results under that system. It is not to be taken as an endorsement of the system, which has many evils, as appears incidentally throughout the bulletin, and as will be more apparent if the system is extended through a long period."