Carver['s'] abiding concern was ending the widespread malnutrition of southern sharecroppers by showing them how to raise and cook healthful food. During the five years after 1900, Carver developed recipes for the foods that he knew were both nourishing and easy to grow in Alabama: sweet potatoes, cowpeas, and peanuts. It is commonplace now to think of peas, beans, and nuts as worthy vegetarian sources of protein; but in the early 1900s, the word 'protein' was not part of the normal vocabulary, and vitamin research was still in its infancy. Carver's recognition of the dietary value of these foods was remarkable.

While Carver included recipes at the end of almost every Bulletin, six publications used the preparation of farm products for the farm family itself as the central topic. 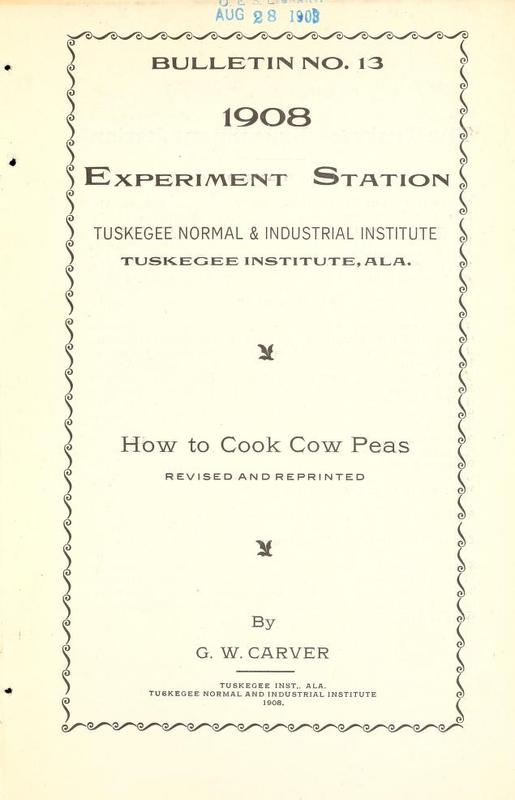 "We take pleasure in submitting below thirty-two recipes which have been carefully tested as to their value, and I am sure will be found helpful in the preparation of this delicious vegetable:

Wash the desired quantity of peas to be cooked in cold water, put in iron pot or stew-pan, cover with cold water, drop in a piece of fat bacon, boil slowly until tender; season with pepper and salt, if the bacon is not sufficiently salty to supply the required amount of salt; then simmer slowly until ready to serve. A small piece of butter will add greatly to their flavor.

Prepare the same as for boiling; when half done pour into the baking pan, season with butter, pepper, and to every pint of peas, add one scant teaspoonful of salt, and a pinch of sugar; scar the piece of bacon and half bury it in the middle of the dish, cook slowly until thoroughly done and a delicate brown; serve either hot or cold.

Soak one pint of peas in cold water over night or until the hulls rub off easily, free them from the skins by rubbing them between the hands; continue washing in cold water until all of the skins are removed; put in vessel to cook (porcelain or granite stew-pan preferable), with just enough water to cover them, boil slowly." 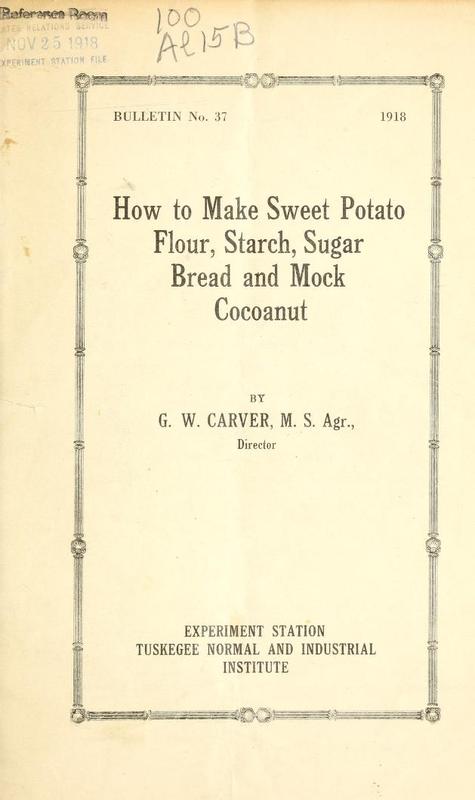 Two and ¾ cups flour, or sufficient to make a soft dough.

Add the salt to the potatoes, and the yeast; pour in the water; add flour enough to make a smooth sponge (about a cupful); cover, and set in a warm place to rise.

When light add the remainder of the flour or whatever is needed to make a smooth, elastic dough. Cover, and let rise until light; mold shape into loaves or rolls; let rise and bake.

Many variations of the above bread can be made by adding sugar, butter, lard, nuts, spices, etc." 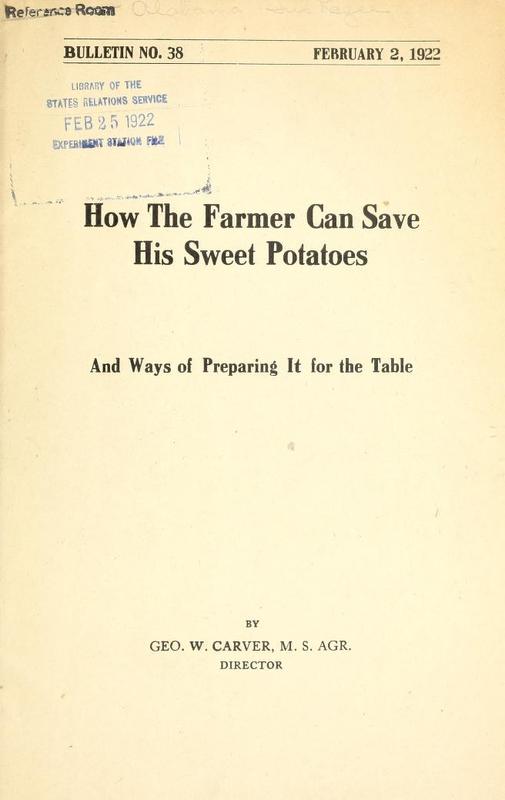 "As a food for human consumption, the sweet potato has been, and always will be, held in very high esteem, and its popularity will increase as we learn more about its many possibilities.

There is an idea prevalent that anybody can cook sweet potatoes. This is a very great mistake, and the many, many dishes of [sic] illy cooked potatoes that are placed before me as I travel over the South, prompt me to believe that these recipes will be of value (many of which I have copied verbatim from Bulletin No. 129 U. S. Department of Agriculture). The above bulletin so aptly adds the following:

‘The delicate flavor of a sweet potato is lost if it is not cooked properly. Steaming develops and preserves the flavor better than boiling, and baking better than steaming. A sweet potato cooked quickly is not well cooked. Time is an essential element. Twenty minutes may serve to bake a sweet potato so that a hungry man can eat it, but if the flavor is an object, it should be kept in the oven an hour.'" 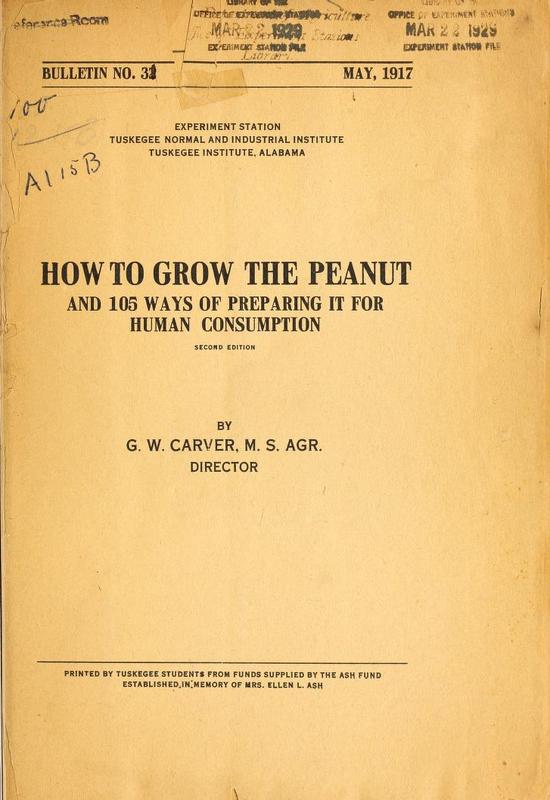 How to Grow the Peanut: And 105 Ways of Preparing It for Human Consumption (1917)

"AS A FOOD FOR MAN

By reason of its superior food value the peanut has become almost a universal diet for man, and when we learn its real value, I think I am perfectly safe in the assertion that it will not only become a prime essential in every well-balanced dietary, but a real necessity. Indeed, I do not know of any one vegetable that has such a wide range of food possibilities.

Below are given 105 ways of preparing the peanut for human consumption, with the hope that every farmer will learn to appreciate them and raise large quantities for his own consumption; and also with the hope that the city folk will find the diet not only wholesome, satisfying, healthful and appetizing, but very economical. Fourteen recipes were selected from this number, and a five course luncheon served to ten food specialists; and each one without exception was enthusiastic over it, and said it was the most satisfying luncheon he or she had ever eaten." 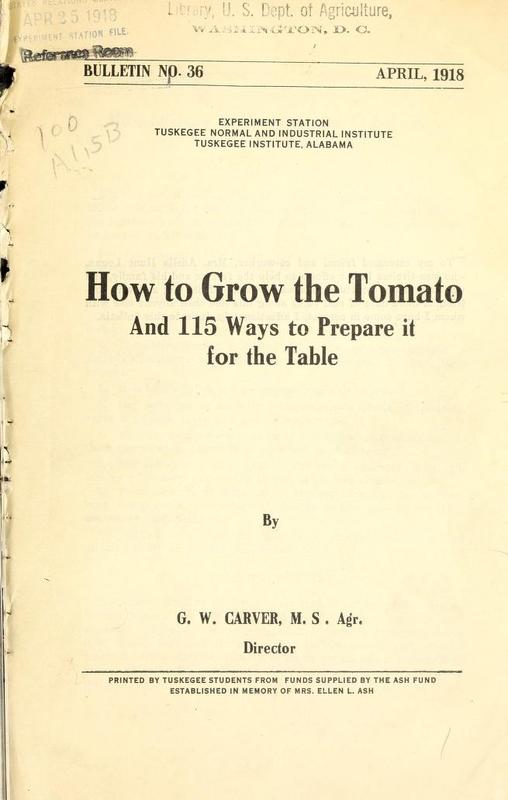 "As before stated there are but few garden vegetables from which such a large number of attractive, wholesome, and nutritious dishes can be made, and it is hoped that the large number of recipes given below will encourage the housewife to serve this choice vegetable many times during the week, and each time the consumer consider it a luxury.

Macaroni and Tomatoes, No. 1

Cook the required amount of macaroni in plain water to which a little salt has been added; cook till soft; cut a small piece of salt pork into little pieces; one small onion sliced; put into a frying pan and brown. Drain the water off the macaroni; pour into the frying pan; add enough tomato paste to season well; add pepper and a bit of cheese if desired.

Macaroni and Tomatoes, No. 2

Use either macaroni or spaghetti; prepare the sauce as for No. 1; season to taste with salt, pepper and butter; make rich with tomatoes (either fresh or canned) cooked to a pulp; put the mixture, layer by layer, into a baking dish, grating a thin layer of cheese over each layer, covering the cheese with buttered bread crumbs; return to the oven and bake 25 minutes." 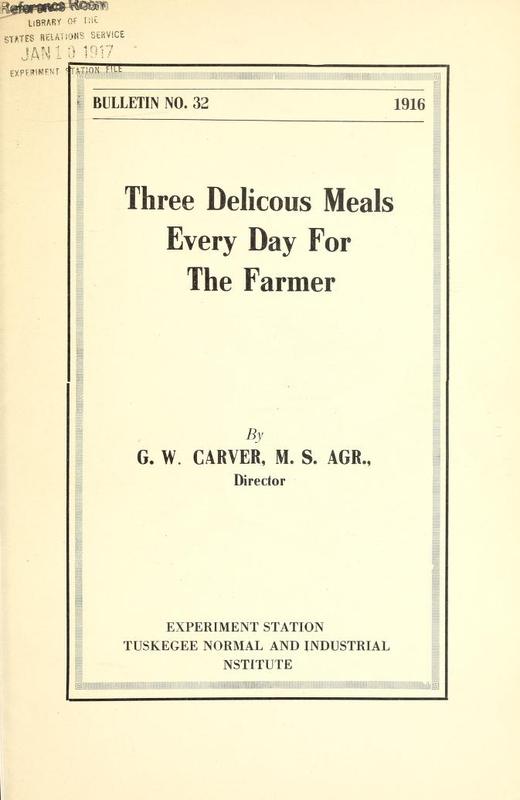 Three Delicous [sic] Meals Every Day for the Farmer (1916)

As a rule, we are wasteful; we do not know how to save. Ignorance in the kitchen is one of the worst curses that ever afflicted humanity, and is directly or indirectly responsible for more deaths than all the armies combined. It sacrifices human life from the following angles:

1. A poor selection of food; that is, foodstuff lacking in the constituents necessary to build up the body and keep it healthy.

2. Bad combinations of food; that is, there are many foodstuffs good within themselves, but when combined with other material create an unnatural appetite; and quite frequently the body is unnourished, unduly stimulated, and as a result often leads to strong drink, bad morals, and bad manners.

3. Bad preparation of food. In this I think I make a conservative statement when I say that 75 per cent of those who are entrusted with this important charge are deficient. Here is the very hot-bed for indigestion, constipation, sour stomach, malnutrition, colic, and a host of other stomach troubles."