Frost and the Apples of New Hampshire

One of my apple trees, standing stock still and rooted, earns more money in a year than I can earn with all my locomotion and artistic detachment. The moral seems to be that I must write more and better poetry if I hope to compete in the market with things to eat

The farm in Derry was large enough to support agricultural pursuits aside from chickens. Parini (2007) describes the property as containing a cranberry bog, raspberry and blackberry patches, a vegetable patch, and peach, pear, and quince trees.

Apples played an even larger part in the Frost farm adventure. "The apple orchard on the north side of the house was ripe for picking: Northern Spies, Gravensteins, Baldwins, and other varieties would soon be ready for market [at the time that Frost took ownership of the property]" (Parini, p. 71). 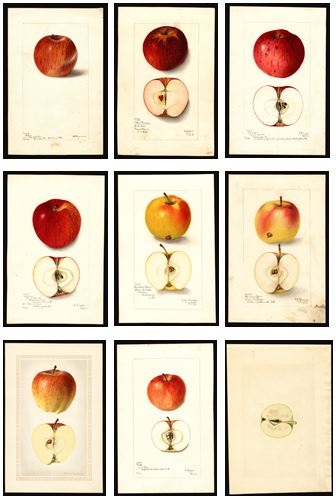 At the same time that Frost was starting his own farm, including its apple trees, the USDA was sending artists out to the field (including Derry, New Hampshire) to visually document different varieties of fruits. Nine varieties of New Hampshire apples were documented and are available for view.

These images are part of The National Agricultural Library's digital collection: The USDA Pomological Watercolor Collection. In 1886, the United States Department of Agriculture (USDA) established the Division of Pomology to oversee the collection and distribution of new varieties of fruits, and to disseminate information to fruit growers and breeders. USDA commissioned artists to create technically accurate illustrations of newly introduced cultivars for the division's publications.

The USDA Pomological Watercolor Collection contains reproductions of 7,497 watercolor paintings -- over half of these are of apples.