Charlemagne Bricault's decision to leave his Massachusetts farm in 1905 played a large role in Frost's increased desire to exit the poultry business (Sauders, 2011). Bricault had effectively subsidized Frost for his entire poultry career through the inflated prices Bricault paid for Frost's eggs.

Frost used teaching as his way out. He had assisted his mother as a teacher in her private school before Harvard, the farm in Metheun, and then Derry. With this plan in mind, Frost approached a trustee of the local Pinkerton Academy: a private high school located in Derry just two miles away from the farm. The trustee, Charles Loveland Merriam, was the pastor of Derry's Central Congregationalist Church. His New Year's postcard greeting for 1906 can be seen below. 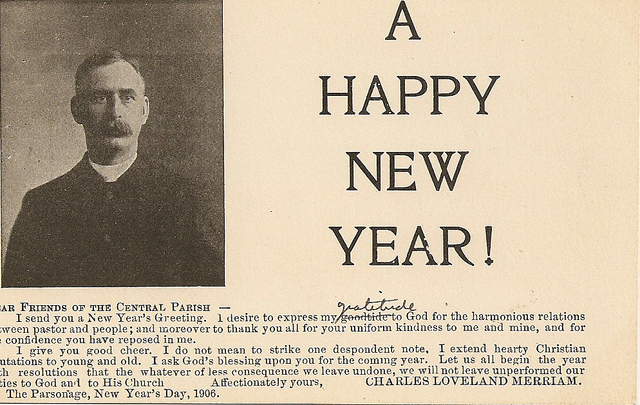 Merriam thought Frost would be a fine candidate for Pinkerton and invited him to meet other trustees at a banquet of the Church's Men's League. He also asked Frost to read a poem as a further way of bringing him together with this group, but Frost had a bout of stage fright and declined. After Merriam read the poem himself, the local paper published it the next day, March 9, 1906. After "The Tuft of Flowers," was seen in the Derry Sentinel, Frost was given a job in Pinkerton to teach Sophomore English. (Although the poem was formally published in 1915's A Boy's Will, Frost wrote it back in 1897.)