Overview of Genetic Selection and Welfare in Hens 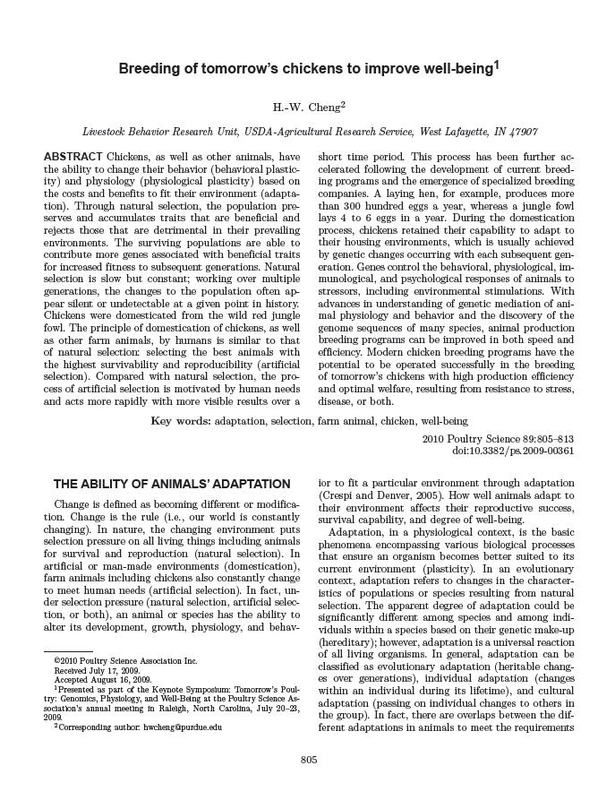 Dr. Heng Wei Cheng, Research Biologist of the USDA's Livestock Behavior Research Unit and author of the study "Breeding of Tomorrow's Chickens to Improve Well-Being" gives an overview of genetic selection and welfare considerations for chickens, especially those raised for egg production. It is quoted below; original full text is here.

Cannibalism and aggression are among the major stressors in poultry that cause suffering and death of chickens. Beak trimming, removal of 1/3 to ½ of the beak, is a routine hus bandry procedure practiced in the poultry industry, including laying hens, broiler breeders, turkey and ducks, to prevent those undesirable behaviors. However, beak trimming is a painful procedure. There is a considerable body of morphological, neurophysiological, behavioral and production research demonstrating the emergence of several markers of acute and chronic pain (e.g., persistent lethargy and guarding behaviors, reduced feed intake, and development of neuromas) as a result of beak trimming. The most desirable approach to control cannibalism and to eliminate beak trimming is through genetic selection, i.e., selecting chickens with less aggressive behavior and non-cannibalism.

Solution of Aggression and Cannibalism:

Chickens were domesticated from the wild Red Jungle Fowl. The principle of domestication of chickens, as well as other farm animals, by humans is similar to that of natural selection: selecting the best animals with the highest survivability and reproducibility on farm (artificial selection). Compared to natural selection, the process of artificial selection is motivated by human needs and acts more rapidly, with more visible results over a short time period. This process has been further accelerated following the development of current breeding programs and the emergence of specialized breeding companies. A laying hen, for example, produces more than 300 hundred eggs a year, whereas a jungle fowl lays 4-6 eggs in a year. During the domestication process, chickens retained their capability to adapt to their housing environments, which is usually achieved by genetic changes occurring with each subsequent generation.

Breeding of chickens to improve welfare requires enhancing the animals’ adaptability to their surrounding environment. Animal adaptation is a complex interaction between genes and the social environment. Social interactions can substantially increase heritable variance in trait values. In laying hens, for example, social effects contribute to approximately half of the heritable variance in mortality due to cannibalism. Functional integrations between behavior, physiology, and morphology may create suites of traits in animals that are simultaneously acted upon by selection. Based on those findings, a selection program, named group selection, has been developed. In group selection, effort is focused on assessing how individuals survive and reproduce in a group.

The advancement of the program is that it allows selection on production traits but takes into account competitive interactions in a group setting. The program focuses on genes, environment, and genetic-environmental inter-actions, by which it turns “survival of the fit-test” with emphasis on individuals, to “survival of the adequate” with emphasis on the group, overcoming antisocial behaviors. In previous studies, a synthetic line of White Leghorns was used in the selection program. During the selection each sire family was housed as a group in a multiple-hen cage and selected or rejected as a group based on production performance and longevity. Hens were not beak-trimmed and lights were maintained at high intensity to allow expression of all behaviors, including aggression.

Through this selection program, two divergent chicken lines were developed; a line of non-aggressive/non-canabalistic hens with high group productivity and survivability (HGPS) and a line of reverse selected hens with low group productivity and survivability (LGPS). The use of these two diversely selected lines as animal models has shown that selection for high and low group productivity and longevity affected the functions of hormones and expression of behavior. These changes are likely associated with each line’s unique adaptation when confronted with a novel environment and a greater resistance to various stressors.

Genetic selection is a useful tool for improving animal health and welfare. Studies have shown that productivity can be increased while, at the same time, well-being improved. This approach has been verified in poultry breeding applications and has resulted in dramatic improvements in survivability, productivity, and welfare.

Genes control animals’ behavioral, physiological, immunological, and psychological responses to stressors, including environmental stimulations. With advances in understanding of genetic mediation of animal physiology and behavior and the discovery of many species’ genome sequences, animal breeding programs can be improved in both speed and efficiency. Modern chicken breeding programs have the potential to be operated successfully in the breeding of tomorrow’s chickens with high production efficiency and optimal welfare, resulting from resistance to stress and disease.