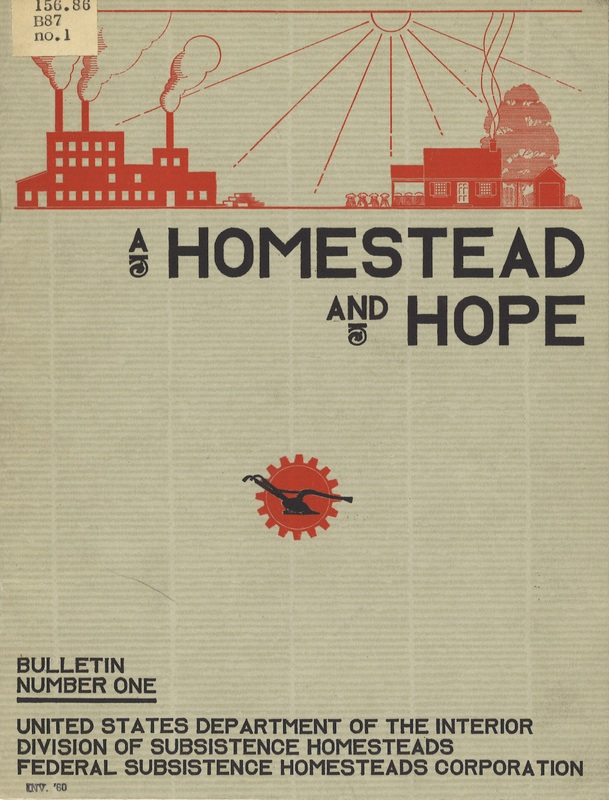 "A SUBSISTENCE HOMESTEAD consists of a modern but inexpensive house and outbuildings, located on a plot of land upon which a family may produce a considerable portion of the food required for home consumption.

THE DIVISION of Subsistence Homesteads is engaged in developing communities composed of from twenty-five to two or three hundred of such individual homesteads. The homesteads, when completed, are sold on liberal terms to families with annual incomes of less than $1,200. A 30-year purchase period is provided. The sales price of the average homestead is approximately $3,000. The Division's purchase plan enables a family to buy such a $3,000 homestead by making payments of $12.65 a month.

SINCE production of garden and farm commodities is for family use and not for commercial sale, it follows that a homesteader must have a small but reasonably assured cash income, or at least reasonably certain prospects of an income, once he is settled on his homestead. The homesteader’s cash income normally is derived from wage employment of some type. In a large proportion of cases this employment is of a part-time or seasonal nature.

THE SUBSISTENCE HOMESTEADS program assists an intermediate group. It accommodates persons who, on the one hand, are above the sheer relief level, but who, on the other hand, lack the savings and the income to enable them to obtain financing from private sources. Thus the subsistence homesteads program does not burden with further debt or tie down to a fixed locality persons who must seek employment actively, and neither does it compete with private enterprise in the financing of the more fortunate." 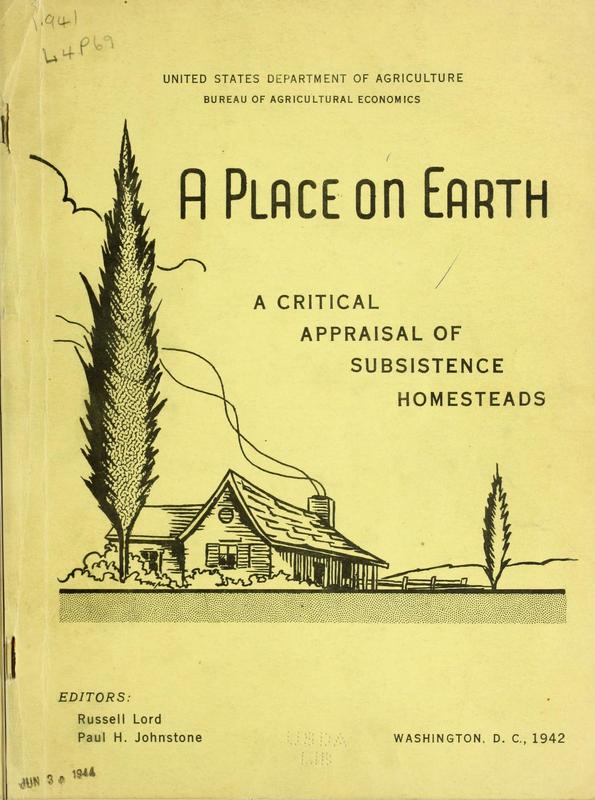 A Place on Earth: A Critical Appraisal of Subsistence Homesteads (1942).

This report has three main parts. Part I gives a historical account of the movements and forces that resulted in a federally sponsored subsistence-homesteads program, and contains information concerning the events and developments that have influenced the program on the national level. Part II gets down to specific cases. Each chapter tells the story of a particular project -how it began, what it was intended to be, and how it has worked out. Part III attempts to summarize, so far as possible, the lessons about subsistence homesteads that were learned in the course of gathering information for part II.

The study was requested by the Farm Security Administration in 1939. The original purpose was to procure information that would be valuable in the administration of subsistence-homesteads projects. Stated briefly, the Farm Security Administration wanted to know what things had worked, what things had not worked, and, if possible, what social, psychological, and economic factors were responsible for certain developments in the projects that were not easily or superficially explainable.

This report deals specifically with only nine out of a great many subsistence-homesteads communities that were established under Federal sponsorship during the first years after 1933." 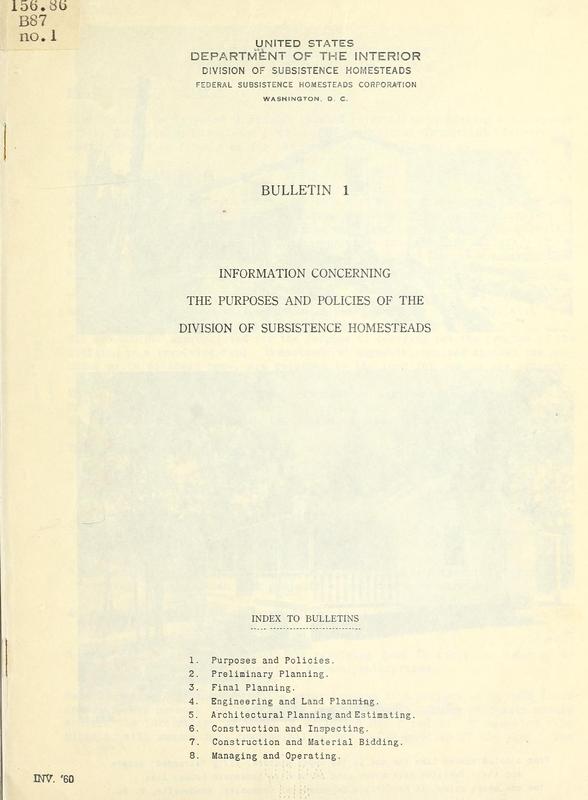 Information Concerning the Purposes and Policies of the Division of Subsistence Homesteads (1933).

U.S. Department of the Interior -

"This bulletin is intended to provide general information concerning the purposes of the Subsistence Homesteads section of the National Industrial Recovery Act and the policies formulated for the administration thereof.

The text of the National Industrial Recovery Act, Section 208, and the executive and departmental orders will be found on pages 9 and 10 of this bulletin.

The $25,000,000 appropriated for the purpose of carrying out the program of the Division is a revolving fund. Homesteaders' payments, applied against the purchase price of their home, are returned to the fund for use in new projects.

The part of the Federal Government is that of experimenter and demonstrator. Projects are selected with a view to testing varying sets of conditions found in the several parts of the United States and among different types of people." 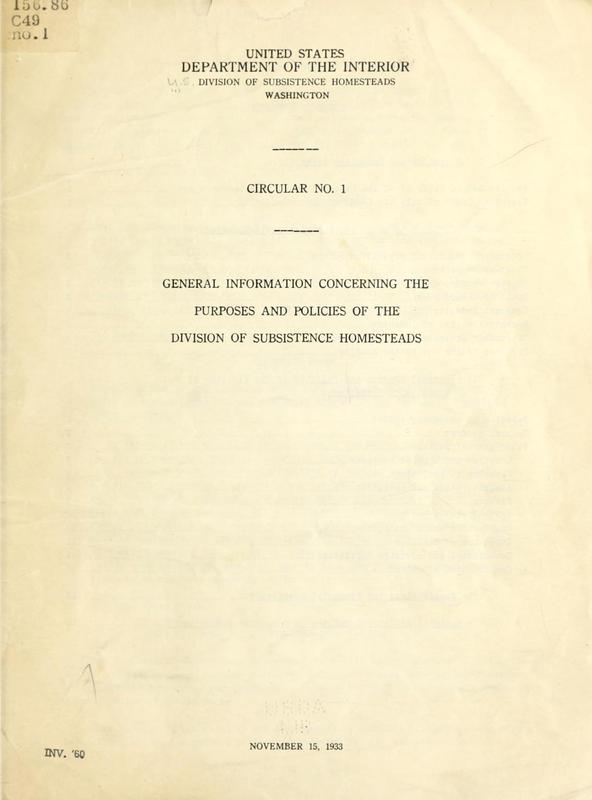 U.S. Department of the Interior. Division of Subsistence Homesteads

"The Division of Subsistence Homesteads is a unit in the Department of the Interior, subject to such special policies, rules and regulations as the Secretary, acting for the President, may prescribe. It is not a part of the Federal Emergency Administration of Public Works.

This Circular is intended to provide general information on the purposes of the legislation and on the general policies formulated for its administration."