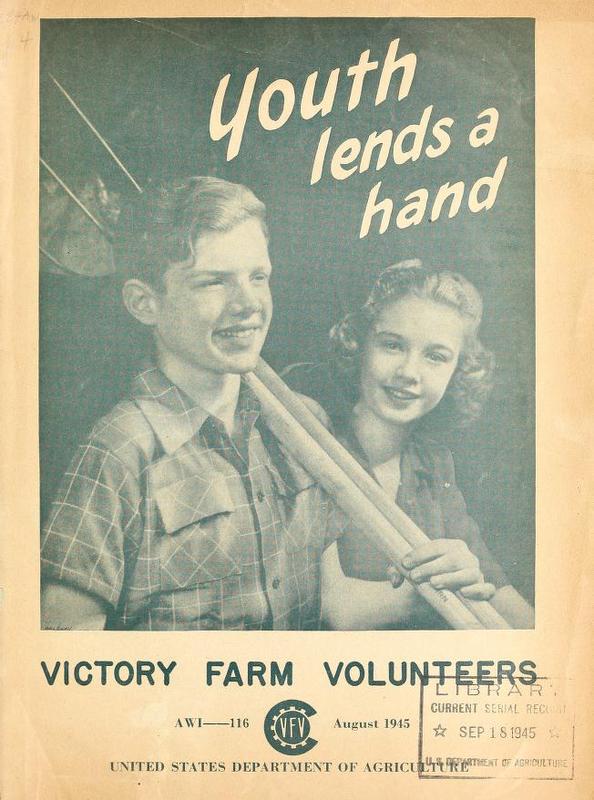 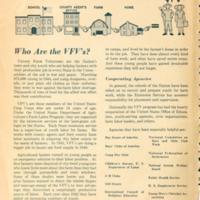 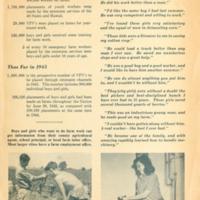 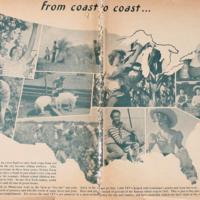 Victory Farm Volunteers are the Nation's town and city youth who are helping farmers with their production job in every State in the Union- soldiers of the soil in war and peace. Marching 875,000 strong in 1944, and using dungarees, overalls, or just plain old clothes as their uniforms, they went to war against the farm labor shortage. Thousands of tons of food for the allied war effort was their contribution.

VFV's are those members of the United States Crop Corps who are under 18 years of age. Under the United States Department of Agriculture's Farm Labor Program, they are organized by the extension services of the land-grant colleges in the States. Each State extension service has a supervisor of youth labor for farms. He works with county agents and their county farm labor assistants in adapting this labor source to the needs of farmers. In 1945 VFV's are doing a bigger job to insure our food supply in 1946.

Agricultural leaders turned to young people as an emergency solution to their labor problem. At first farmers were skeptical of city-bred youngsters who knew little more about the farm than they had seen through automobile and train windows. Some of these doubts were borne out. But after farmers learned to direct the nimble fingers and teen-age energy of the VFV's to best advantage they discovered a surprisingly productive source of labor. Each year since 1942 they have called on increasing numbers of youth.

VFV's have learned to be hired men and harvest hands. They have swarmed into trucks, gone to camps, and lived in the farmer's home in order to do the job. They have done almost every kind of farm work, and often have saved entire crops. And these young people have gained invaluable experience they will not forget.