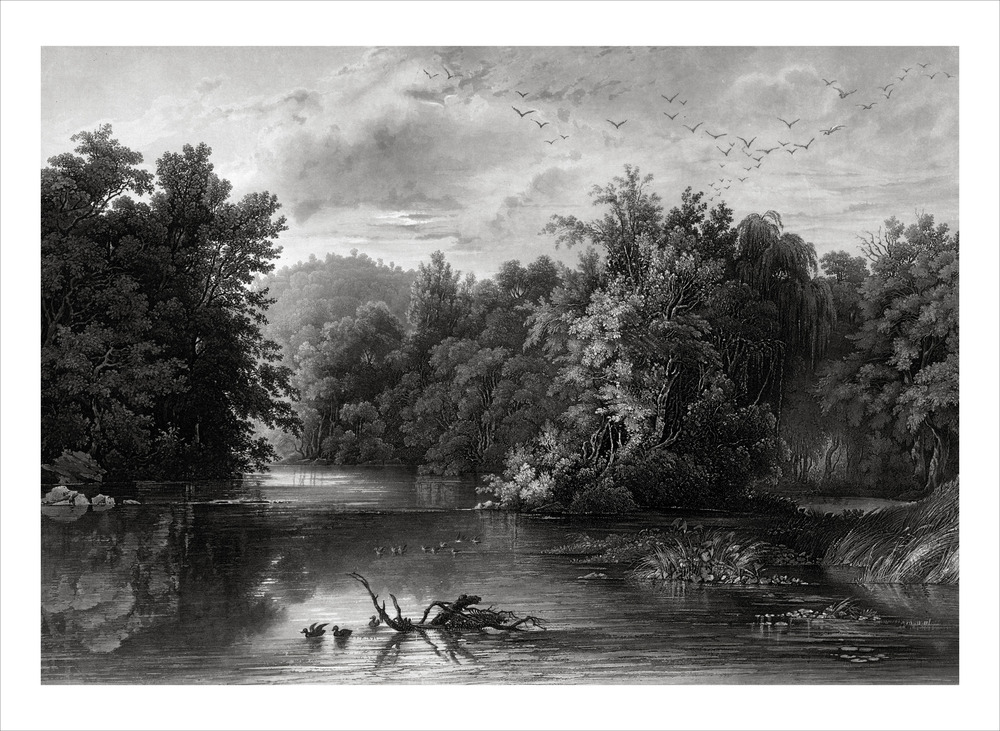 Tableau 1. Forest Scene On The Lehigh

Karl Bodmer was born in Zurich, Switzerland in 1809. His uncle Johann Jacob Meier, a local engraver and watercolorist, trained him in art. In January of 1832, while traveling in Germany and contributing engravings of Rhineland to several albums, Bodmer met Maximilian, who was searching for a draftsman to accompany him to North America. Thus began a two-year journey during which Bodmer performed his job superbly and experienced many adventures as well. He painted portraits of famous Indian chiefs in their natural settings as well as many landscapes when the entourage stopped sometimes rather unexpectedly due to snags along the river route.

On one unfortunate occasion, he was lost on the prairie near Fort Clark for several hours. Another time his paints and oils solidified due to the cold winter weather. A young and patient man, Bodmer withstood the trials of the trip, and at its conclusion, he returned to France and completed eighty-one plates from the original 400 watercolors. Some plates were made to accompany Maximilian's account of the expedition, while others were sold on a subscription basis. In 1836, Bodmer exhibited many of his plates at the Paris Salon. During the 1850s and 1860s, he won awards for his work; Bodmer continued to paint landscape and animal subjects until his death in 1893 at the age of eighty-four. 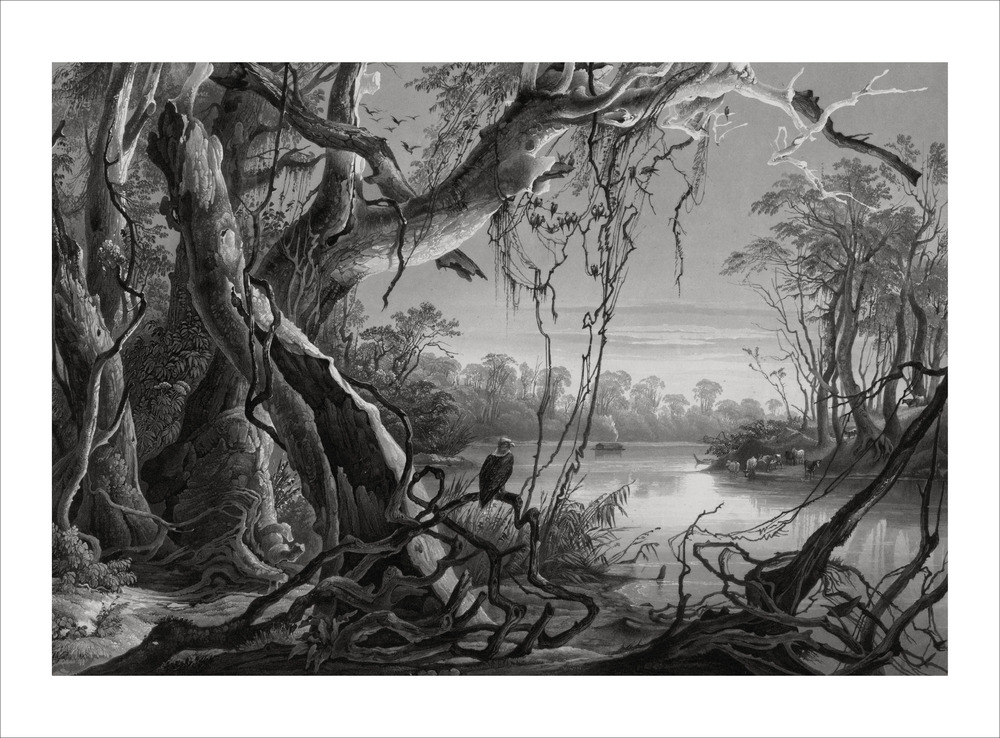 In the atlas accompanying Travels in the Interior of North America, the images are aquatints. An aquatint is an engraving produced by a process of etching in which spaces are bitten in with aqua fortis, or nitric acid, to create an effect resembling a drawing in India ink or watercolors.

Over a period of nine years (1834-43), many engravers and printers assisted Bodmer with the production of these plates. They generated five editions of Bodmer's etchings, colored or uncolored, on at least three different stocks of paper, including titles of plates in German, French or English. In all, thirty-three plates were designed as vignettes to preface chapters of the German text for Maximilian's account of the journey; forty-eight
folio-size tableaux were issued separately.

After the printing of these editions, Bodmer returned most of the printing plates to Maximilian. During the Franco-Prussian War the Royal Secretary kept them at the Prussian Legation. At the end of the war the plates were returned to Neuwied. In 1959, the New York art firm of M. Knoedler and Company purchased the plates as well as Maximilian's journals and notes, which they later lent to the Joslyn Art Museum in Omaha, Nebraska, for an exhibit in 1961. The Northern Natural Gas Company of Omaha bought the collection from Knoedler and eventually donated the collection to the Joslyn Art Museum in 1986. 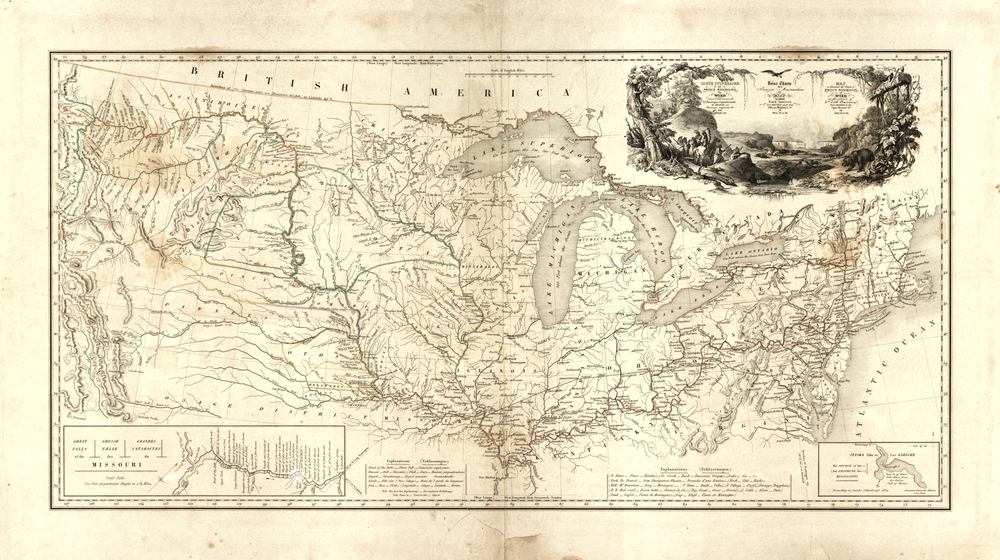 Map to Illustrate the Route of Prince Maximilian of Wied in the Interior of North America from Boston to the Upper Missouri in 1832, 33 & 34.

Travels in the Interior of North America is Special Collections' most significant record of the culture and daily lives of the original human inhabitants of North America. As Maximilian, Bodmer, and Dreidoppel traveled westward across the continent, they met many of these indigenous peoples, including the Omaha, Sioux, Assiniboin, Piekann, Mandan, and Minatarre Indians. The scanned photographic reproductions of a select number of Bodmer's images represent landscapes and people Maximilian's team encountered at different points along the expedition route. Follow the expedition team's route shown in red on the map titled Map to Illustrate the Route of Prince Maximilian of Wied in the Interior of North America from Boston to the Upper Missouri in 1832, 33 & 34.

Arriving in Boston, Massachusetts, on July 4, 1832, the Maximilian entourage proceeded to New York City and Philadelphia, then westward by stagecoach to Bethlehem, Pennsylvania. From Pittsburgh, they sailed by steamboat on the Ohio River past Cincinnati, Ohio, and Louisville, Kentucky, to Mt. Vernon, Indiana. 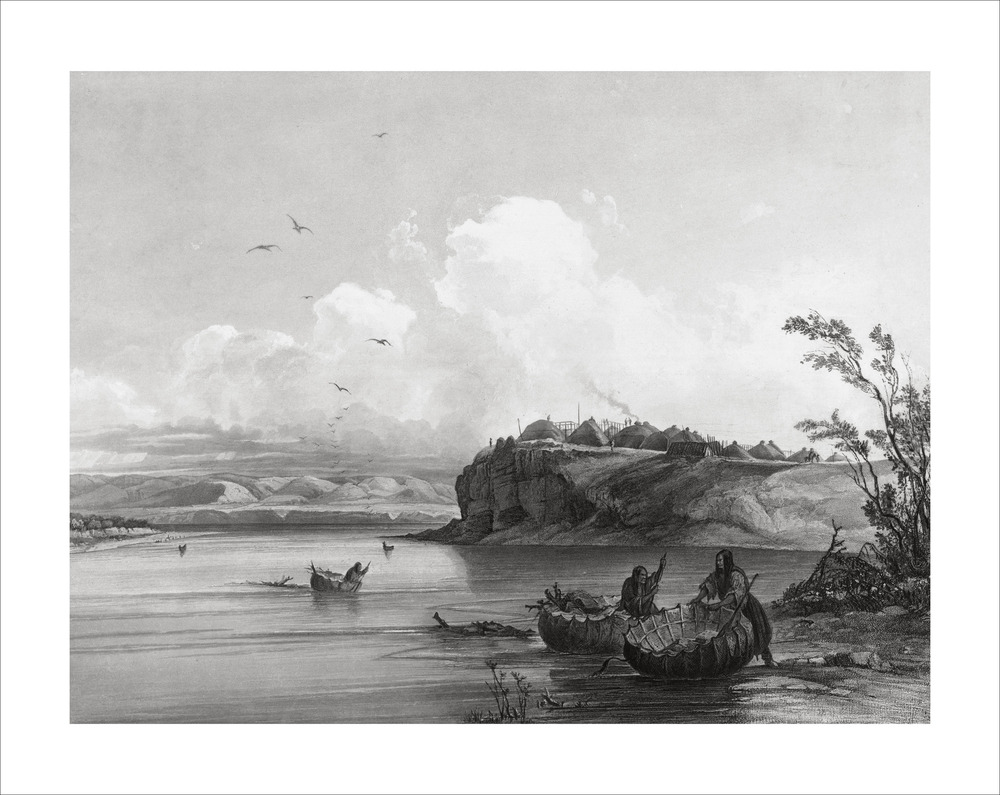 The expedition trekked north to New Harmony, Indiana, on the Wabash River where they met the French artist-naturalist, Charles Alexandre Leseur, and the American entomologist, Thomas Say, and then to St. Louis, Missouri, where they made the acquaintance of retired explorer, William Clark.

In April of 1833, they set sail on the Yellow-Stone, a steamboat owned by the American Fur Company, up the Missouri River to Bellevue, Nebraska, and Fort Pierre, South Dakota, and from there to Fort Union near the North Dakota-Montana border. At various points along the route, they disembarked at trading posts, owned by the fur company, which allowed them to observe and interact with indigenous people. In July, they continued upriver to Fort McKenzie, Montana, at the mouth of the Marias River.

Setting forth on their return trip during the fall-winter of 1833-34, the explorers started downriver to Fort Clark, north of what is now Bismarck, North Dakota; and by April they had landed in St. Louis. Heading eastward, they took an alternate route via the Great Lakes to Buffalo and Albany, New York. On July 16, 1834, they boarded ship in New York and, by the second week in August, landed in Le Havre, France, ending a remarkable two-year odyssey.