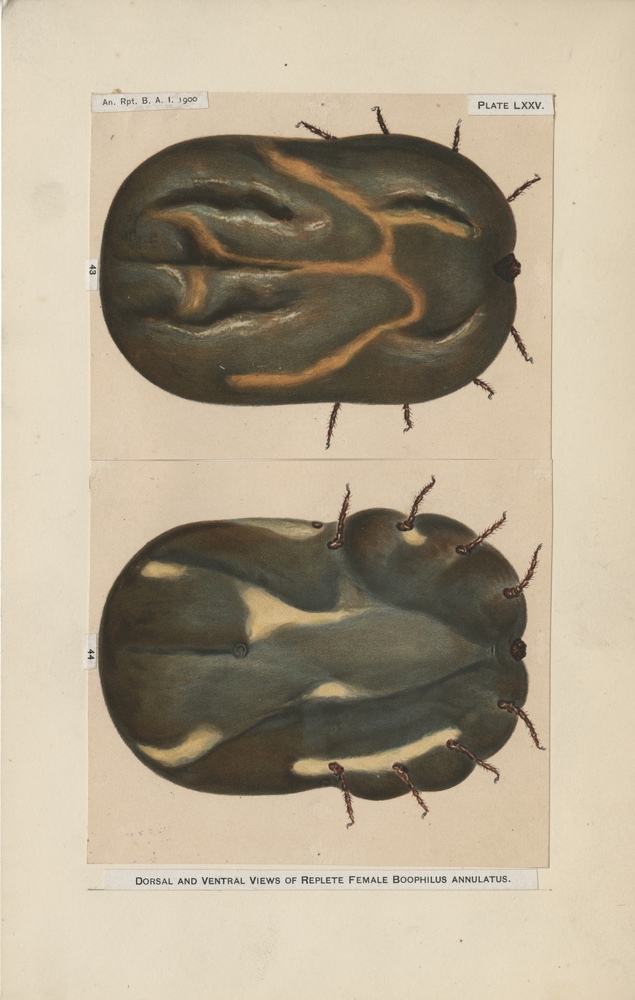 By the 1860s, livestock producers in the U.S. had long been concerned with cattle fever.  The disease took huge tolls on their herds, but its causes and means of spreading were not well-understood. It had arrived in North America in the 1600s, brought by cattle imported from the Spanish colonies of the West Indies and Mexico. It spread throughout the southern United States and then began working its way northward as infected herds were driven across the plains to cattle markets. By 1877, northern ranchers were determined to stop southern herds from contaminating their own. Without organized control efforts or government intervention, cattlemen fended for themselves.  Sometimes they sent armed parties to turn back herds on their trip north through Missouri, Kansas, Arkansas, and Indian territory.

Texas cattle fever caused an uproar. No one knew what caused the disease, how southern cattle spread it, or why it disappeared in the winter. It was time to find a solution.

Daniel Elmer Salmon, a veterinary surgeon, joined the Department of Agriculture in 1879 and set to work investigating animal diseases in the southern states. Salmon found that healthy cattle grazing on pastures with infected animals became susceptible to cattle fever. He also studied the geographic range of the disease. This enabled him to establish a quarantine line, extending from the Atlantic coast west through Virginia, between infected and disease-free areas. Movement of livestock originating from south of this boundary had to be regulated in order to control transmission of cattle fever.

Salmon’s work clearly demonstrated the need to keep infected and non-infected cattle apart, and mapped the dividing line between where the disease was common and where it had yet to spread. With this information, the government could address the demands of northern livestock producers who sought to regulate interstate movement of cattle. Congress established the U.S. Department of Agriculture’s Bureau of Animal Industry (BAI) on May 29, 1884, partly for the purpose of setting and enforcing such regulations (23 Stat. 31). The new bureau combined the research functions of the USDA’s Veterinary Division with the enforcement authority of the Department of Treasury’s Cattle Commission. Salmon was named chief of the BAI. 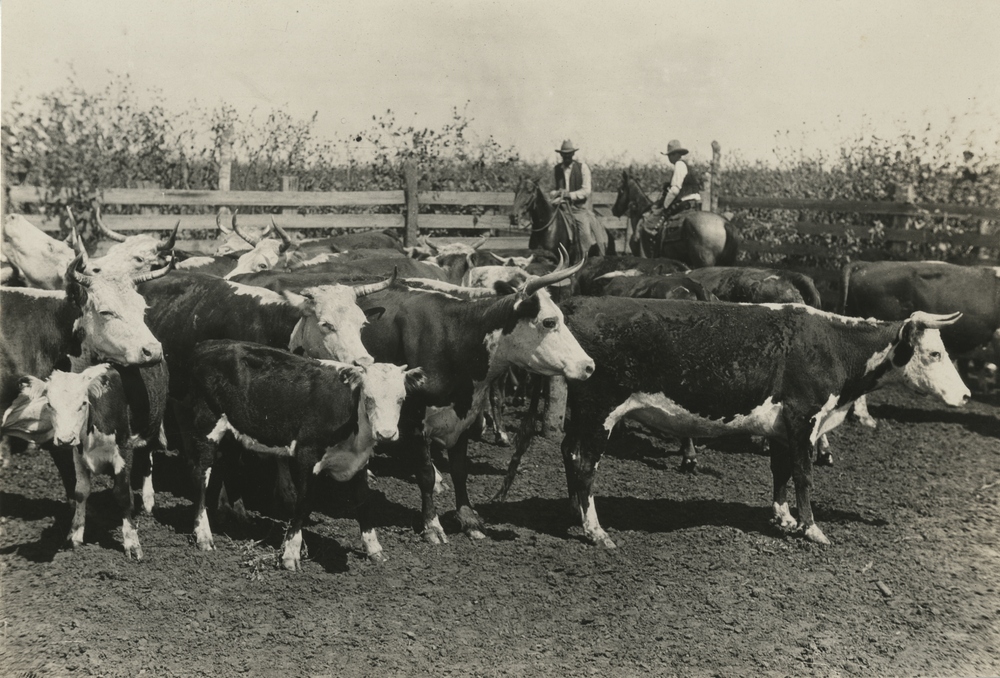 Cattle showing signs of ticks in Georgia, circa 1920s

The investigation of cattle fever was among the top priorities at the fledgling BAI. Salmon decided to take a risky and controversial step—he approved a plan to investigate a common theory among cattlemen that ticks were responsible for cattle fever. Many scientists dismissed the BAI’s pursuit of a layman’s theory as nonsense. However, Salmon believed the idea had merit, because his own observations showed a strong correlation between areas of tick infestation and cattle fever.

Three young veterinary scientists on Salmon’s staff were given charge of the investigation. Theobald Smith, a trained microscopist and Salmon’s laboratory assistant, studied the microbial cause of Texas fever. Frederick L. Kilborne, who supervised the BAI’s experiment station, was responsible for testing the theory that ticks transmitted the disease. Cooper Curtice, head of the bureau’s zoological laboratory, turned his attention to the biology of the tick.

The BAI’s research paid off.  Some of its significant findings included: 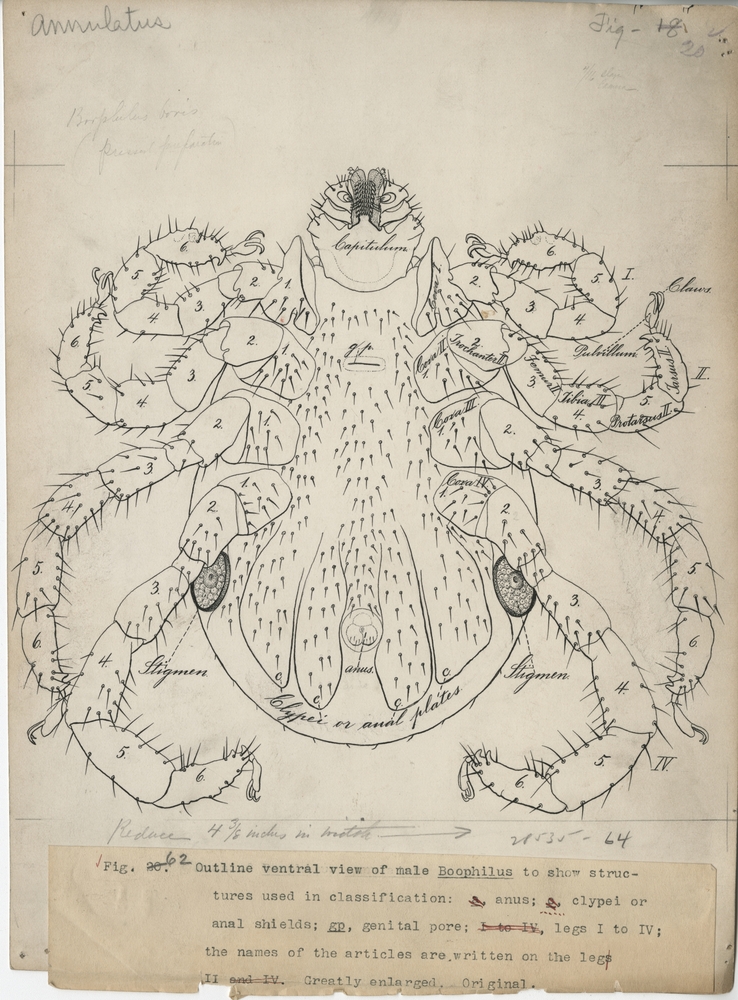 The cattle fever research showed that ticks carried the organism responsible for the disease. It was the first time in history that a disease agent was proven to be transmitted from an infected animal to an uninfected one by means of an intermediate host, in this case the tick.

This new knowledge about cattle fever opened the way to understanding other insect vector diseases, such as malaria, yellow fever, typhus, and many others. It also pointed toward a solution: in order to control the spread of the disease, something would need to be done to combat ticks.

In 1905, the U.S. Department of Agriculture began a cooperative effort with state governments to eradicate cattle ticks. Secretary of Agriculture James Wilson established the Cattle Fever Tick Eradication Program in 1906, which shared costs and resources among the federal government and 14 southern states and California. 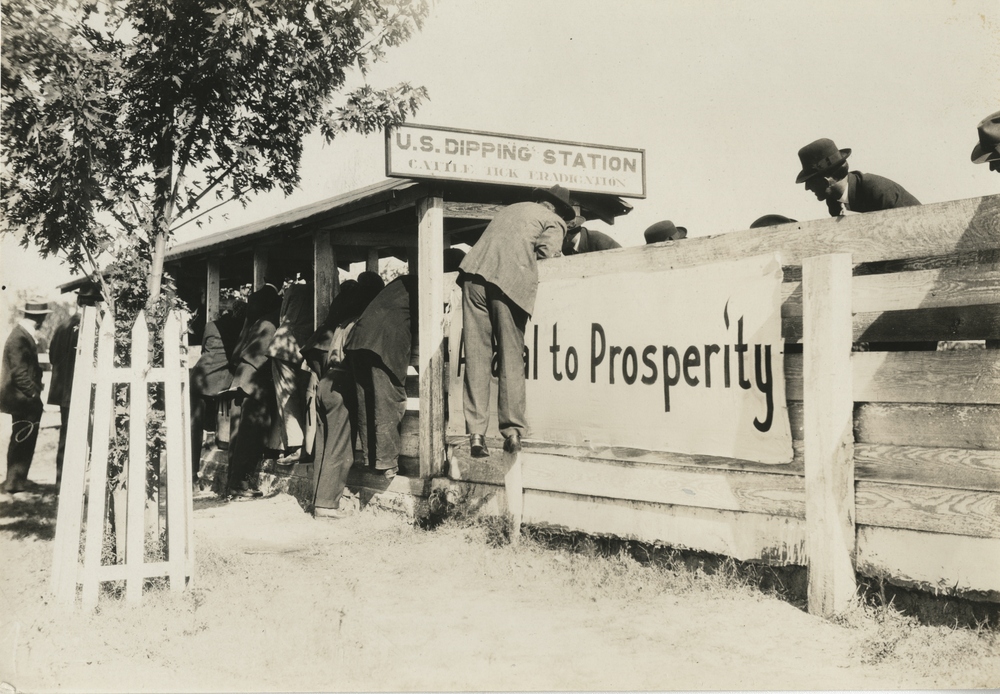 Meanwhile, the BAI continued its scientific work on Texas cattle fever. It developed treatment methods, including dipping solutions and tank systems, which were effective in ridding animals of ticks. In 1910, the first arsenical solution (made from white arsenic, soda, and pine tar) was officially permitted for cattle-dipping after the BAI’s field tests had shown it to be effective. Tick eradication was so successful that a division of the Bureau of Animal Industry was dedicated to it in 1917.

By 1954, the application of a standard arsenical dip treatment at 14-day intervals had resulted in eradicating both species of cattle ticks, Boophilus (Margaropus) annulatus and B. microplus, in the 15 states participating in the government program, except for a narrow zone along the Texas-Mexico border, where re-infection occurred from time to time because the adjacent area in Mexico was heavily infested. 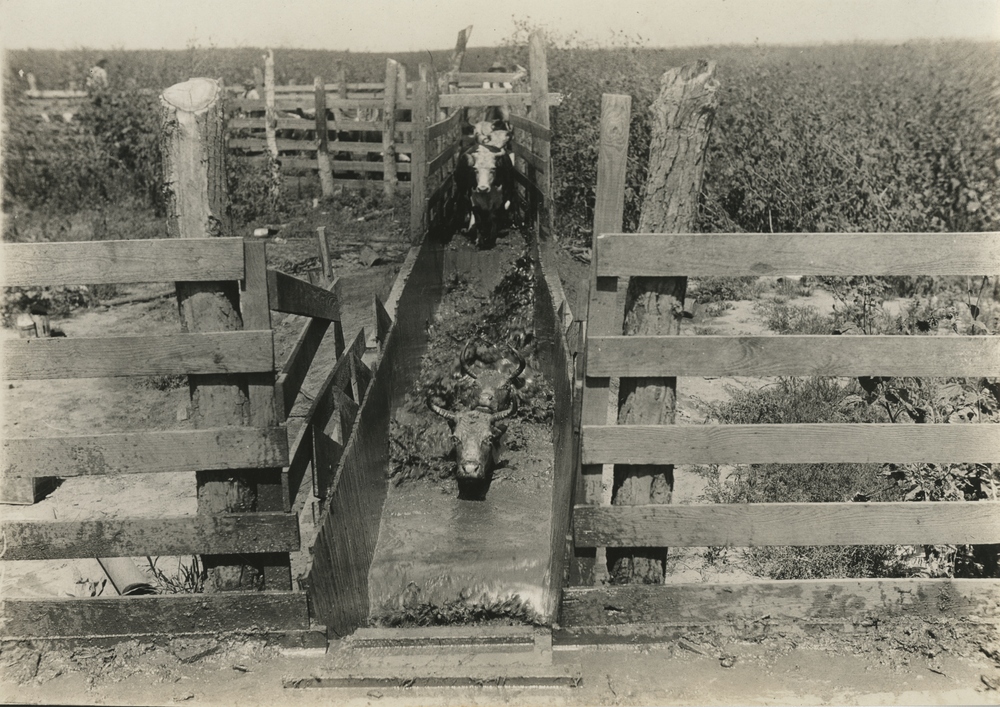 Cattle in process of dipping, circa 1920s

Control of ticks made possible many improvements in cattle production and facilitated the transport of cattle throughout the U.S. and Canada. Tick eradication revolutionized the agricultural economy of the American South. With cattle fever under control, the South gained open access to northern markets and became an important beef cattle producing region by the mid-20th century.