In the 1920s, USDA scientists determined that educating the public to recognize the pest and treating infested animals would be the best weapons against the screwworm. As early as 1920, the USDA produced films to teach farmers and ranchers to identify and treat screwworms. At the time, researchers confused the primary screwworm, which requires living flesh to breed, with other species of blowflies, which consume the carcasses of dead animals and the decayed flesh of living ones.

Was the Blowfly the Real Livestock Killer?

"Screw Worms- How to Fight Them" by United States Department of Agriculture. 1920.

In the early 1930s many scientists began to doubt whether they had correctly categorized the screwworm. By using traps baited with attractants such as rotting liver, scientists captured flies to inspect them for existing blowfly characteristics. Weekly interviews with ranchers determined the number of animals infested and allowed scientists to conclude that the traps actually helped reduce livestock infestations.

Migration of the Screwworm Plague 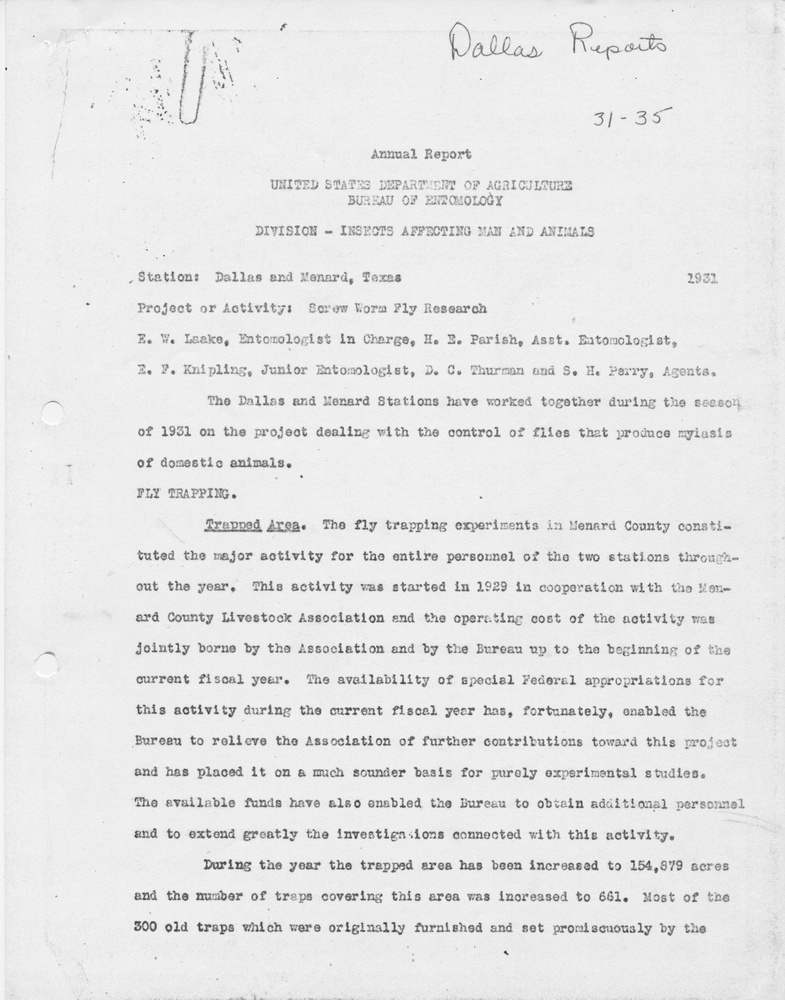 In 1933, the screwworm migrated from the Southwest to the Southeast United States by way of a shipment of infested animals. By 1934, ranchers reported infestations in Mississippi, Alabama, North Carolina, South Carolina, Georgia, and Florida. Besieged by pleas for help, USDA and Agricultural Extension Service agents set up demonstrations and state fair exhibits to teach farmers and ranchers to prevent infestations in their livestock.

USDA also enlisted the Civilian Conservation Corps (CCC) to help. CCC agents rode cattle ranges to keep them free of materials that might cause wounds, separated infested animals from healthy ones, and burned animal carcasses. The Federal Emergency Relief Administration provided funds for CCC to build and repair pens for segregation of infested animals. 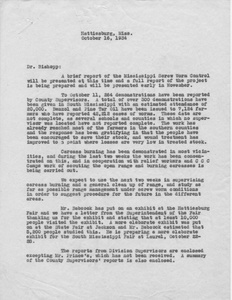 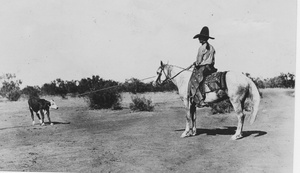 Cutting Out and Roping 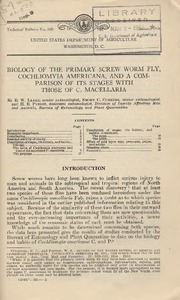 Biology of the Primary Screw Worm Fly, Cochliomyia americana, and a Comparison of Its Stages With…

In 1933, Emory C. Cushing, an entomologist with USDA's Bureau of Entomology and Plant Quarantine, and Walter S. Patton, a scientist at the University of Liverpool in England, published their discovery that the New World screwworm is a distinct species from the common blowfly. In 1936, USDA entomologists Cushing, E.W. Laake, and H.E. Parish outlined the differences between Cochliomyia americana and C. macellaria. One key difference is that the New World screwworm feeds on living, not dead, tissue.

New Information for Ranchers and Farmers

Public education in the late 1930s encouraged calving, branding, and dehorning out of fly season; prompt treatment and isolation of wounded animals; and avoidance of wounds. USDA continued to recommend pine tar oil and benzol as the best wound treatment and burning carcasses to reduce the spread of infestation. 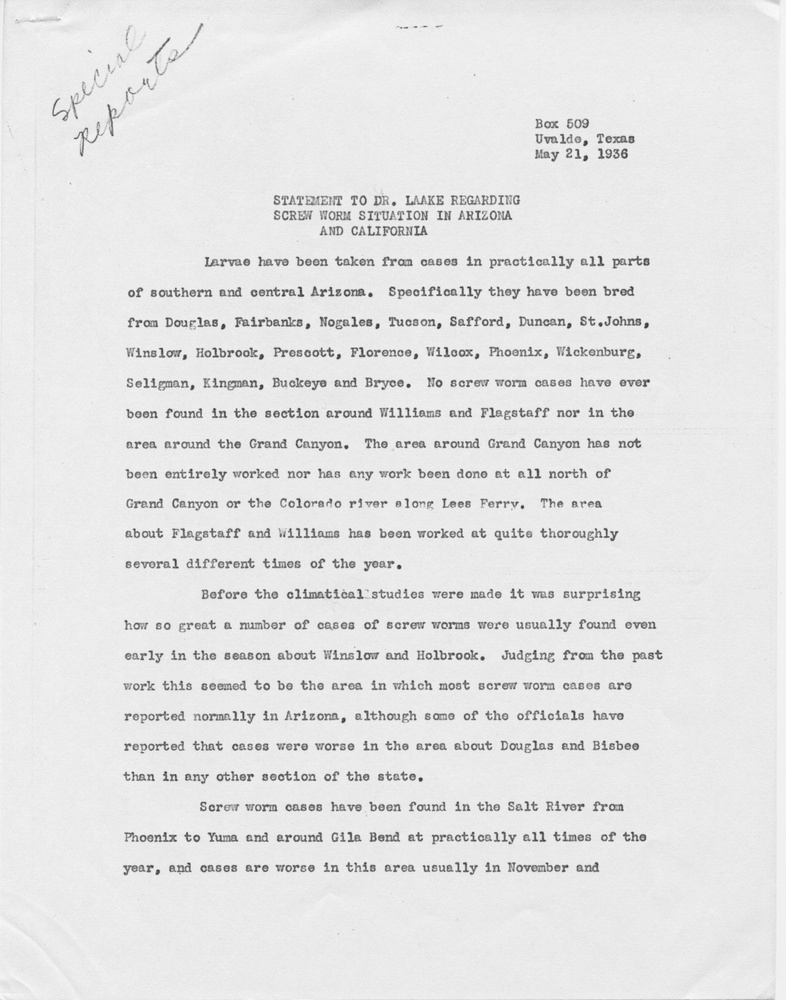 Report copy to E. W. Laake. 1936 May 21. "Statement to Dr. Laake Regarding Screw Worm Situation in Arizona and California."

Cushing and Patton's discovery that the screwworm was a different species ignited USDA research on treatment and control. One dilemma facing scientists was that live animals were the only way to produce screwworms for experiments, an inhumane and costly practice. Entomologist Raymond C. Bushland developed an artificial screwworm-rearing medium consisting of ground meat, beef blood, water, and a small amount of formaldehyde. This solution allowed production of a large number of screwworms at minimum cost. Scientists also began to study the effects of climate on screwworm growth and infestation. They concluded that screwworms would be able to survive as far north as Needles, California, and Kingman, Arizona.

Research at Menard, Texas, included a search for a more effective larvicide than benzol and pine tar oil. At Menard, Edward F. Knipling conducted extensive studies of larvicides, reporting in 1938 that new larvicides showed promise. This study and related research led to development of a much-improved wound treatment later known as Smear 62. 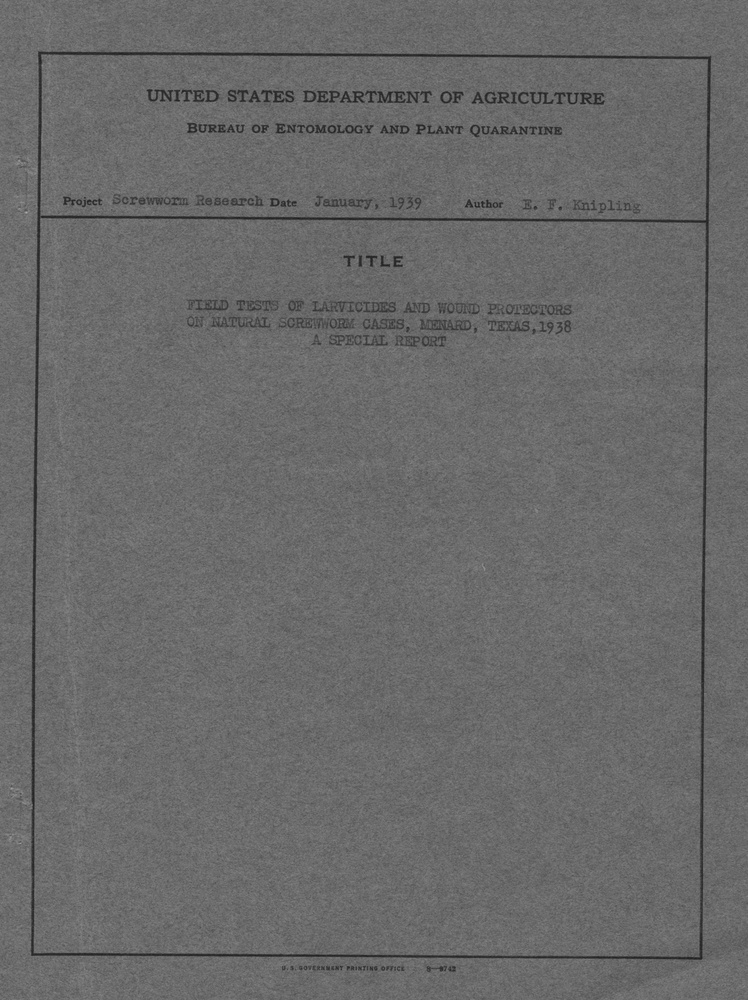 Knipling theorized that the real solution was to prevent wound infestation by reducing or eliminating the screwworm. He developed the theory of autocide, in which sterile males would be released to overwhelm the natural population. The plan presented two problems: how to produce enough laboratory-reared screwworms and how to sterilize them in mass. By the end of the 1930s, three of four critical elements were in place

The last piece of the puzzle”how to sterilize mass quantities of screwworm flies”eluded Knipling and the other USDA scientists.