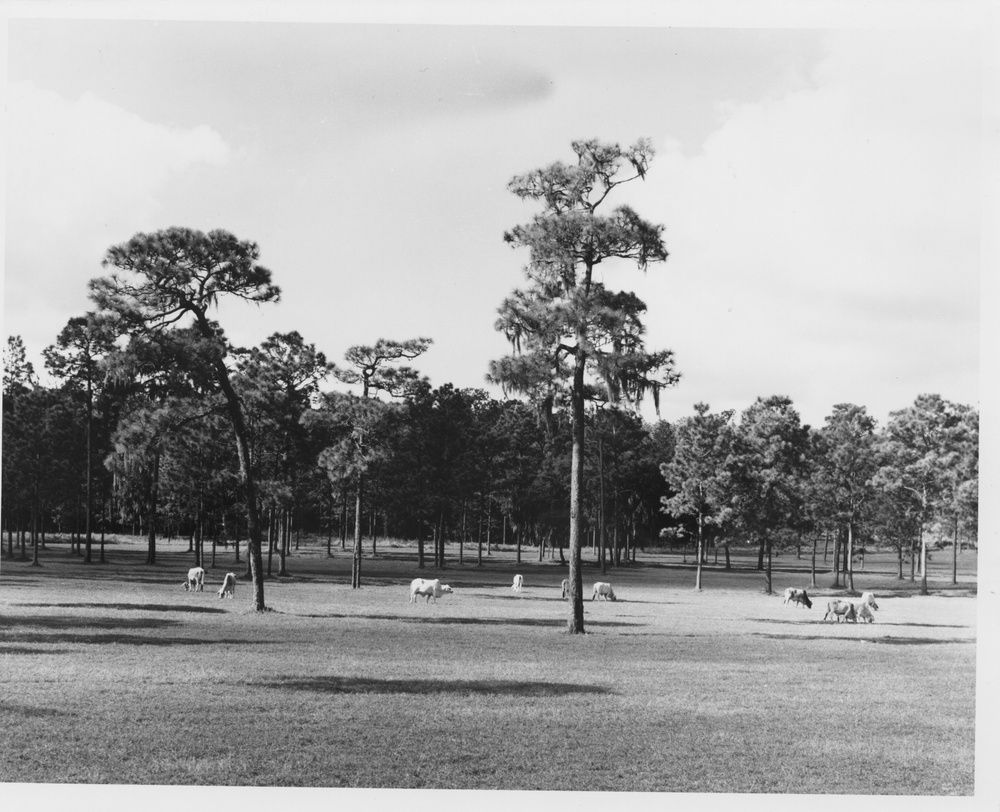 The success in Curaçao and the activities of the Orlando facility attracted more and more attention in the United States. Interest by ranchers and other livestock producers gave rise to hope that a full-scale screwworm eradication project would start soon in the Southeast United States, with a focus on Florida. Researchers at Orlando and other USDA labs began planning for such a program.

The Agricultural Research Service (ARS) team that surveyed the screwworm situation in Florida returned a report strongly supporting an eradication strategy for the entire Southeast. Congress heard testimony in 1956 from USDA scientists, including Edward F. Knipling, who promoted the effectiveness of the Sterile Insect Technique (SIT). Congress allocated matching funds for the program, $1.6 million the first year. 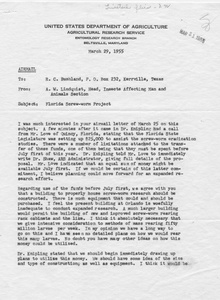 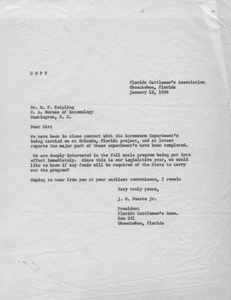 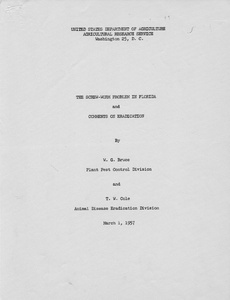 The Screw-worm Problem in Florida and Comments on Eradication 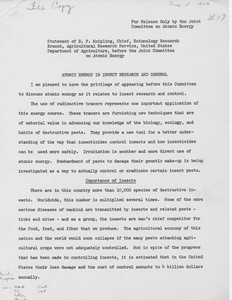 Florida Eradication Key to the Southeast

A significant factor contributing to the successful eradication of the screwworm in the Southeast was the region's geography. With the Gulf of Mexico and the Caribbean Sea as a barrier to infestation from beyond U.S. borders and since overwintering screwworm populations were limited to the Florida peninsula and southern Georgia, eradication in these two areas would free the entire southeastern United States from the screwworm. Careful inspection of livestock moving into the Southeast from beyond the Mississippi would prevent reinfestation from the West. 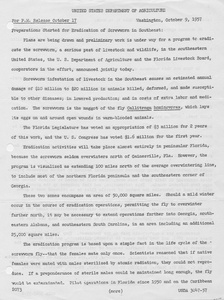 Preparation Started for Eradication of Screwworm in Southeast 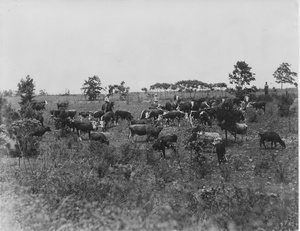 Photograph "View of Herd of Cattle on Roosevelt Farm [Georgia] 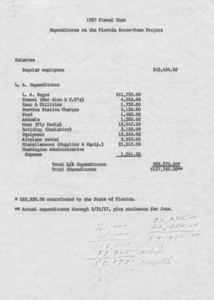 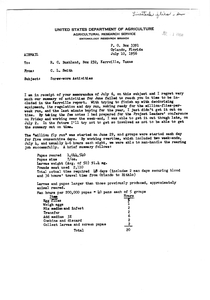 The Florida legislature provided some limited funding through the Florida Livestock Board for a test area of mainland Florida. In 1957, SIT was used in a 2,000-square-mile area east of Orlando. Eradication reached 70 percent. This project helped the scientists estimate the resources needed to rid the whole state of screwworms.

To produce the immense number of sterile flies needed to cover the Orlando East project and then the whole Florida peninsula, new fly-production facilities were needed. A larger facility was built in Bithlo, Florida.

The Bithlo facility allowed more room for research, much of it focused on improved fly production. The staff wanted to produce hardy flies that would compete with fertile flies in the wild. Early on it was obvious that larger larvae meant larger, more competitive flies. Research to determine the best food for growing larvae was, and remains today, a key concern. Attempts to provide the best nutrition for the larvae at the least possible cost led to many experimental feeding mixtures, including honey, beef hearts, and whale meat.

One of the greatest—and smelliest—problems that confronted staff was the disposal of waste from the feeding media used for the larval stage. Workers replaced the media every few hours so the larvae would continue feeding. Bushland suggested the possibility of converting the media into hog feed. Veterinarian R.D. Radeleff replied, "Even a hog draws the line at some things." 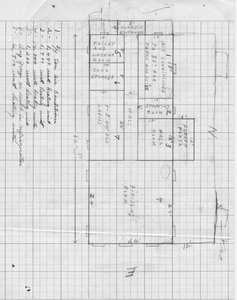 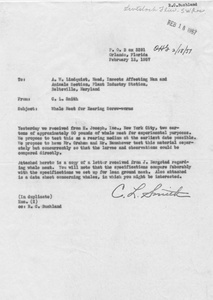 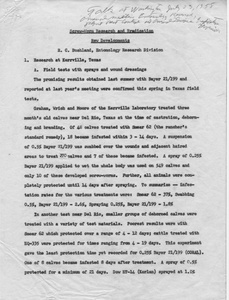 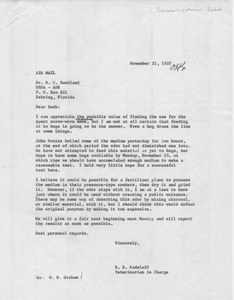 Letter from Radeleff to Bushland, 1957-November-21 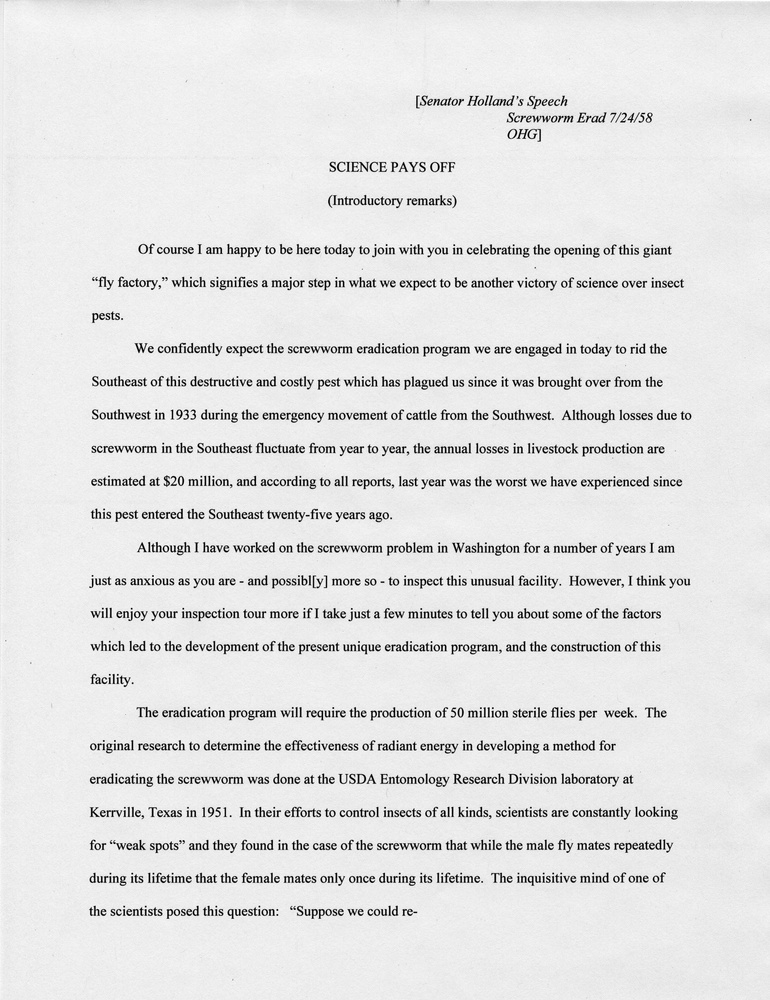 The Southeast eradication project was to start at the end of 1958, after construction of the newest and largest production facility in Sebring, Florida, and while the screwworms overwintered in the Florida peninsula. The winter of 1957-1958, however, was extremely harsh, forcing the screwworms to overwinter in a relatively small area at the southern end of the peninsula and enabling early and inexpensive completion of the project. Since the Sebring facility was not finished, production was stepped up in Bithlo and Orlando to get sterile flies ready for the first releases in January 1958.

By the middle of 1958, the Southeast eradication program was in full swing, with aerial drops of sterile flies, a large public information campaign to foster cooperation with livestock owners, and quarantine laws in place. In July 1958, the large Sebring fly production facility opened in an old airplane hangar. It was capable of producing 50 million flies a week, enough sterile flies to inundate Florida. 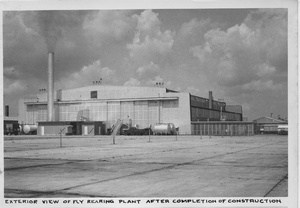 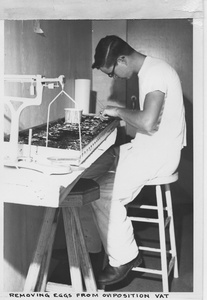 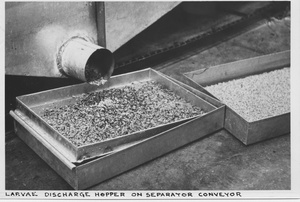 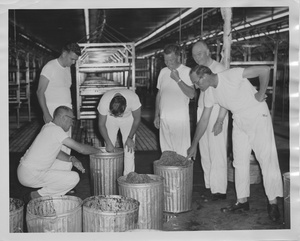 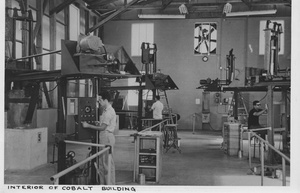 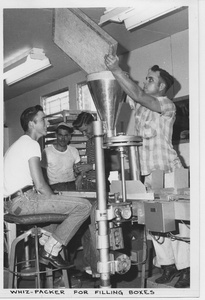 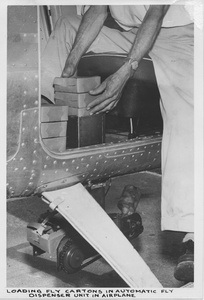 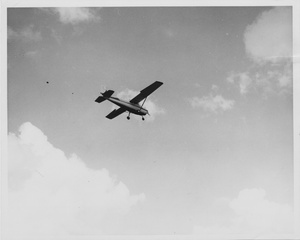 A system of 400 fly traps baited with decaying liver was maintained throughout Florida and its border areas to determine where and how quickly the fertile fly population diminished. Data from the traps indicated which areas needed more sterile flies or were screwworm free. C.C. Skipper, an expert in fly traps, developed more effective traps for the Florida project. Livestock producers, county agents, and others added to the data by making reports of screwworm infestations.

By early 1959—one year after the eradication program started and a year ahead of schedule—scientists claimed success in Florida and the Southeast United States. There were setbacks, however: quarantine regulations were hard to enforce and small reinfestations were reported in Florida, southern Alabama, and Louisiana. The infested areas were quickly saturated with flies, and the outbreaks were successfully controlled. 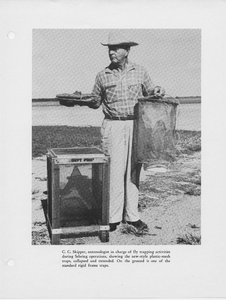 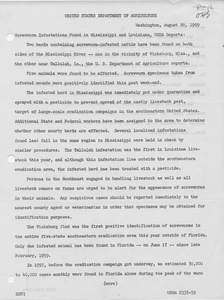