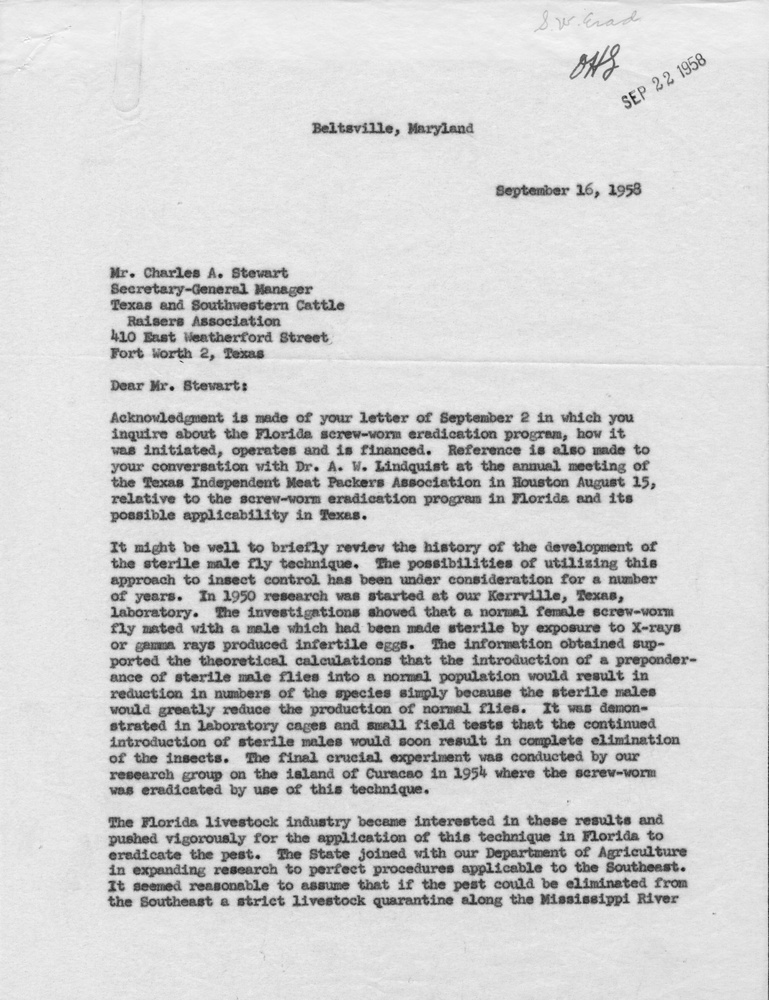 Letter from Edward F. Knipling to Charles A. Stewart. 1958 September 16.

With the effectiveness of the Sterile Insect Technique (SIT) demonstrated so dramatically in Florida, livestock producers in the southwestern United States began to press for an eradication program. Charles Stewart, secretary-general manager of the Texas and Southwestern Cattle Raisers Association, wrote to Knipling in 1958 for help in beginning an eradication program there. Knipling replied that Texas and the other southwestern states would not be free from screwworms until Mexico was also free of the pest.

Survey of Screwworm Flies in Mexico and the United States 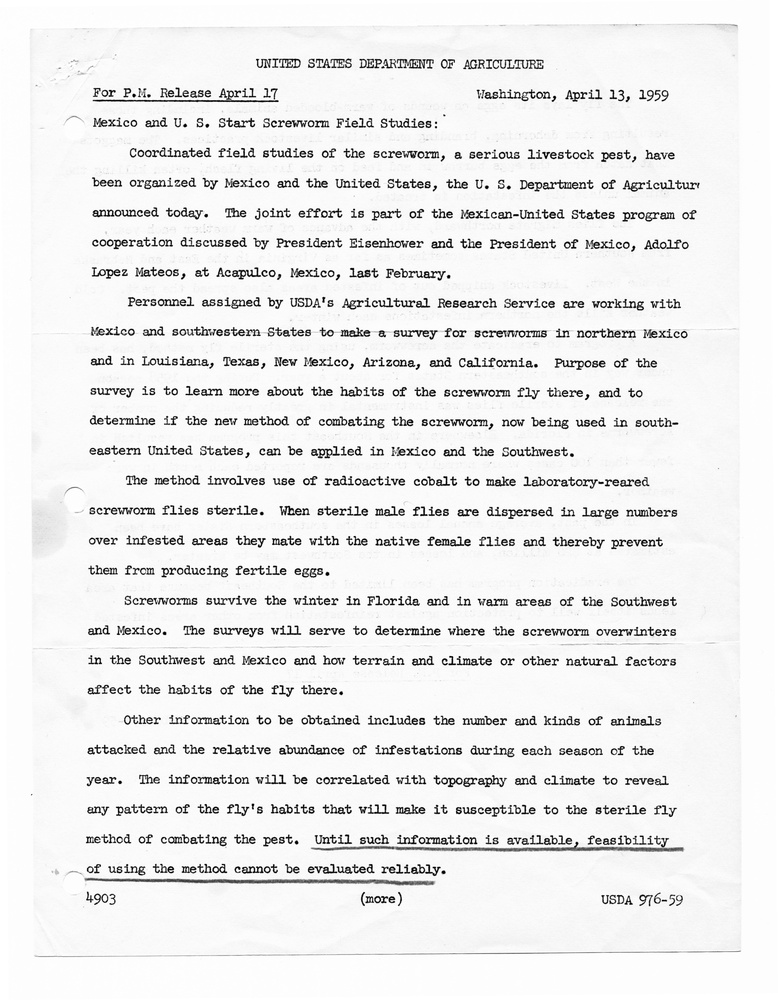 At a summit meeting in Acapulco in 1959, President Dwight Eisenhower and Mexican President Adolfo Lopez Mateos discussed cooperating to eradicate the pest. This led to Mexican and U.S. cooperation in organized field studies of the screwworm flies in northern Mexico, Louisiana, Texas, New Mexico, Arizona, and California. The field surveys allowed scientists to learn more about the habits of the screwworm flies in the Southwest and Mexico and to determine whether SIT would be effective there.

To promote public and private support for SIT eradication of the screwworm in the West, ranchers formed the nonprofit Southwest Animal Health Research Foundation (SWAHRF), in 1961. SWAHRF raised over $1.8 million by the end of 1962 for the construction of sterile fly-production facilities. State and federal appropriations followed. In all, SWAHRF raised over $3 million for the support of ongoing eradication efforts in the Southwest. 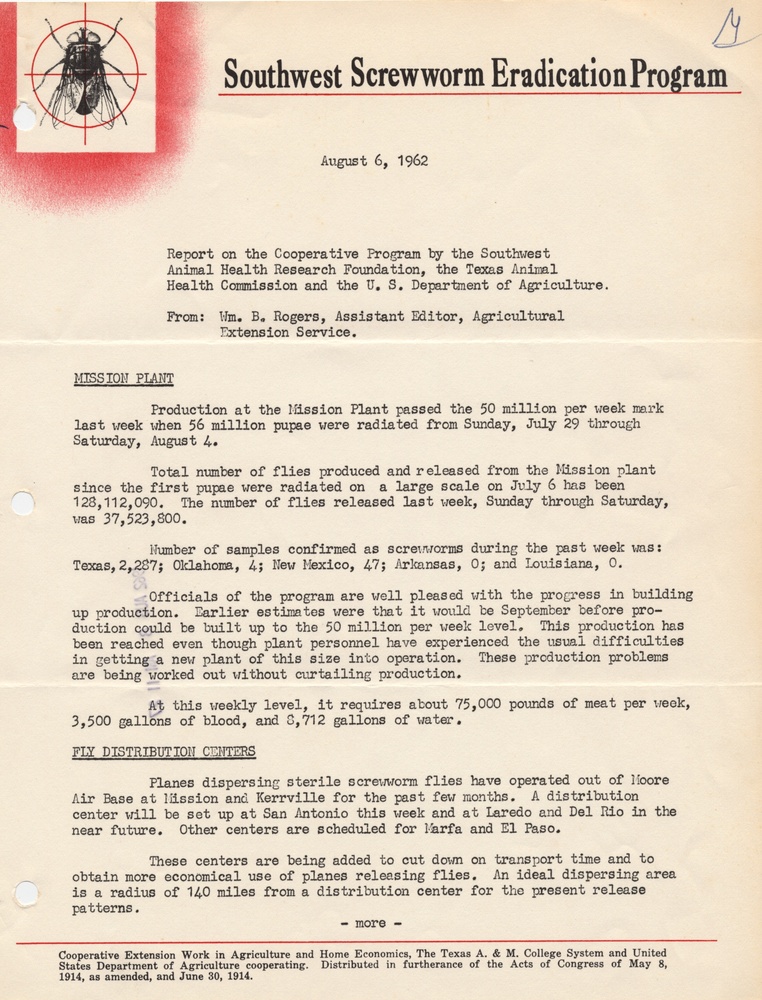 Report by William B. Rogers. 1962 August 6. "Southwest Screwworm Eradication Program: Report on the Cooperative Program by the Southwest Animal Health Research Foundation, the Texas Animal Health Commission and the U.S. Department of Agriculture."

Southwest ranchers took active part in eradication procedures. They regularly inspected animals for wounds and immediately treated wounds to prevent or destroy screwworm infestation. If a wound contained worms, ranchers were instructed to send worm samples along with a report of the farm's location, the type of animal infested, and the location of the wound to county offices or eradication program officials. Screwworm larvae could only be positively distinguished from the blowfly larvae under a microscope. These samples and case reports were the basis for tracking the eradication process and defining which areas were hot spots. Scientists used this information to determine where and how many flies were needed to control outbreaks.

Film "Look Out for Screwworms" by United States Department of Agriculture. [ca. 1963].

The scale of the eradication effort in the Southwest required more sterile flies than the Kerrville, Texas, facility could produce. SWAHRF raised substantial funds, which helped begin conversion of facilities for fly production in Mission, Texas, in 1962. The Mission plant produced over 50 million sterile flies a week by the summer of that year. 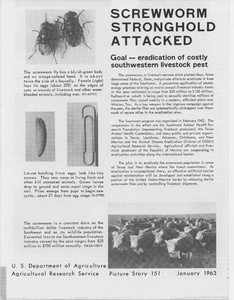 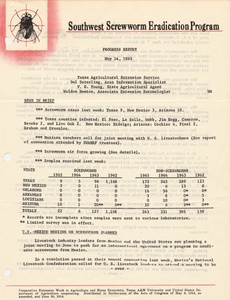 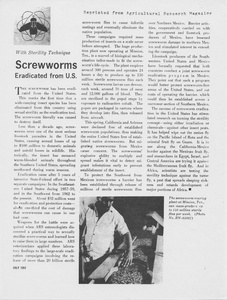 With Sterility Technique Screwworms Eradicated from U. S 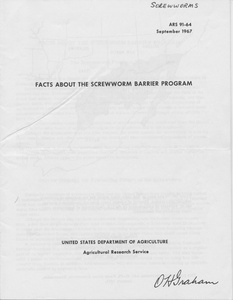 Facts about the Screwworm Barrier Program 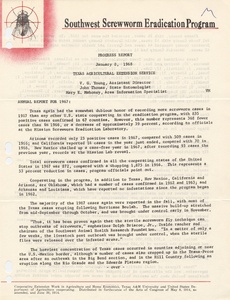 The United States and Mexico Agree to Fight the Screwworm Together

By 1963, researchers discovered that screwworm flies could fly distances of up to 180 miles. This meant that none of the southwestern states could be free of screwworms until the pests were eradicated in Mexico. In 1965, following an outbreak in the Southwest, Mexican and U.S. livestock producers signed a declaration asking for the establishment of a joint program for the eradication of the screwworm from the states on either side of the Mexico-U.S. border.

The United States was declared officially free of indigenous screwworms in 1966. By that year the Mission facility was producing up to 150 million sterile flies per week. U.S. livestock was still vulnerable to reinfestation from screwworms migrating from areas in Mexico that had not been eradicated.

The Barrier Zone Between the United States and Mexico

Although the barrier zone was large and difficult to maintain, screwworm damage in 1967 was less than it had been 5 years previously. In 1962, at the beginning of the program, Texas alone had reported thousands of cases per week. In 1967, it reported only 835 cases. Arizona reported 23 cases, California had 14, and New Mexico recorded none.