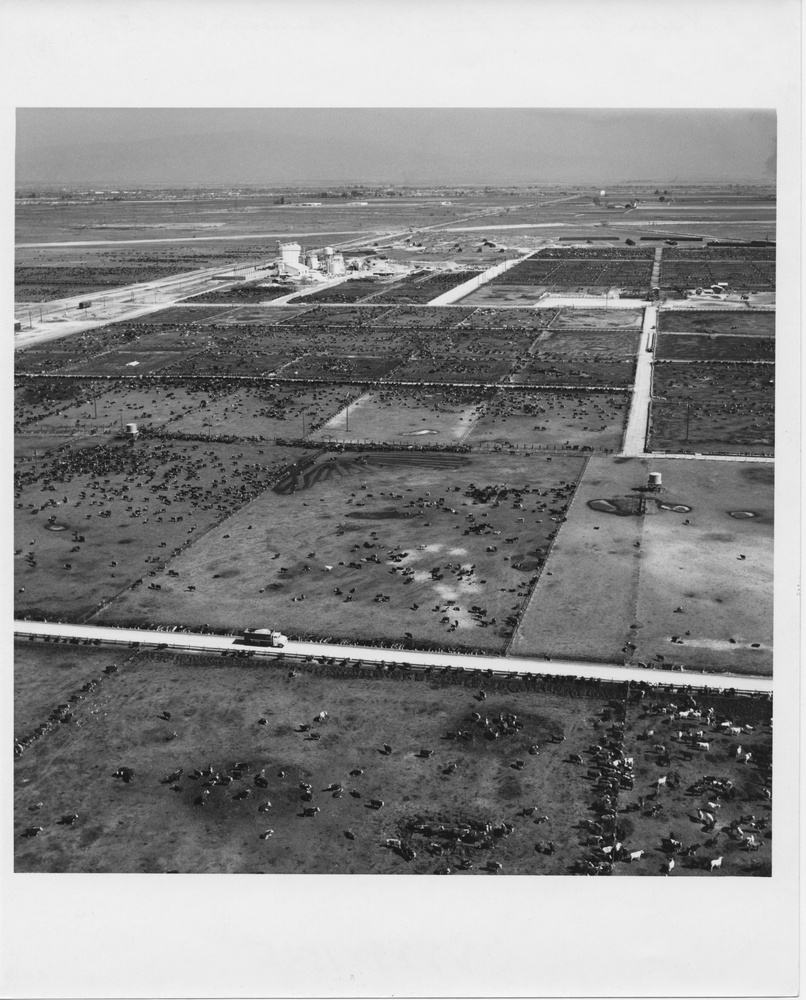 Photograph of cattle in Feed Lots.

The gains against screwworms in the U.S. Southwest proved impossible to maintain in the early 1970s. Imperfect quarantine measures and especially warm, moist weather conditions that are highly favorable to screwworm populations caused major outbreaks. Diminishing awareness and experience among livestock producers in dealing with screwworms also added to increased incidence. 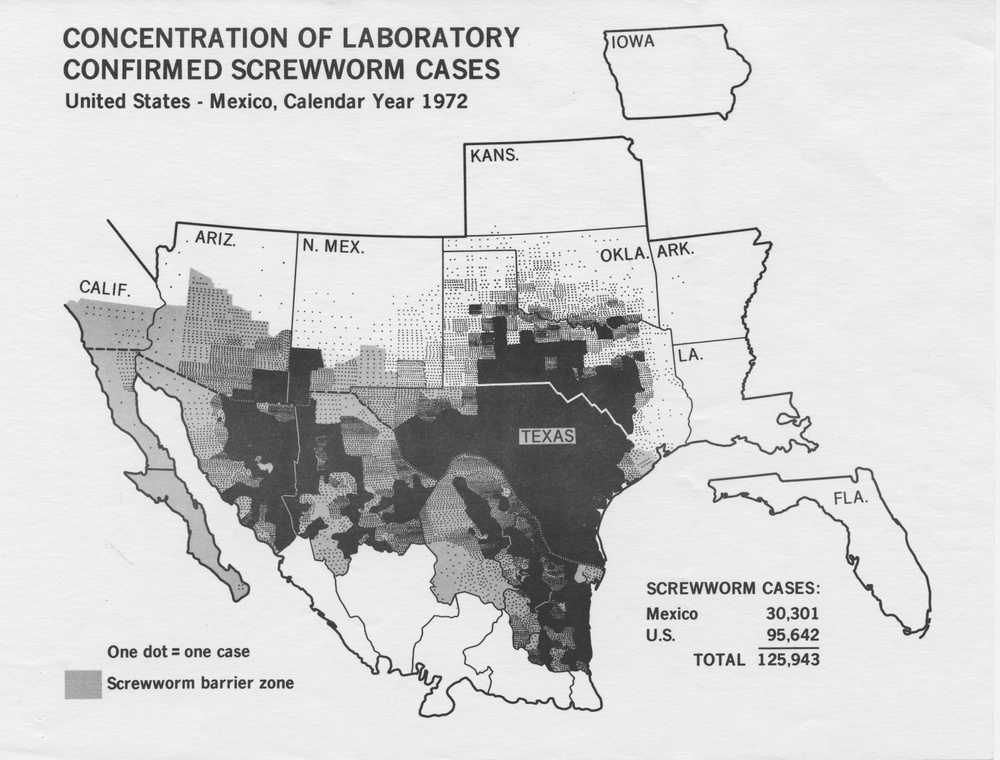 Warm Weather, Screwworm Migration from Mexico Cause of Outbreak 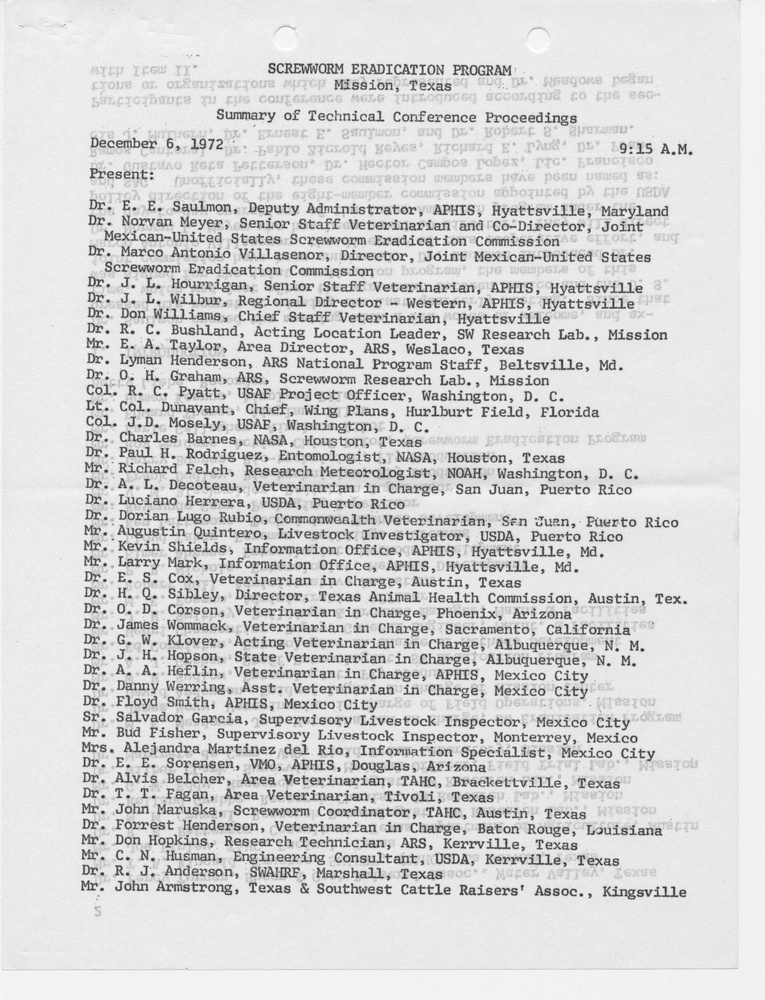 Officials attributed the outbreak to larger than normal numbers of screwworms overwintering. A large amount of rainfall and warm temperatures in the late summer and fall of 1971, followed by the mild winter of 1971-1972, allowed the screwworm population to move farther north and survive the winter. Heavy screwworm activity in northern Mexico resulted in a large influx of screwworm flies migrating across the U. S. border and overwhelming eradication efforts in the Southwest. Many technical conferences were held among scientists, administrators, livestock association representatives, and production staff to address and resolve eradication problems.

In response to this devastating outbreak, USDA staff intensified the public information effort. Officials asked livestock owners to inspect their animals bi-weekly, to postpone animal surgeries until cool weather, to spray animals with preventive compounds, to collect and mail in samples of worms from wounds, and to separate infested animals from healthy livestock.

Film "Fight Against Screwworm" by United States Department of Agriculture. [1972]. 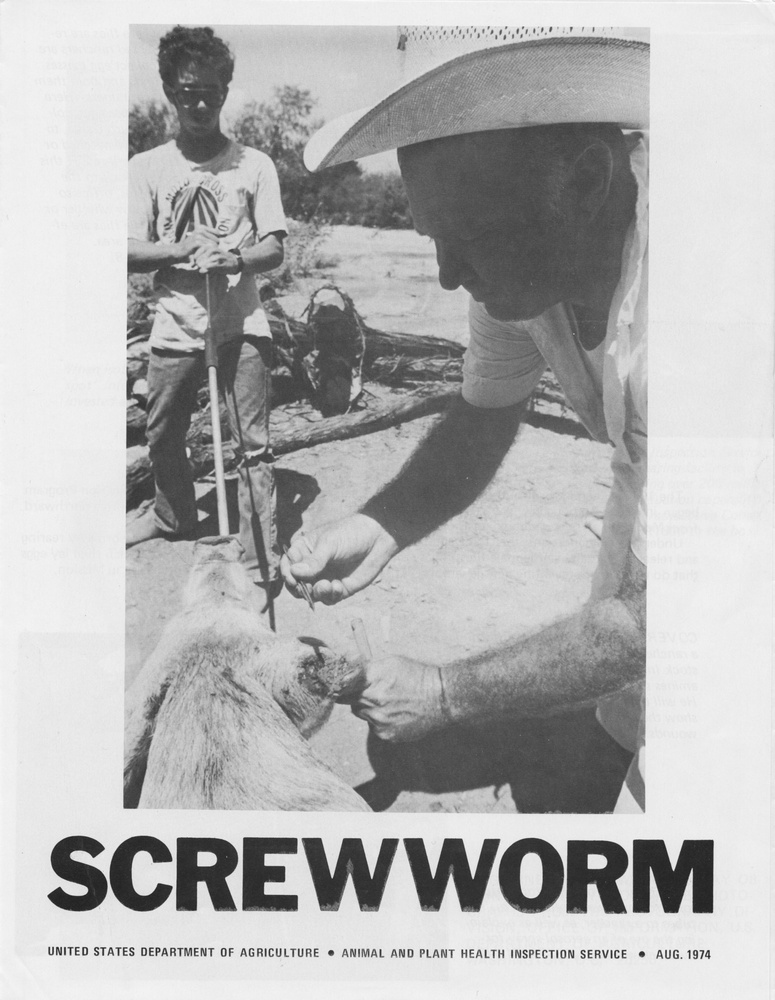 The outbreak spurred U.S. Secretary of Agriculture Earl Butz and Mexican Secretary of Agriculture Manuel Bernardo Aguirre to sign an international agreement on August 28, 1972, establishing a joint Mexico-United States Screwworm Eradication Commission. The agreement called for screwworm eradication in a much larger portion of Mexico than previously planned and moved the barrier zone from the United States-Mexican border, which was hundreds of miles wide and deep, to the narrowest point in Mexico ”the Isthmus of Tehuantepec at the 93rd meridian. 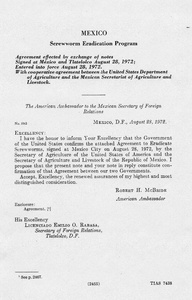 Screwworm Eradication Program: Agreement Between the United States of America and Mexico 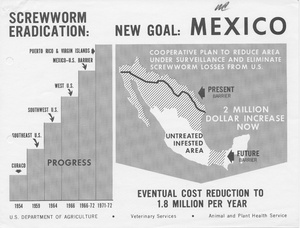 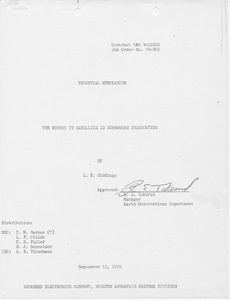 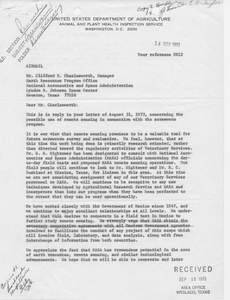 As early as 1973, USDA scientists proposed the idea of using satellite remote sensing as a way to track screwworm habitats. Eradication officials used satellites to measure climate on a daily basis so they would be aware of areas with unusually warm weather or higher rainfall. Satellites such as the Nimbus IV provided climate information that gave fly release planners another way of identifying potential outbreak sites. 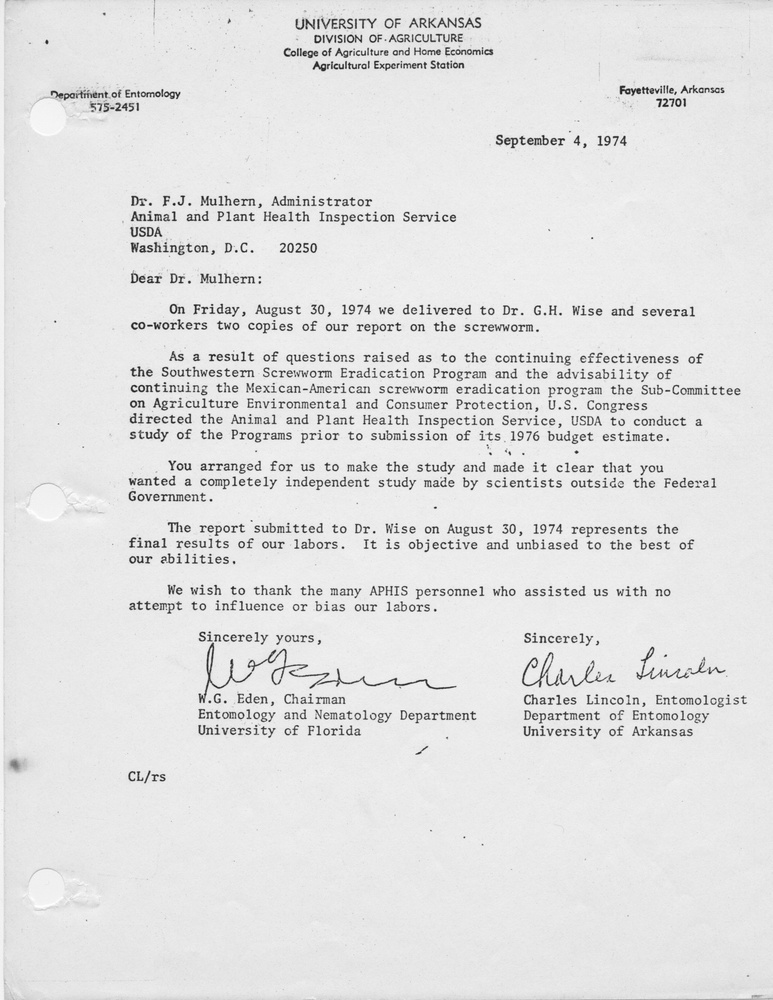 The setbacks experienced by the screwworm eradication program raised the issue of whether the program had a reasonable chance of long-term success. In 1974, an independent study by two university entomologists, W.G. Eden and Charles Lincoln, reassured Congress that the program's accomplishments were substantial and that discontinuance would harm American livestock producers. 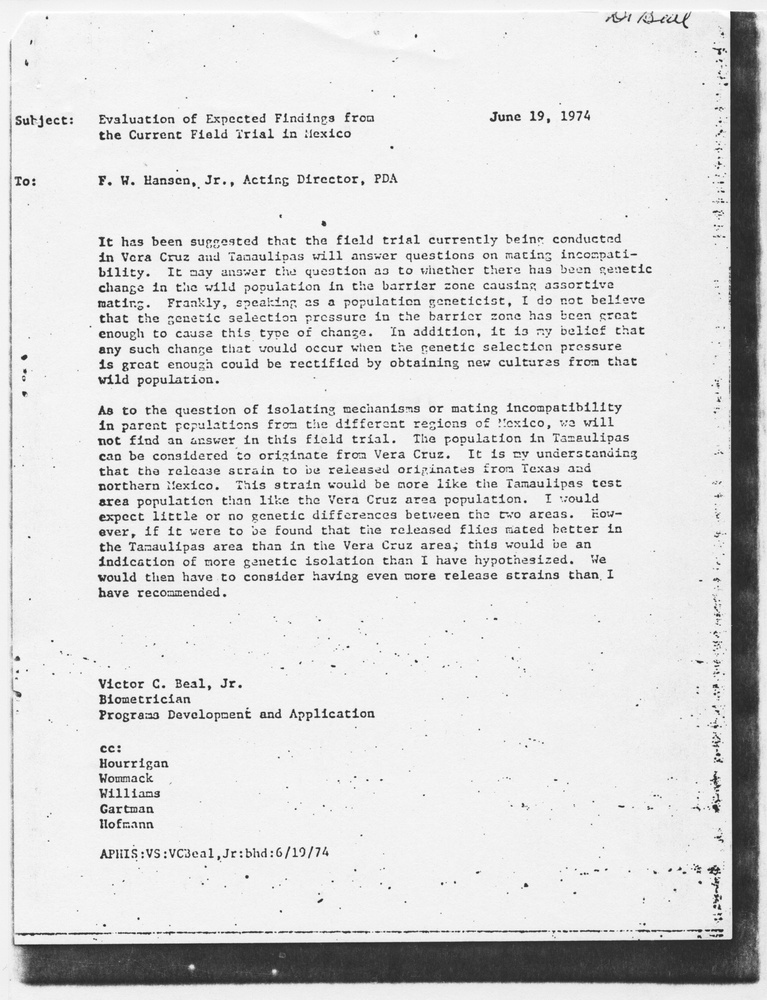 A key issue for ARS researchers was the perceived failure of laboratory-reared flies to mate successfully with wild fertile flies. Some scientists viewed this alleged lack of compatibility as responsible for the slower pace of eradication in the Southwest. Some suggested that any incompatibility between wild and lab flies was due to the development of incompatible subspecies. The scientists recognized that different areas of the United States and Mexico supported different strains of screwworm flies. USDA researchers and production staff continued to develop fly strains they hoped would be most compatible with those in the treatment areas. The question of mating compatibility spurred more intensive genetic research.

At 200 million flies a week the Mission, Texas, plant was operating at full capacity. From 1962 to 1975, USDA released more than 96 trillion sterile flies in the Southwest, Southeast, Mexico, and Puerto Rico. In order to produce enough sterile male flies to be released in Mexico, a new plant had to be established there. In 1974, work began on a new facility near Tuxtla Gutierrez, Chiapas, Mexico. 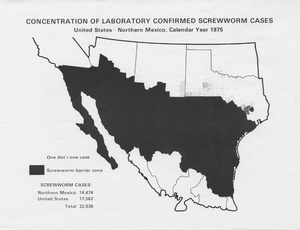 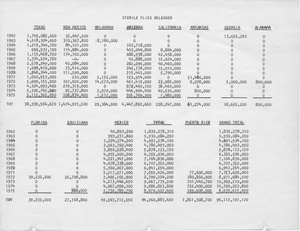 In 1974, ARS entomologist Alfred H. Baumhover visited Puerto Rico to evaluate the progress of eradication there. Eradication was complete on the smaller islands of Puerto Rico and in the U.S. and British Virgin Islands. The only remaining infestations that year were on the main island of Puerto Rico. 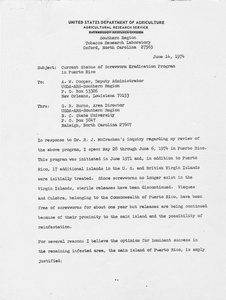 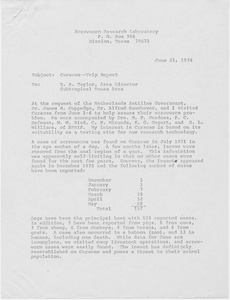 Curaçao became reinfested in 1975, an outbreak scientists attributed to the importation of infested cattle from South America. The following year, Curaçao's screwworms were again eradicated by the application of USDA's newest control technology.