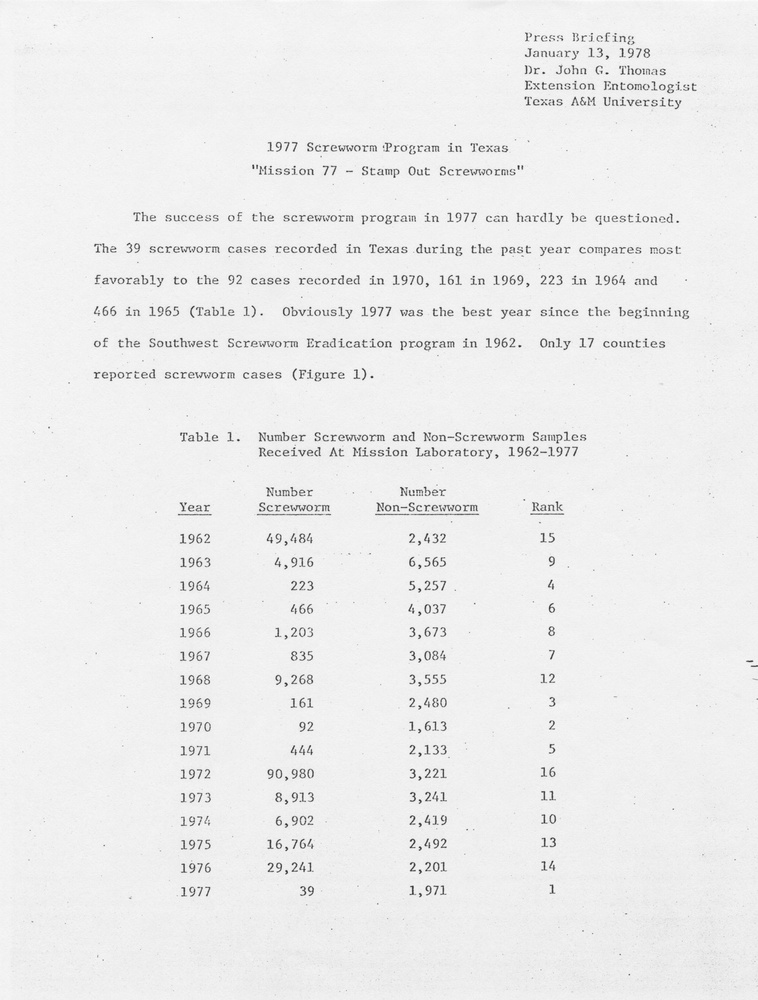 The Mexico-United States Commission achieved great success in 1977 with their "Mission '77: Stamp Out Screwworms" campaign. In Texas there were only 39 confirmed cases of screwworms that year, compared to 90,000 in 1972. Major factors contributing to the success included the introduction of new fly strain "009"; reduced radiation dosages for sterilization, which resulted in more active adult flies; denser coverage of target areas; increased fly production; the cold, wet winter of 1976-1977 and hot, dry summer of 1977; and increased producer interest and participation.

The success of the Mission '77 campaign can be attributed in large part to the public information campaign. Through brochures, bumper stickers, pins, and posters, eradication efforts became much more visible throughout the Southwest and northern Mexico. 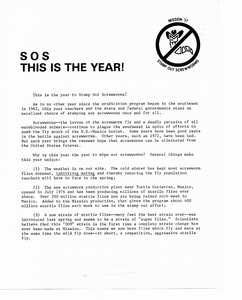 SOS: This Is The Year 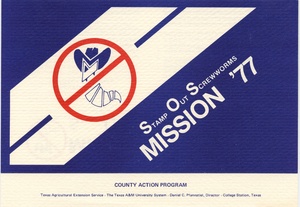 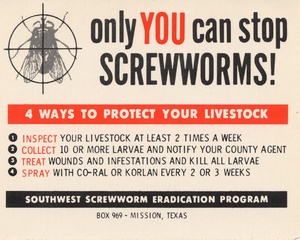 Only You Can Stop Screwworms

Shopping in Mexico? Even One Can Hurt 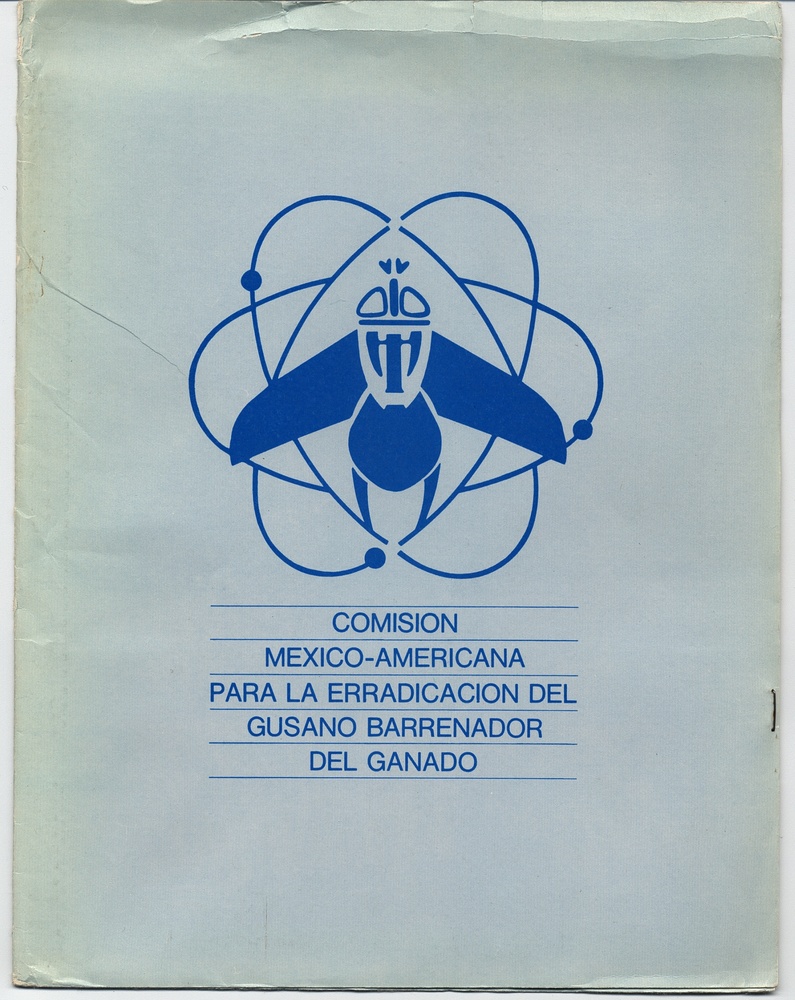 The Commission distributed educational materials, which included information on the identification of the screwworm, the screwworm life cycle, where to report screwworm cases, and how to treat wounds. The stylized screwworm fly superimposed on a diagram of an atom (on the CD label) became the symbol of the Commission and the eradication effort in Mexico and the rest of Central America.

Heightened Spirit of Cooperation Between the United States and Mexico A memorandum of understanding was drawn up between the Comision Mexico-Americana Para La Erradicacion Del Gusano Barrenador Del Ganado (Mexico-America Commission for the Eradication of the Screwworm) and USDA's Agricultural Research Service (ARS). The memorandum provided for the sharing of facilities, personnel, and fiscal responsibilities, and provided for additional ARS research in screwworm eradication. 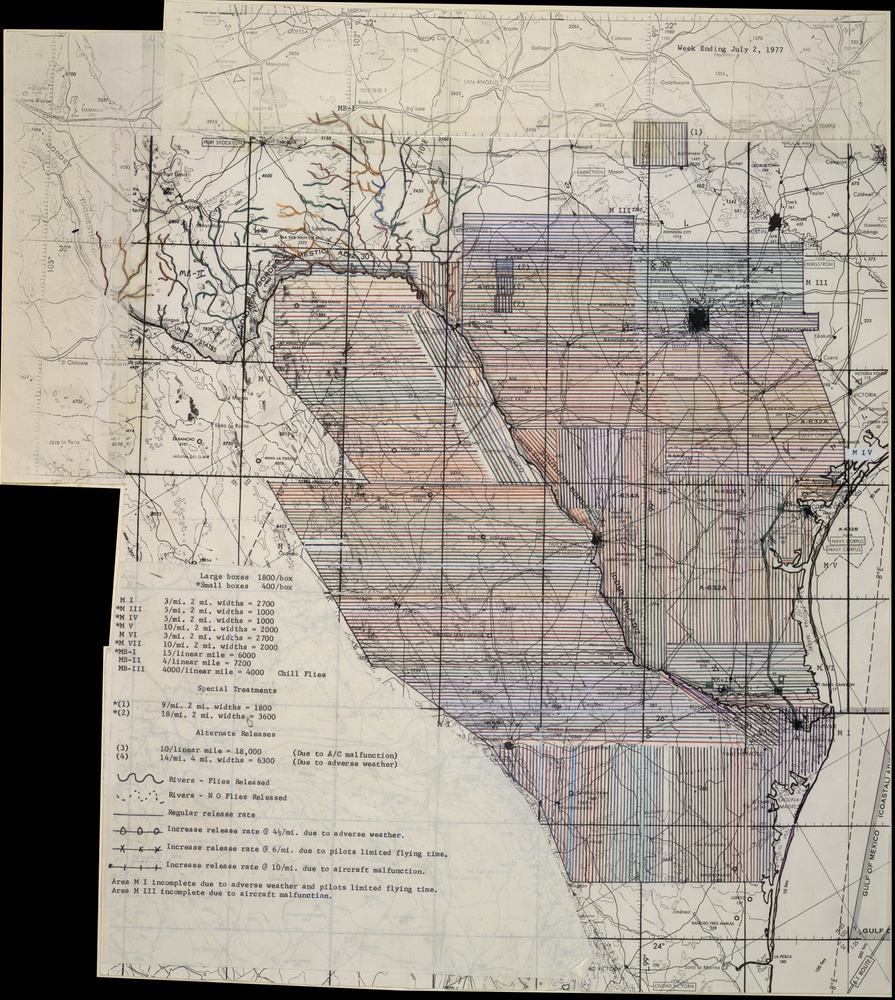 Scientists calculated fly release zones to provide the most efficient coverage. Each release area had specific flight lanes, swath widths, fly quantities, and flight patterns. The map of fly releases along the Rio Grande for the week ending July 2, 1977, reveals the care that researchers used.

Research and Development: Building on Past Success By 1979, the Mission, Texas, and Tuxtla Gutierrez, Mexico, plants were in steady production. Improvements were made in fly production, fly strain development, and measurement methods for fertile flies.

Maps of infested areas from 1962 to 1979 illustrate the fluctuation of screwworm outbreaks in the Southwest. 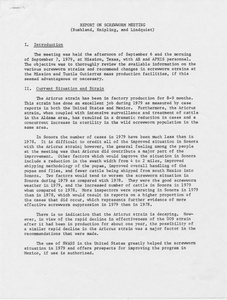 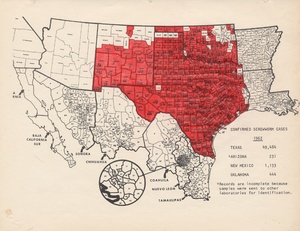 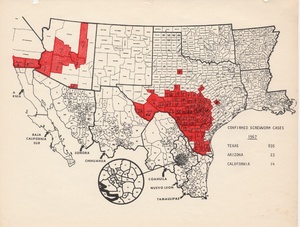 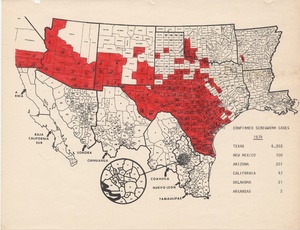 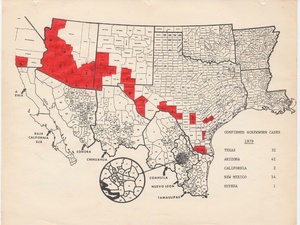