Letters and other papers of Humphry Marshall, of Bradford Township, Chester County, Pennsylvania. Marshall was a botanist and plant dealer, and author of Arbustum Americanum: The American Grove, 1785, (French translation: Catalogue alphabetique des arbres et arbrisseaux, 1788). He was a Quaker, and a cousin of botanist John Bartram (1699-1777).

These are all letters received by Marshall, concerned with orders for trees, shrubs and seeds, and the publication of his work. One of the main correspondents in this collection is British botanist and explorer Sir Joseph Banks (1743-1820), president of the Royal Society, London, and honorary director of the Royal Botanic Gardens, Kew. Others include Dr. Thomas Parke (1749-1835), George Pennock, Samuel Vaughan, and William Vaughan. Several of the letters include detailed lists of plants requested. A few are addressed to Moses Marshall (1758-1813), Humphry's nephew and his assistant in the later years of his life. Included with the collection is an undated broadside, "Some Account of the Naked or Siberian Barley."

Marshall was a botanist and plant dealer from Bradford Township, Chester County, Pennsylvania. Included with images of the manuscript material are scans of pages from Marshall's Arbustum Americanum and William Darlington's Memorials of John Bartram and Humphry Marshall. The pages from Darlington's book provide transcriptions for some of Marshall's letters.

Notes on Names and Spellings 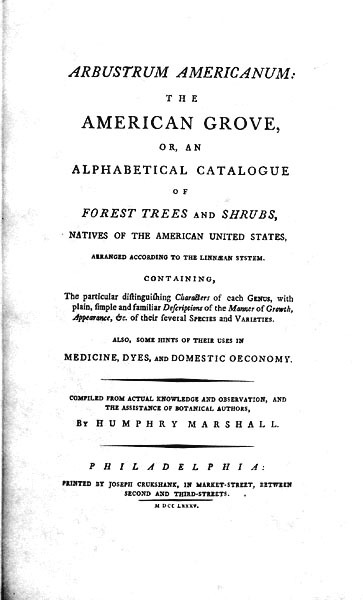 Marshall's first name is sometimes spelled "Humphrey" in reference books, and even by his correspondents. But examples of his signature, as well as the title page of his book, show "Humphry" as the correct form.

The full title of Marshall's major publication is Arbustum Americanum: The American Grove, or, An Alphabetical Catalogue of Forest Trees and Shrubs, Natives of the American United States, arranged according to the Linnaean system. However, a typographical error on the title page of the first edition gives the first word as "Arbustrum" and this spelling is still often found in citations of the work. (See, for example, Webster's Biographical Dictionary, 1976).

"Arbustum" is Latin, meaning a place where trees are planted, a grove, orchard, or plantation; there is no such word in Latin as "arbustrum."

One of Marshall's correspondents in this collection appeared at first to be named James Vaughan. The manuscript dealer had written "James" in pencil next to the signature on one of the letters, and another hand had written "James Vaughan" in ink on the address portion of two others. However, several of these letters were printed in Darlington's Memorials, where the writer is identified as Samuel Vaughan. From this and other evidence it is clear that Samuel was the correspondent's name. Vaughan was an English planter from Jamaica, and friend of Benjamin Franklin. He lived in Philadelphia for a number of years, and was instrumental in arranging for publication of Arbustum Americanum.

The letters are arranged alphabetically by writer, and then chronologically. The broadside is filed after the letters. A list describing each item is given below.

A number of these letters were printed in William Darlington's double biography, Memorials of John Bartram and Humphry Marshall. Letters that appear in that book are marked with the note "Darlington, p. ___." Page numbers refer to the first edition (Philadelphia: Lindsay & Blakiston, 1849).

These letters were found in a brown paper wrapper with a label from the Franklin Bookshop, S. N. Rhoads, 920 Walnut Street, Philadelphia, Pa., addressed to Mr. [sic] C. R. Barnett, (i.e., Claribel R. Barnett), Librarian, U.S. Dept. of Agriculture, Washington, D.C. A note on the wrapper gives the total value as $90. Pencil notations on many of the items, which include the price of certain pieces, were probably added by the manuscript dealer. The wrapper has been saved and filed separately in box 10/6, folder 3. 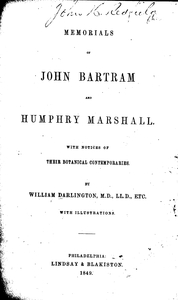 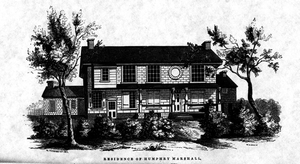 An illustration of Humphry Marshall's home in Bradford Township, Pennsylvania. 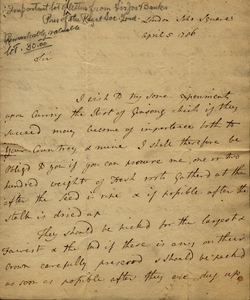 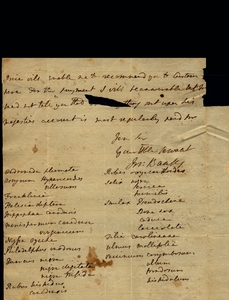 Sir Joseph Banks to Humphry Marshall, February 6, 1788, an order for plants for "Kew Garden, his Majesties [sic] Botanic Institution." In two pieces; top of letter is torn off with the back leaf missing. 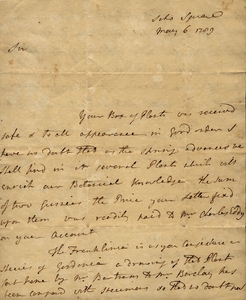 Sir Joseph Banks to Humphry Marshall, May 6, 1789, acknowledging the receipt of a box of plants and placing a request for some more for his Majesty's garden. 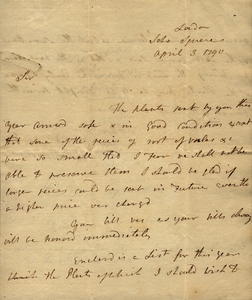 Sir Joseph Banks to Humphry Marshall, April 3, 1790, acknowledging receipt of plants and an order for more. 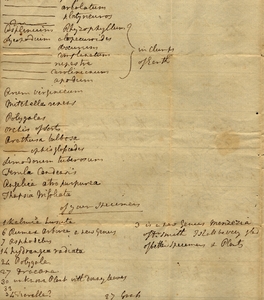 Sir Joseph Banks to Moses Marshall, 1792, acknowledging receipt of order and the placement of another. 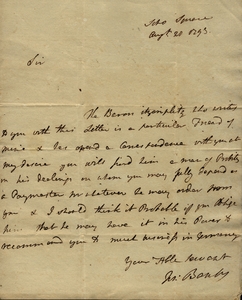 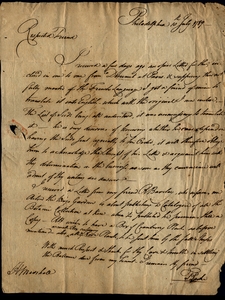 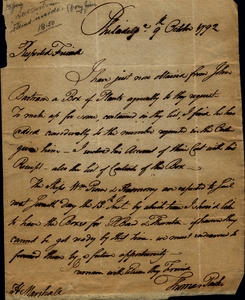 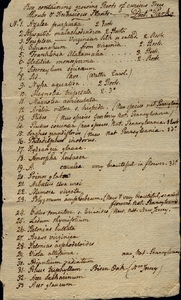 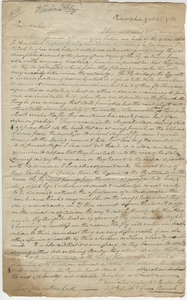 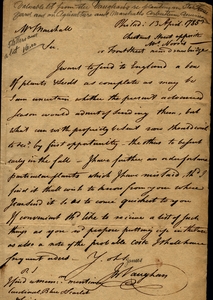 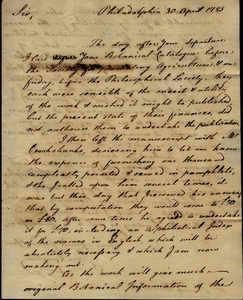 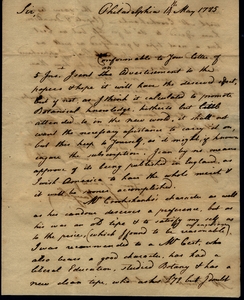 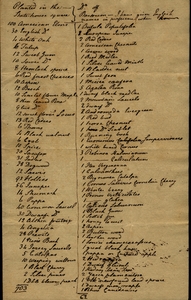 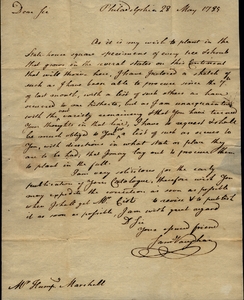 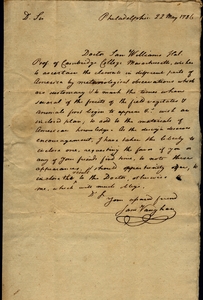 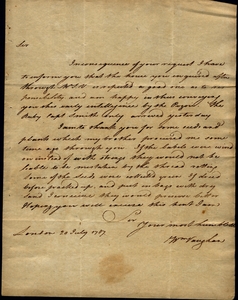 Marshall letter, July 20, 1787
William Vaughan to Humphry Marshall, July 20, 1787. William was brother of Samuel Vaughan. In this letter, he thanks Marshall for an order of seeds… 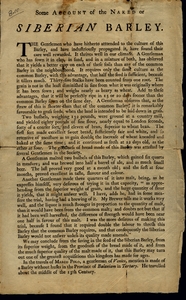