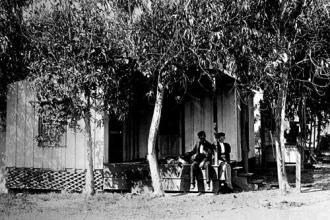 Ideas and definitions relating to the term rural are diverse. The federal government classifies areas and population for statistical, programming, and funding purposes. When applying for grants and funding or conducting research one should refer to the rural definition provided by the agency or organization.

The Census Bureau defines rural as "any population, housing, or territory NOT  in an urban area .  Its definition of rural is closely tied to its urban definition. There are two types of urban areas:

This undated image from the Beverly Thomas Galloway Papers in the NAL's Special Collections shows a family in front of a house and is titled Resting at Laguna Beach, California, after ten years of hard work.