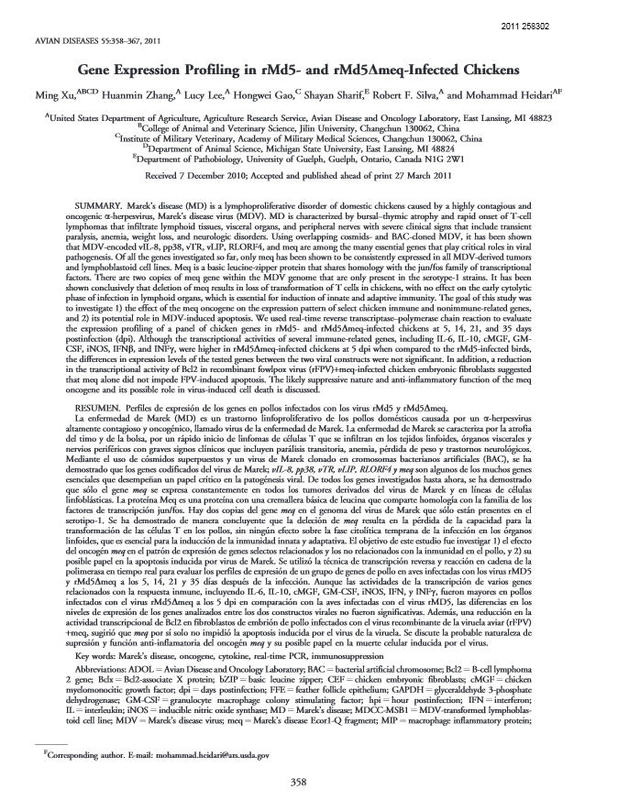 Marek’s disease (MD) is a lymphoproliferative disorder of domestic chickens caused by a highly contagious and oncogenic α-herpesvirus, Marek’s disease virus (MDV). MD is characterized by bursal–thymic atrophy and rapid onset of T-cell lymphomas that infiltrate lymphoid tissues, visceral organs, and peripheral nerves with severe clinical signs that include transient paralysis, anemia, weight loss, and neurologic disorders. Using overlapping cosmids- and BAC-cloned MDV, it has been shown that MDV-encoded vIL-8, pp38, vTR, vLIP, RLORF4, and meq are among the many essential genes that play critical roles in viral pathogenesis. Of all the genes investigated so far, only meq has been shown to be consistently expressed in all MDV-derived tumors and lymphoblastoid cell lines. Meq is a basic leucine-zipper protein that shares homology with the jun/fos family of transcriptional factors. There are two copies of meq gene within the MDV genome that are only present in the serotype-1 strains. It has been shown conclusively that deletion of meq results in loss of transformation of T cells in chickens, with no effect on the early cytolytic phase of infection in lymphoid organs, which is essential for induction of innate and adaptive immunity. The goal of this study was to investigate 1) the effect of the meq oncogene on the expression pattern of select chicken immune and nonimmune-related genes, and 2) its potential role in MDV-induced apoptosis. We used real-time reverse transcriptase–polymerase chain reaction to evaluate the expression profiling of a panel of chicken genes in rMd5- and rMd5Δmeq-infected chickens at 5, 14, 21, and 35 days postinfection (dpi). Although the transcriptional activities of several immune-related genes, including IL-6, IL-10, cMGF, GM-CSF, iNOS, IFNβ, and INFγ, were higher in rMd5Δmeq-infected chickens at 5 dpi when compared to the rMd5-infected birds, the differences in expression levels of the tested genes between the two viral constructs were not significant. In addition, a reduction in the transcriptional activity of Bcl2 in recombinant fowlpox virus (rFPV)+meq-infected chicken embryonic fibroblasts suggested that meq alone did not impede FPV-induced apoptosis. The likely suppressive nature and anti-inflammatory function of the meq oncogene and its possible role in virus-induced cell death is discussed.