While many titles are represented over a span of years, some items were not collected regularly, so only a few issues may be found in this collection.

Newsletters published by USDA agencies. Included are copies of divisional newsletters such as BAE News from the Bureau of Agricultural Economics, and publications of employee organizations, such as OPEDA News, put out by the Organization of Professional Employees of the U.S. Department of Agriculture. Other titles of interest include Ag Reporter (1964-1990, and scattered earlier issues), dealing with activities and general interest items for employees; Black Unity (1972-1975), a publication for African Americans within the department; and Digest of Congressional Proceedings of Interest to the Department of Agriculture, a brief, daily summary of activities in the U.S. House and Senate (1942-1982).

Files of the official departmental newsletter USDA News (formerly USDA) include an almost complete run of the newsletter beginning with its first issue in 1942. In addition to copies of the newsletter, there are administrative and editorial records from 1979-1984, including budget materials, correspondence, memoranda, production files, and responses to a survey. There are also "agency fact sheets," included as inserts in several issues, 1983-1984, which summarize the history and functions of many of the Department's principal agencies.

Newsletters published by national farmers' groups and other agriculture-related organizations, including the American Farm Bureau Federation (AFBF), National Farmers Union (NFU), the National Grange, and state and local groups. There are long runs of Farm Bureau News (1952-1991) published by the AFBF, and the National Farmers Union's Washington Newsletter (1954-1989). There are scattered issues of newsletters from some of the state branches of the NFU, including Iowa Union Farmer, Kansas Union Farmer, and Minnesota Agriculture.

Of note are several publications based in Washington, D.C. that specialize in reporting on the activities of Congress, USDA, and other agriculture-related agencies. Among these are Spade (1942-1945), View From the Hill (1976-1994), Washington Agricultural Record (1973-1993), and Washington Farmletter, also known as Wayne Darrow's Washington Farmletter (1943-1986).

Agricultural cooperatives, corporations, and industrial associations are represent by issues of American Meat Institute Bulletin (1942-1949), News for Dairy Co-ops (1982-1989), and Swift's Dairy and Poultry News (1947-1950). Defense Production Record was a newsletter put out by the National Production Authority, Department of Commerce, dealing with controls on production of agricultural and industrial materials during the Korean War period. 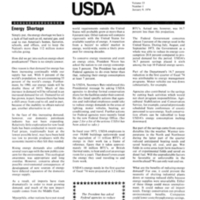 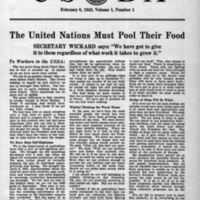 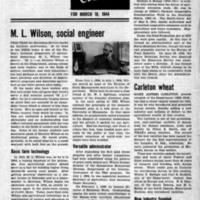 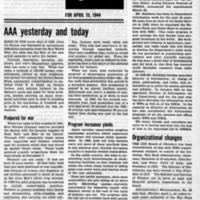 Front page of USDA dated April 15, 1944 tells the history of the Agricultural Adjustment Administration (AAA) beginning with its inception in 1933. Due to wartime restrictions on paper and printing supplies, photographs were eliminated from USDA for… 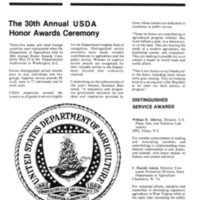 Front page of USDA dated May 26, 1976, with an article on the 30th Annual USDA Honor Awards Ceremony, which honors those who have made notable contributions to both agriculture and public service, or given extraordinary service to the Department… 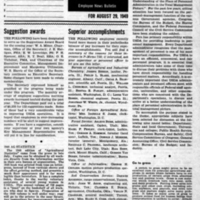 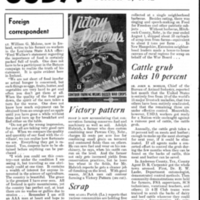 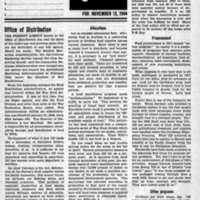 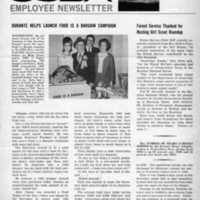 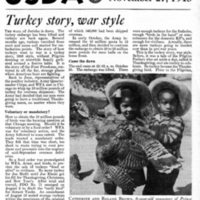 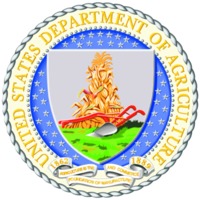 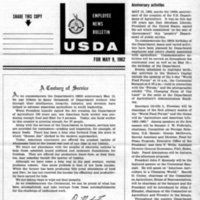 This issue celebrates the 100th anniversary of the founding of the United States Department of Agriculture. President Abraham Lincoln signed the Act creating the Department on May 15, 1862.