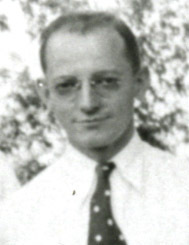 John Scott Andrews was born near Indianapolis, Indiana in 1905. He earned a B.S. in zoology and M.S. in parasitology at Purdue University. After graduating in 1930, he began work for the Zoological Division, Bureau of Animal Industry (BAI) and was assigned to the sheep parasite project.

By June 1938, Andrews earned a doctorate in helminthology at Johns Hopkins University School of Hygiene and Public Health. He resigned from the Zoological Division later that year to become a parasitologist at the Puerto Rico Agricultural Experiment Station in Rio Pedras, Puerto Rico. His research there focused on the internal parasites of dairy cattle.

Andrews returned to the Zoological Division in 1941 when he was appointed parasitologist in charge of the Swine Parasite Laboratory at the Coastal Plain Experiment Station in Tifton, Georgia. He spent the next 12 years working on control measures designed to prevent internal parasite infections in hogs. He relocated to Beltsville, Maryland in September 1953 where he researched atrophic rhinitis in swine and trichinosis. He became head of the Division’s helminthologial investigations in 1956. Andrews retired from government service at the end of July 1975.