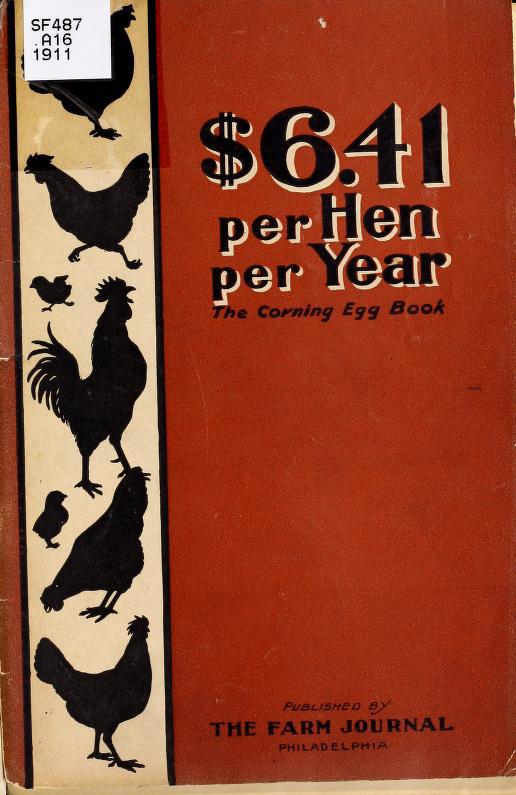 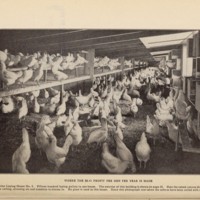 $6.41 Per Hen Per Year: The Corning Egg-Book
Illustrating the Poultry Methods Originated By The Late Prof. G. M. Gowell, of Maine, and Perfected by Edward and Gardner Corning
Revised Edition for 1911-12

"Here everything but an egg is a by-product."

These words of Edward Corning hold the secret of the great success of the Corning egg farm. That little farm, with its immense product of "fancy" eggs, is a capital illustration of the great possibilities of specialization when applied to poultry products. The great demand in large cities for a year-round supply of the finest eggs, even at fancy prices, makes their wholesale production very profitable ; and the success of the Comings at Sunny Slope Farm will be an inspiration to many of both sexes, old and young, who want to engage in a safe and profitable business, and who will find in this little book a guide to almost certain success.

But the Corning Egg-Book appeals also to a class of people far outnumbering those who raise eggs to sell; that is, to the millions who wish to raise them for their own use. This book makes it possible for even families living in cities to produce for their own table a daily supply of fresh eggs, in January as well as June. Experience has proved that a few hens can be kept in the smallest back-yard ; and thousands of women can bear testimony to the value of a sure supply of even three eggs a day, in "bare seasons" like that of late winter, or where invalids require eggs of a quality not to be found in market-houses or stores.

With the present strong and growing desire of city dwellers to get "back to the land," the subject of egg raising becomes more and more important.

As city and suburban dwellers generally come to realize the ease with which the raising of eggs for the home table may be accomplished, it will no doubt be taken up by thousands of people who at present would no more think of keeping hens than of keeping cows or horses. To such egg raisers the Corning Egg- Book is invaluable, for it gives formulas for the best feed and full directions for the care of fowls, which are just as safe and certain with twenty hens as with two thousand. Moreover, the buildings used and described by the Comings can be duplicated in sections as small as may be necessary for the space available. To the city family with a back-yard only twenty feet square, who have never dreamed it possible for them to keep chickens, this suggestion may open a new field of business, as well as a new source of food supply.

Probably no book on poultry subjects has ever had such instant success as this one. Of the first issue nearly one hundred thousand copies were sold in six months. It stirred up comment and discussion in all parts of the country. The Corning egg farm was so novel in its methods and results that to many its story seemed incredible, but it has stood the test of time, as well as that of inspection and criticism. The farm has now had another year of experience which fully answers the expectations raised by the book ; and this new edition, revised and brought up to date, is issued in the confident belief that it will prove one of the most widely useful books ever printed. When Edward and Gardner Corning, whose chronicles of success in egg raising are recorded in this little book, had decided that poultry offered the means of a good livelihood, they began to study all the literature they could find on the subject. They were soon impressed with the wonderful amount of common sense and wisdom contained in the writings of Professor Gowell, of the Maine Experiment Station. Edition after edition of his writings had been printed and almost as quickly exhausted. The Comings secured all that he has written and studied it diligently and to a good purpose.

Their methods of work, their theories of profitable poultry raising are all here set forth, plainly and clearly. Their success will be an inspiration to every poultry raiser the country over. What they have done with a large flock can be accomplished with a few hens — the same principles apply.

When Prof. Gilbert M. Gowell's sudden death was announced (May 6, 1908), the poultry world sustained an irreparable loss. He gave more than twenty years of his life to the service of the University of Maine, during which time he won a reputation which made his work regarded by the United States Department of Agriculture as the most important ever carried on in this country in poultry experiments.

Professor Gowell taught the poultry world better egg production, and poultry husbandry has greatly profited by his unceasing and persistent efforts in that direction. Editor.