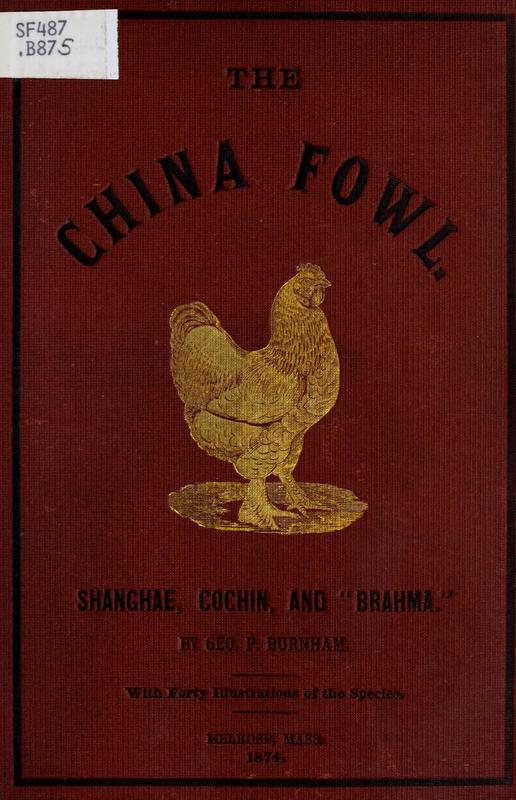 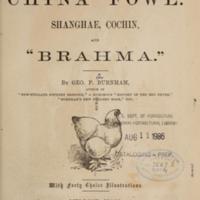 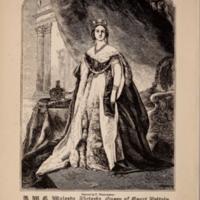 This volume is written with two specific purposes in view: first, to give a brief and succinct account, as far as the record permits, of the introduction into America of the Chinese varieties of domestic fowls, subsequently to the appearance of this notable race of poultry in England (in 1843-44) ; and secondly, to correct the numerous errors and false theories that have obtained, both in this country and in Great Britain, touching the origin and establishment of the most noted of modern gallinaceous breeds, first known on both sides of the Atlantic, as the reliable records show, to wit, the " Gray Shanghaes; " or, as they are latterly denominated by common consent, the Light and Dark " Brahma" fowls.

That these latter-mentioned birds descend direct from the Chinese, and not from any India race, is perfectly clear; since, as W. B. Tegetmeier, F.Z.S., correctly stated in 1853, "there is not a particle of evidence to show that (what is now called) the Brahma fowls ever came from India," And Mr. Tegetmeier truthfully added also at that early day, that " they originated not in India, but in America."

Lewis Wright of London, however, who has contributed no inconsiderable amount of interesting matter to the poultry literature of modern times, most singularly and ignorantly persists, in his later volumes, upon the idea that the Brahmas are of East India origin; and that the account given by Mr. Virgil Cornish, of an early pair of large gray fowls having been "imported into New York from Luckipoor, up the Brahmapootra River," furnishes the correct theory as to the origin of this variety.

This silly sailor-Cornish-Chamberlin story (which for a time was believed in by some person), upon which Lewis "Wright of England bases his utterly groundless notions, was many years ago absolutely exploded. Mr. Cornish first wrote (March 2, 1852,) that he procured his stock of Mr. Chamberlin of Connecticut, who was said through "a sailor" to have chanced upon "a pair of large, light-gray fowls, which said Chamberlin first brought into the State of Connecticut, from somewhere, in the early part of the year 1849." Upwards of sixteen years after this original account of Cornish had been published, this same authority, oyer his own signature, in a second letter, to a Mr. We;d, just as clearly states that this very Chamberlin "pair of gray fowls arrived at New York on board a ship from Luckipoor in India, in September, 1846;" of which two statements, Mr. Plaisted, in 1874, declares "there is nothing accurate in the first, and the last one is still worse! "

And this is all the evidence the world has ever had about the introduction of this remarkable pair of Chamberlin gray birds, " imported from India," via New York, into Connecticut, an event which, beyond cavil or dispute, never thus occurred at all ; since the fact is now established, beyond question or refutation, that neither in the year 1849 or 1846 (according to Cornish, Wright, et als., or in 1847, as a later writer has it) did there arrive at New York any ship or other vessel "from the port of Luckipoor in India;" as will be clearly demonstrated in the succeeding pages of this work

At the same time, I shall endeavor to plainly show, herein, from the long-since-printed testimony and records, that the large light "Gray Shanghaes" bred by the undersigned for many years after 1849, were from China stock; and that from these (imported by me in 1849- '50 from Shanghae) came the originals of the now famous so-called " Brahmas."

I am indebted to Messrs. Lee & Shepard, publishers of Boston ; to Jos. M. Wade, Esq., of "Fanciers' Journal," Philadelphia, Penn. ; to H. H. Stoddard, Esq., of "Poultry World," Hartford, Conn.; T. S. Cooper, Esq., of Coopersburg, Penn.; Philander Williams, Esq., of Taunton, Mass. ; Dr. Kenegy of "Polo Argus," 111. ; T. T. Bacheller, Esq., of " N. W. Poultry Journal," Minneapolis ; W. H. Todd, Esq., Vermillion, O. ; and other gentlemen — for some of the fine illustrations in this work. And to these and various publicly unnamed friends, I hereby tender my acknowledgments for hints and suggestions that are embodied in my present book, which is now presented to the fanciers of America as a truthful and explicit account of what the author knows regarding the origin, history, characteristics, and breeding qualities of the China Fowl, — Shanghae, Cochin, and Brahma, — from 1844 to 1874 inclusive; accompanied with corroborative authority for the statements I now make, gathered from the most reliable data I have been able to reach or make myself acquainted with, during the thirty years I have enjoyed so large a practical experience with all the varieties of this now universally favorite race of Chinese fowls.