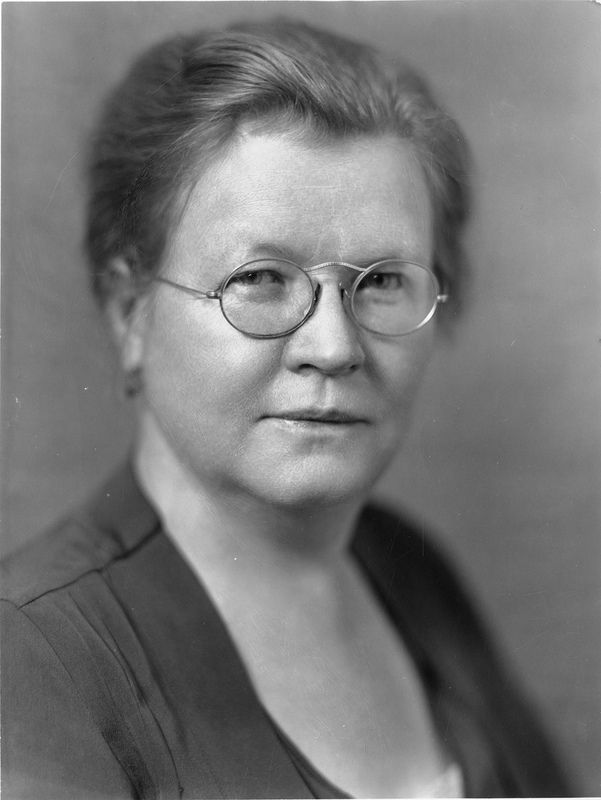 Louise Stanley was chosen to become the new Chief of this Bureau. She held a doctorate in chemistry from Yale University and was previously a Professor of Home Economics and Department Chair of the University of Missouri. She held the position of Chief until 1943.

Stanley published various reports and bulletins prior to and also while running the Bureau. Here are several of her most prominent publications: 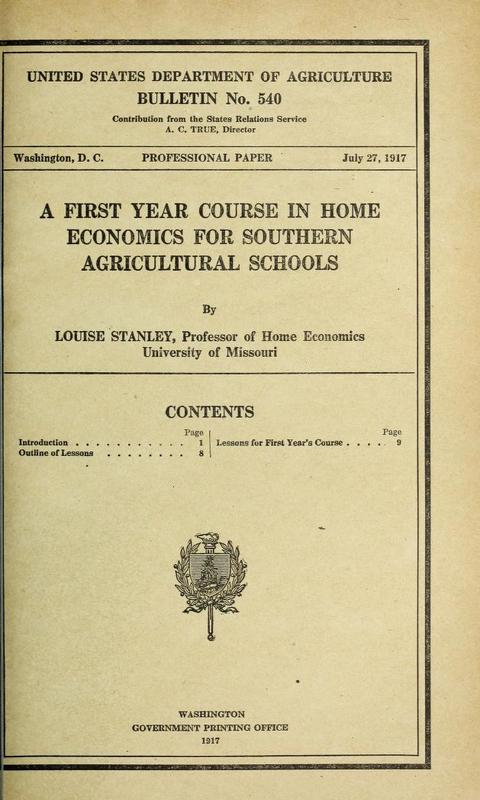 "This bulletin outlines a course of study in home economics for southern high schools. It emphasizes the connection between such instruction and actual home experience and the danger arising from formal methods of presentation. It calls attention to underlying general principles and applies them in a typical course of study, which, while based on southern conditions, is applicable in other communities.

The aim of any course in home economics is to make the girl a better home maker. By teaching her how to do, and the reasons why, and as well by giving insight into the fundamental importance of home making such instruction transforms housework from drudgery into an honored profession. In the average home two industries stand out — sewing and cooking — and there has been a tendency to limit home economics instruction to them. If interpreted broadly to include their economic and hygienic relations, cooking and sewing do furnish the basis of a well-rounded course; but they should be supplemented by other subjects necessary for the home maker. Knowledge of the homes of her community will best assure to the teacher suitable subject matter and connect the school work with home duties." 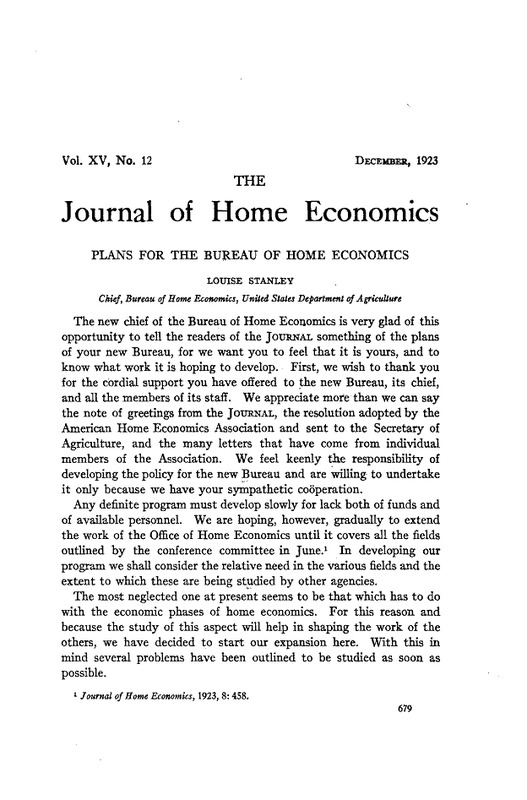 Plans for the Bureau of Home Economics (1923)

"The new chief of the Bureau of Home Economics is very glad of this opportunity to tell the readers of the Journal something of the plans for your new Bureau, for we want you to feel that it is yours, and to know what work it is hoping to develop. First, we wish to thank you for the cordial support you have offered to the new Bureau, its chief, and all the members of its staff. We appreciate more than we can say the note of greetings from the Journal, the resolution adopted by the American Home Economics Association and sent to the Secretary of Agriculture, and the many letters that have come from individual members of the Association. We feel keenly the responsibility of developing the policy for the new Bureau and are willing to undertake it only because we have your sympathetic cooperation." 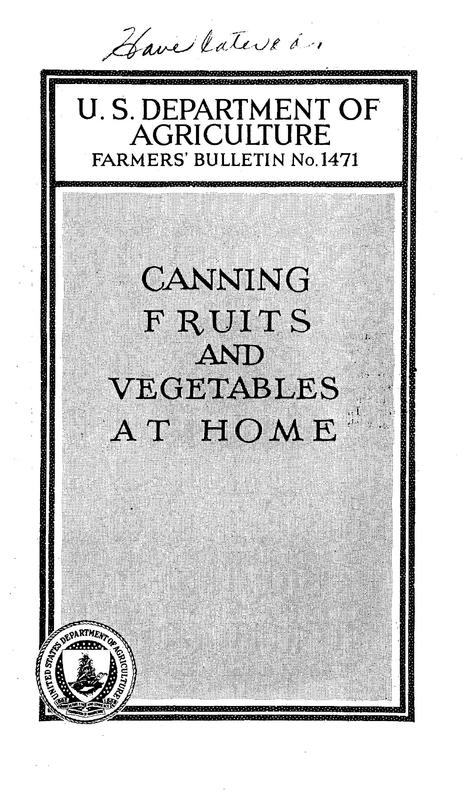 Canning Fruits and Vegetables at Home (1926)

"This bulletin attempts to give in as simple form as possible the application of scientific principles to home canning of fruits and vegetables. Methods of canning are based on knowledge of the causes of food spoilage and ways of preventing it. Scientific research is constantly throwing new light on this subject, and the methods recommended in this bulletin are based on the most reliable information the department has been able to obtain." 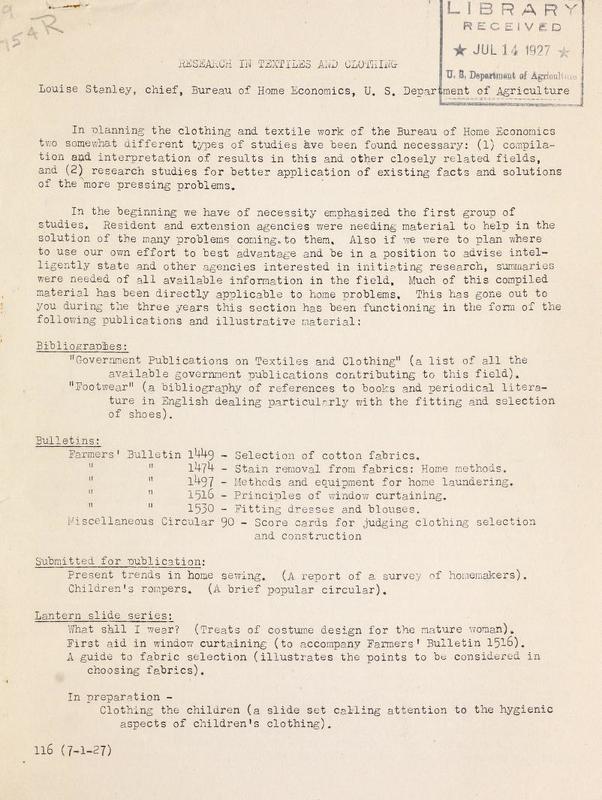 Research in Textiles and Clothing (1927)

"In planning the clothing and textile work of the Bureau of Home Economics two somewhat different types of studies have been found necessary: (1) compilation and interpretation of results in this and other closely related fields, and (2) research studies for better application of existing facts and solutions of the more pressing problems.

In the beginning we have of necessity emphasized the first group of studies. Resident and extension agencies were needing material to help in the solution of the many problems coming to them. Also if we were to plan where to use our own effort to best advantage and be in a position to advise intelligently state and other agencies interested in initiating research, summaries were needed of all available information in the field. Much of this compiled material has been directly applicable to home problems." 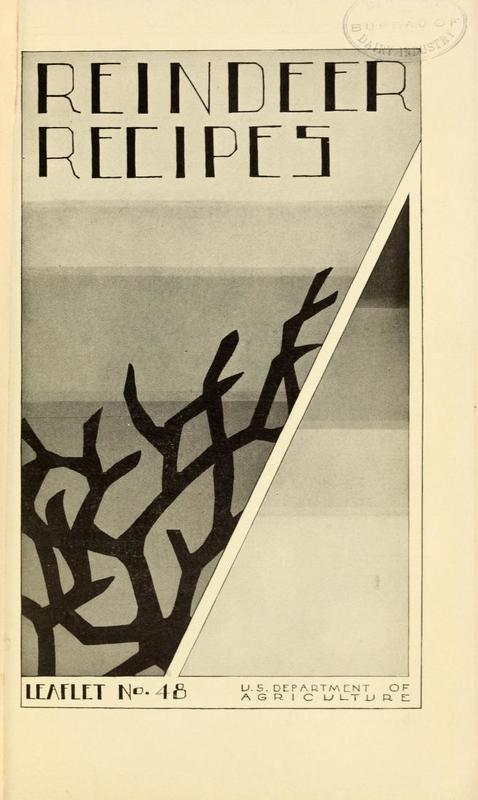 "The reindeer herds of Alaska, introduced by Government agencies to supply food for the natives, have now developed until their keeping is looked upon as the most, practical agricultural industry of Alaska. The Department of Agriculture became interested in it in July, 1920, when the Bureau of Biological Survey was authorised to conduct investigations, and since then studies have been made of various phases of range and herd management, time and method of slaughtering, cold-storage practices in Alaska, and shipment of carcasses. These herds now furnish not only a large proportion of Alaska's meat supply but also increasing quantities for export. Marketed first in the Northwest, then on transcontinental trains and in metropolitan hotels, now, under improved refrigeration facilities and methods of handling, reindeer meat is being more generally distributed, and housewives are asking for information as to its use. In order to advise them intelligently, studies on the best methods of preparation have been undertaken by the Bureau of Home Economics, and the results are here given in the form of recipes.

In proximate composition reindeer meat differs little from beef or veal of the same grade. In general it contains less fat and slightly more protein. Feeding conditions vary so much from those prevailing elsewhere that differences in vitamin and mineral content are to be expected. The flavor is characteristic and different from beef or veal, gamy but not strong. The texture is fine, and most of the meat is tender." 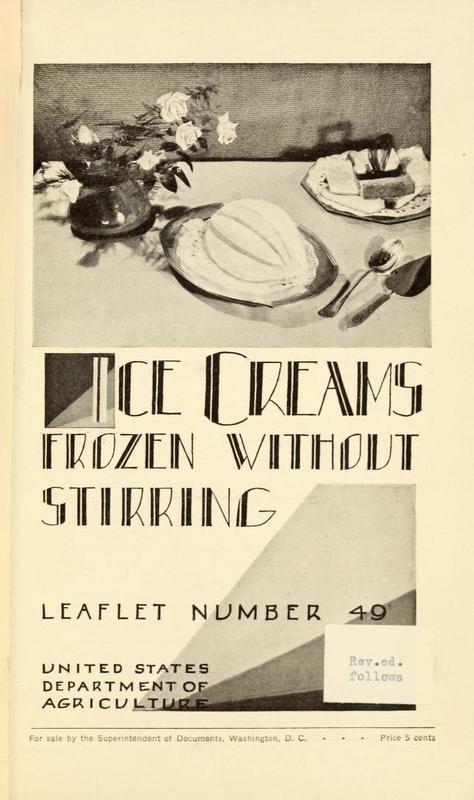 "Satisfactory desserts may be frozen without stirring by packing in ice and salt or by placing in the trays of the mechanical refrigerator. A fairly rich mixture must be used in these desserts and the ingredients carefully combined in order to obtain a satisfactory texture. Such ice creams are never so smooth as those prepared in a freezer with a dasher but are less trouble and, properly prepared, have a flaky, crystalline texture quite characteristic and desirable.

In freezing with a dasher, the knife edge cuts off the crystals as they are formed, and the whipping portion of the dasher beats in the air. In freezing without stirring, the size of the crystals must be controlled by air beaten in in advance, by the fillers in solution, or suspended in colloidal form as the chemist says, and by the rapidity of freezing. Air and fillers get in between the particles of water and prevent mechanically the formation of large crystals. Slow freezing makes larger crystals. Heavy cream is the most satisfactory base for desserts frozen without stirring. Such cream is used in the preparation of mousses and in combination with egg whites in parfaits. These are frozen by packing in ice and salt without stirring or in a mechanical refrigerator, provided the temperature of the unit is sufficiently low, from 21° to 27° F. Heavy cream holds in air when whipped, and the fat is evenly distributed. Both these conditions retard the formation of large crystals. Furthermore the fat becomes more solid at the low temperature, thus adding to the smoothness desirable in these desserts. Heavy cream is expensive, however, and if used alone is too rich to be palatable; so recipes have been developed in which the rich cream is diluted by the addition of evaporated milk and thin cream, or by rich milk thickened with gelatin, eggs, or flour." 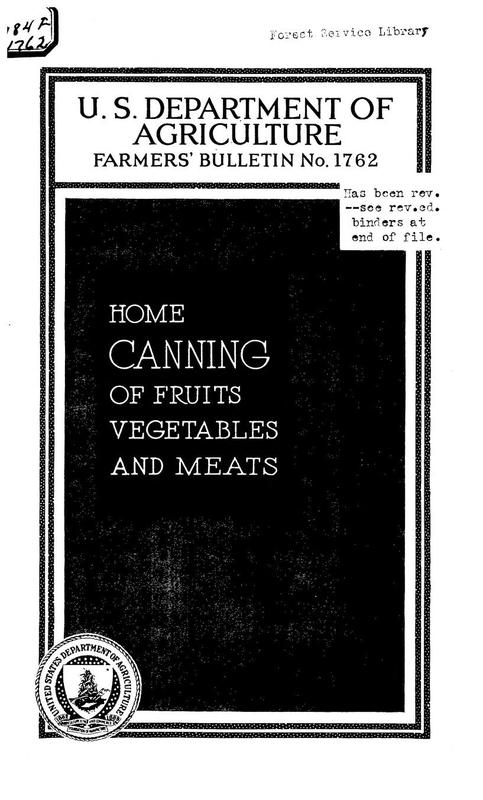 "Canning is a method of using heat and airtight containers to preserve food as nearly as possible in the condition in which it is served when freshly cooked. It is a desirable and economical method of preserving many foods so that their use can be distributed over seasons and to places where they are not available fresh. Canned foods thus make possible a better-balanced and more-varied diet throughout the year.

The method of canning foods affects the vitamin content to some extent. With the possible exception of vitamin C there may be no serious loss during the canning process, though of course when foods are removed from the cans and reheated before serving, there may be additional loss of vitamins. In order to preserve all the vitamins possible in canned products, emphasis is placed throughout this bulletin on canning foods very soon after they are gathered and on carrying every step of the process through rapidly. Precooking foods for a short time, packing them hot, and processing them in the containers help to preserve the vitamin value.

None of the minerals in foods need be lost in canning, providing the liquid in which they are precooked is used to fill up the containers and provided the entire contents of the can is served.

A canning budget prepared at the beginning of the season will indicate what quantities of different canned foods are needed by the family. In making such a budget, consider the number of persons in the family, the length of time that fresh foods are out of season, and what foods are available for canning, as well as the cost of equipment and containers, and the value of the time of the persons doing the work. Assistance in planning a canning budget suitable to the locality and adapted to the nutritional requirements of the family may be obtained from the State college of agriculture."