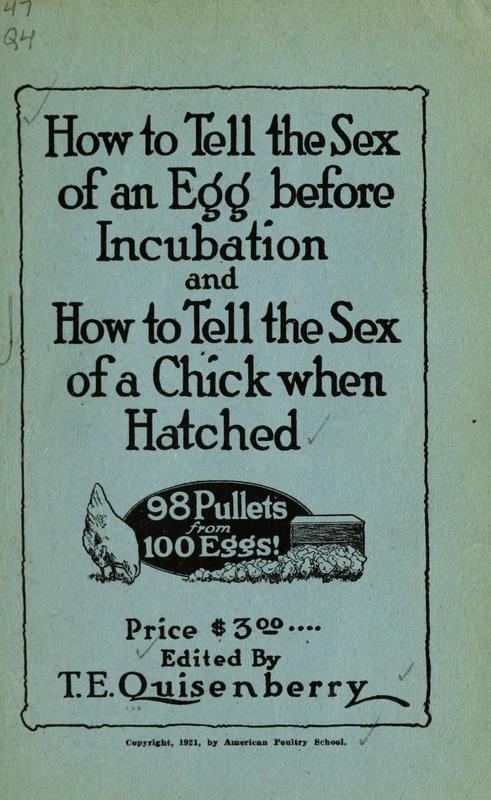 There are many devices and ideas being sold on the market which claim to reveal a method of testing the sex of an egg before incubation, or of a chick as soon as hatched. We have tested practically all of these known methods and have found most of them unreliable.

It is only after testing a method that was discovered by Mrs. Noda Fry, of Missouri, that we felt that there was any dependence to be put in any method of discovering the sex of an egg or of a chick. We tested this method for more than a year, and all the tests that we have made have resulted in our belief that Mrs. Fry's method is really reliable and a great discovery worthy of application and further investigation.

In addition to the tests which we made with Mrs. Fry's method ourselves we might state that while attending a poultry show in Chicago a native Hollander came to the educational booth of this School, and in discussing poultry matters asked us why we did not use the method of determining the sex of an egg as used by his mother "in the old country." He stated that she was able to hatch all pullets or all cockerels, whichever she wanted. He freely volunteered the information that she determined the sex by candling the eggs and by examination of the air-cell, and the facts which he revealed to us coincided exactly with Mrs. Fry's theory. He did not know that we were working along the same line.

In order to really tell just where the air-cell is located in an egg, especially in a thick-shelled, dark brown egg, you should have a good candling device. If you have a good candler with a strong light, the eggs can be tested very rapidly. No expensive equipment is required, no loss of time, no freak stunts or fancies, just the plain use of a scientific fact in a "common-hen-sense" manner. Without using this method, eggs ordinarily hatch about one-half males and one-half females. If you only want a large per cent of pullets this method will enable you to market your cockerel eggs and set largely those of the female sex if that is what you wish.

We do not state that this method is absolutely 100 percent perfect, but if you can save 50 per cent to 7 5 per cent of your eggs it is a great saving to you. Tests have been made where 96 per cent to 98 per cent of the eggs proved to be true to the sex as determined by candling, and about the same per cent proved true in the sex of the baby chicks when tested by the method illustrated in this book.

We have included other ideas in this volume which we feel will be of equal value to the poultryman who might become the possessor of same. The ideas advanced as to correct methods of hatching, brooding and the rearing of chicks are equally valuable.

For the reason that we are forced to pay Mrs. Fry a large royalty on this book, we are forced to ask the price at which the book is advertised. However, we feel that there are several ideas advanced in this volume, any one of which is worth far more than the cost of the book. We are offering these ideas to the poultry world with the belief that they will be of inestimable value, and you will be personally benefited by same.

How to Tell The Sex of An Egg.jpg   (image/jpeg)