The American Standard of Perfection 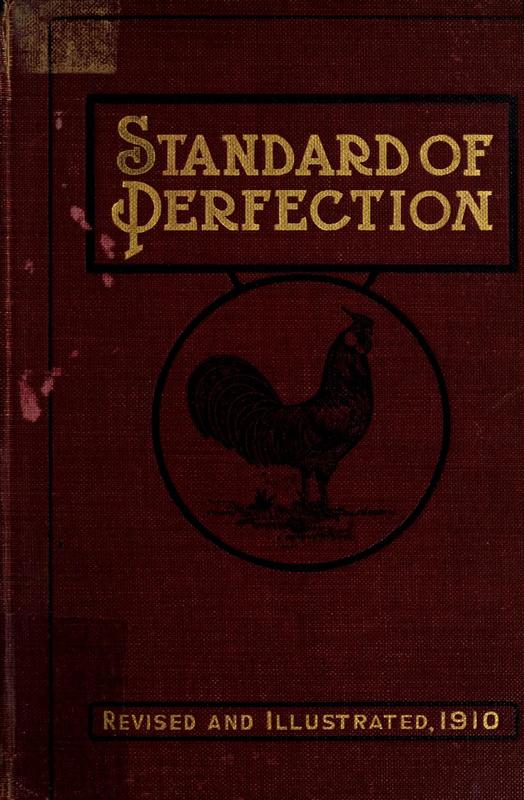 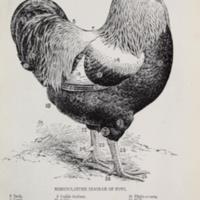 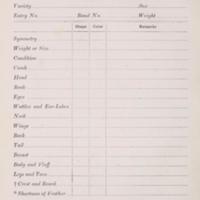 The American Standard of Perfection
Revised and Illustrated

The American Poultry Association was organized at a meeting held in the city of Buffalo, New York, February 15, 1873. The attendance was composed principally of delegates from state and county associations, prominent breeders and fanciers from different parts of the United States and Canada, and other interested persons. The object was to formulate and adopt a standard of excellence to be used exclusively by associations in awarding prizes on exhibition poultry. A constitution and by-laws were adopted, and a complete standard was made for all the then-recognized varieties of domestic and ornamental fowls. Mr. W. H. Churchman, of Wilmington. Delaware, was the first president, and Mr. J. M. Wade, of Philadelphia, Pennsylvania, the first secretary. Provision was made for annual meetings, at which changes could be made in the adopted standard, and matters of national importance concerning the poultry interest might be considered and acted on.

Nearly every large city and poultry center of importance has been visited in turn by these annual meetings. The work of standard making was so well done in the beginning that but few changes, and those of minor importance, have been found necessary. New breeds and varieties have been added; but the policy has been, and is, to admit only such as have become well established, and that clearly are entitled to the distinctive term, "standard-bred."

The first edition of the Standard was printed and issued to the public in February, 1874. It has been followed by others containing such changes and additions as have been made from time to time by authority of The American Poultry Association. The American Standard of Perfection, as now given to the poultry world, contains all changes in and additions to the constitution and by-laws, and the text of the Standard, as authorized to the present time.

The first illustrated revision was begun by the appointment of an Editorial Committee at Chicago, January, 1901, and the appointment of a Committee on Illustrated Standard, at Buffalo, in October, 1901. At Cleveland, December, 1902, these two committees were merged and the number of members increased to fifteen. Several weeks were devoted to the work of carefully revising the description of every variety.

The proposed changes and additions were fully considered, and there was much discussion in the poultry press. Prominent fanciers and breeders, representatives of specialty clubs and foremost poultry artists were called to the assistance of the Committee on Revision. The committee's completed report was presented at the twenty-eighth annual meeting of The American Poultry Association, held at Rochester, New York, February 2, 1904. After four days of earnest consideration, resulting in further amendment, it was adopted by unanimous vote, and ordered published in book form as herewith presented.

The descriptions and illustrations now published in this latest revised edition of The American Standard of Perfection are those agreed upon by the high authorities consulted, as correct representations of ideal specimens. In the conception and formation of these ideals, the artistic in form and color, and the possibilities of nature, were the guides, while beauty and utility are the results sought to be obtained. With this brief foreword of explanation, the present edition is offered to the public, in the interests of poultry culture.