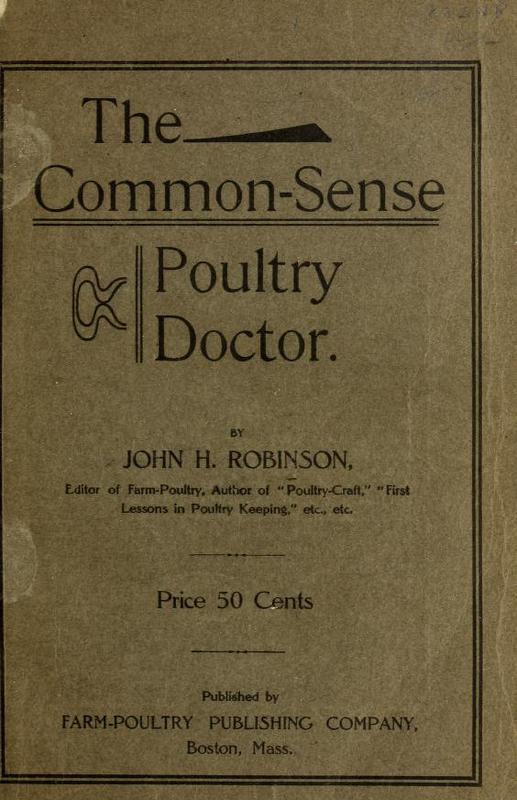 Of works on poultry diseases a goodly proportion are by men who may be considered specialists, professionals. They are doctors of veterinary surgery, or regular medical practitioners whose interest in poultry naturally led them into the investigation of poultry diseases.

Why, then, another book on poultry diseases, and by an author without medical education and training?

The conditions of poultry doctoring are peculiar. The ordinary individual fowl is of such small value that a single examination or treatment by a medical practitioner would cost more than the fowl was worth. For this reason professional medical attendance on sick fowls is almost unknown. Occasionally, in case of an epidemic which completely baffles him, a poultryman calls in one of the few qualified practitioners who respond to such calls when their regular duties permit. In some of the states the services of experts connected with the State Experiment Stations or Agricultural Colleges may be secured in such emergencies. As a rule; however, every poultryman has to be his own poultry doctor, and treat his fowls according to his judgment, aided sometimes by such light as he can get from books or from other poultrymen.

As a rule, the poultryman with no authority to consult, or in doubt after learning what he could from accessible sources of information, goes to the editor of a poultry paper for further advice, and, as a rule, the editor, if he can help the inquirer, is able to help him because of a little more experience with sick fowls, familiarity with the literature of the subject, and constant practice in deciphering from amateur descriptions the symptoms which enable him to identify the disease at least accurately enough to direct his correspondent where to look for information that will help him to a better knowledge of the case and its causes and the methods of treating it.

So it came about that engaging in editorial work on a poultry paper I had to renew the study of poultry diseases which, as a practical poultryman, I had discontinued years before, and considering them always from the non-professional point of view, from the standpoint of the practical poultryman, I appreciated, as a professional medical man probably would not, the difficulties encountered by the layman using some of the best works on poultry diseases. The work on diseases which I have myself found by tar the most valuable for reference became satisfactory only after constant use had made me familiar with its contents. Even this work, though far more exhaustive than any other, is not complete. It contains nothing or scant information on a number of matters that are frequently the subject of inquiry, and it treats some diseases in such a way that not many using the book would discover the connection between a case of the disease and the treatment of it here. The smaller books are quite generally not explicit enough. In nearly all works on diseases of poultry a knowledge of the name, or at least the general character of a disease, is the first requisite in a search for information about it. This is precisely the knowledge that most of those consulting a book on poultry diseases go to it for, and the books are therefore deficient in the very feature which would make them most helpful to poultrvmen using them most — that is, to beginners.

In this book I have tried to develop a method of diagnosis especially suited to those not familiar with the various poultry diseases. It is not the professional method, and I do not suppose that it would be of much use to a professional, but I trust the novice in the treatment of sick fowls will find it practical and helpful. It is approximately the method evolved by the peculiar conditions under which I have to advise about sick fowls, and though it has its defects and its limitations. I think that most of those not able to recognize and name diseases by their visible symptoms will find it more satisfactory than anything yet offered them.

This method of diagnosis, the more complete list of diseases treated, the strictly popular style of the work, and the attention given many minor details which the professional writers have too often assumed everyone knew, are the special features which seem to me to furnish the reasons for another book on poultry diseases. Its object is to supply a connection which seems to be too often missing between those who need and those who have knowledge of the subject; and it is on such a basis that a non-professional may r with propriety, venture to treat the subject of poultry diseases. For the matter of the book I have drawn freely on the standard writers on the subject, and, in general, have followed them in statements of symptoms, treatment, etc., but occasionally have supplied a fact from personal knowledge, and I presume that comparison would show here and there a variation from advices of* such authorities as to the advisability of treating, though, on the whole, those authorities agree with the body of experienced poultry keepers in regard to the general unprofitableness of doctoring.