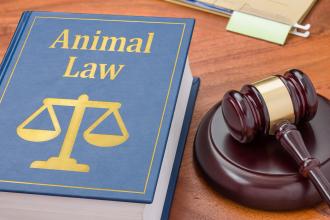 Animal welfare legislation has been in place since the early 1600’s when the Puritans were settling in the New England colonies. Over 200 years later, in 1828, New York became the first state to pass an animal anti-cruelty law (N.Y. Revised Statutes, Title 6 Section 26, 1829). Many other states followed suit a few years after. Since then, all states have established their own animal welfare and anti-cruelty laws in addition to the current federal laws. Use the resources below to learn about state laws related to animal cruelty, commercial breeding, retail sale of pets, farm animal confinement, and more!

Each state has laws to protect animals against cruelty, but these laws can vary greatly from state to state. Use The National Agricultural Law Center's clickable United States map to view each state's animal cruelty laws.