Charles Edwin Kellogg (1902-1980) served as the head of the Soil Survey in the United States Department of Agriculture (USDA) for 37 years (1934-1971). The collection spans the years 1902-1980 and primarily contains materials relating to his career as a soil scientist and the history of the Soil Survey. There are manuscripts; publications, such as articles and reports; photographic prints and slides; travel journals; field notebooks; Kellogg's curriculum vitae, or autobiography; correspondence; newspaper clippings; and honors and awards. The materials are in good condition and make up 10 series.

Kellogg kept detailed records of his professional and personal activities. His field notebooks (Series VII) span five decades and are full of the handwritten notes and observations he made while traveling and at conferences, meetings, and in the field both in the United States and abroad. The curriculum vitae (Series I), a combination of an autobiography and a journal, is a more polished account of Kellogg's daily life. In it he recounts details ranging from his work at the Soil Survey to the care of his home garden.

Kellogg traveled extensively for conferences and as a researcher and consultant. His travels included visits to various countries in North America, Europe, Africa, Asia, and Oceania. Filled with research notes, journal entries, photographs, and ephemera, his travel journals (Series VI) are a rich source of information on world soil survey and agricultural efforts as well as a variety of cultures. Kellogg's photograph and slide collection (Series VIII) also provides considerable documentation of his domestic and international travels and depicts soils, agriculture, local people, and Kellogg and colleagues in the field.

One of Kellogg's interests was in compiling a history of the Soil Survey. He kept an extensive research file (Series V) on the organization of the Soil Survey and the Soil Conservation Service (SCS), the people involved in their development, and major events in their history. In addition, Series VIII contains many contemporary and early photographs of USDA soil scientists.

A large part of the collection consists of the literature that Kellogg produced relating to soil science. A prolific writer, Kellogg authored several books and over 200 published articles, bulletins, and reviews. Many of his works were USDA publications and reports for the Soil Survey and the Soil Conservation Service (SCS); however, he also published numerous articles in scientific and popular journals. His most notable books include the first Soil Survey Manual (1937), The Soils That Support Us (1941), Our Garden Soils (1952), and Agricultural Development: Soils, Food, People, Work (1975). Kellogg delivered a significant number of speeches and lectures. He was a guest on radio and television talk shows, and he spoke at universities, colleges, and conferences as well as at local civic and interest groups. In 1947, he was appointed National Sigma Xi Lecturer and spoke on soil science to some 30 chapters throughout the United States. Originals and photocopies of Kellogg's published works can be found in Series II, while many of Kellogg's drafts, unpublished works, and speeches and lectures can be found in Series III.

While working on research, especially his book Agricultural Development: Soils, Food, People, Work (1975), Kellogg amassed many publications and unpublished works which he placed into research files (Series IX). These publications and unpublished works, some of which were annotated by Kellogg, were written by various authors on topics related to agriculture and soil science.

Kellogg was an avid book collector, and his personal library was donated to the National Agricultural Library (NAL) along with his papers. The collection consists of approximately 2,000 books, monographs, and bound serials relating to international soil science and all aspects of agriculture. Publication dates range from 1745 to the 1970s. While the majority of the collection is in English, many languages are represented, including French, Dutch, German, Icelandic, Portuguese, Spanish, and Russian. No detailed listing of the book collection currently exists, and the books have not yet been catalogued. However, the collection contains rare imprint editions of the following works: Of Husbandry by Lucius Moderatus Columella (1745); Elements of Husbandry by Sir Humphrey Davy (1813); A Practical Treatise of Husbandry by Henri Louis Duhamel Du Monceau (1759); An Essay on Calcareous Manures by Edmund Ruffin (1832, 1853); Horse-Hoeing Husbandry by Jethro Tull (1829); Five Hundred Points of Good Husbandry by Thomas Turner (1812); and The Essence of Agriculture by Charles Varlo (1786). 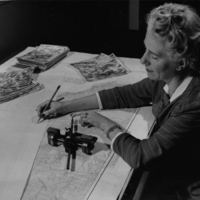 Determining the total acreage of each soil by use of the planimeter (Scale of Base 1/31,680)

Photograph of a woman at a table, using the planimeter tool and recording data on a large paper spreadsheet. 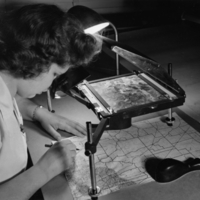 Photgraph of a woman who appears to be drawing boundary lines on a map with the aid of a vertical sketchmaster. 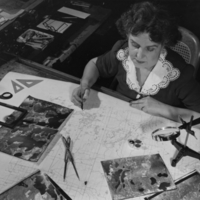 Photograph of a woman at a drafting table with drafting tools, magnifiers, and a large map. 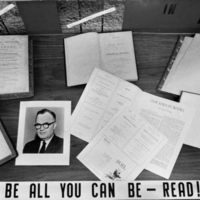 Be all you can be--read!

Transcript of caption provided with image: An avid book collector, Dr. Kellogg's foreign travels provided many opportunities for him to acquire important scientific publications in his area of discipline and research interest. Having formed lasting… 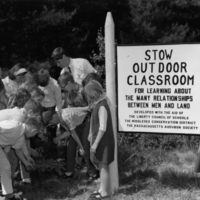 Photograph of school-aged children examining a plant. A sign on the right side of the photograph reads, "STOW OUTDOOR CLASSROOM. For learning about the many relationships between men and land. Developed with the aid of the Liberty Council of Schools,… 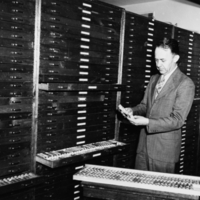 Photograph of a scientist with four tubes of soil in hand. Beside him is a row of tall filing cabinets with three drawers open, showing dozens of soil sample vials. 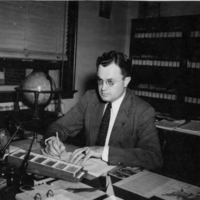 Kellogg working at his desk

Photograph of Charles E. Kellogg in his office. He is writing on a notepad and appears to have a tray of soil samples in front of him. 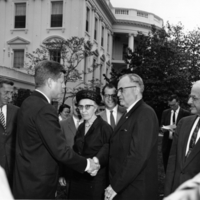 Photograph of Kellog and Kennedy shaking hands amoun a small crowd of people on the White House lawn. 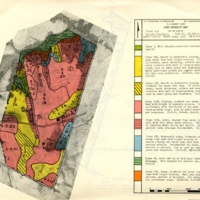 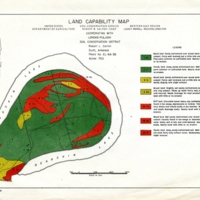 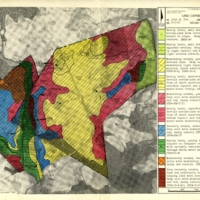 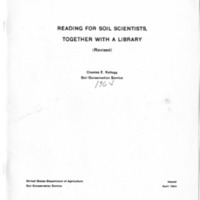 Reading for soil scientists, together with a library (revised)

From the introduction to the list. May contain errors from the OCR process. FOREWORD This essay and book list for students of general soil science developed gradually between 1930 and 1940, when it was first published in permanent form in the… 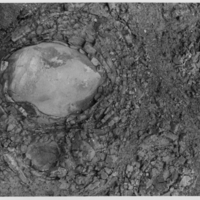 Picture in a road cut showing concentric weathering of lava boulders near Kilauea. 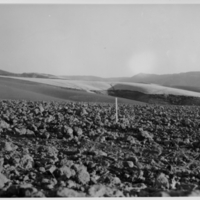 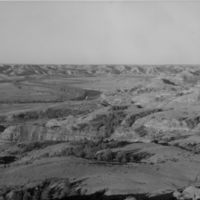 Badlands at the bridge over the Little Missouri River south of Watford City, North Dakota.