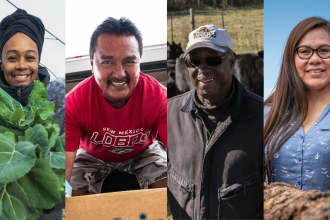 Environmental Justice (EJ) is the fair treatment and meaningful involvement of all people regardless of race, national origin, sex, or income with respect to the development, implementation and enforcement of environmental laws, regulations and policies.

The United States Department of Agriculture (USDA) is committed to working in collaboration with Federal, State, Tribal, and local governments, along with non-governmental organizations, and private individuals, to address conditions that place communities at risk and assist communities to achieve environmentally suitable living conditions and ideally, healthier lives.

The environmental justice movement began through the activism of people of color addressing environmental and economic burdens such as poor air and water quality, lack of access to land and nutritious, culturally relevant foods. The movement gained national attention through the 1960s and 80s during the Memphis Sanitation Strike, the class action lawsuit against Southwestern Waste Management in Houston, TX, brought by the Northeast Community Action Group, and peaceful protests against toxic waste dumping in Warren County, North Carolina; one of the few majority black population counties in the state.

Issues of environmental deprivation go back much further, though. Since first contact, the removal of indigenous peoples from their lands and the institution of slavery, people of color on the land that would become known at the United States have faced dispossession. Their fight continues through protests, federal and state lobbying, and grassroots action and activism.

​​​​​​The Federal Government is dedicated to empowering individuals and communities; particularly in ways that promote and protect national public health and the environment, while conserving our national treasures and monuments. It is committed to guidance from scientific research to improve health, protect the environment, ensure access to clean air and water, and healthy, culturally relevant food.